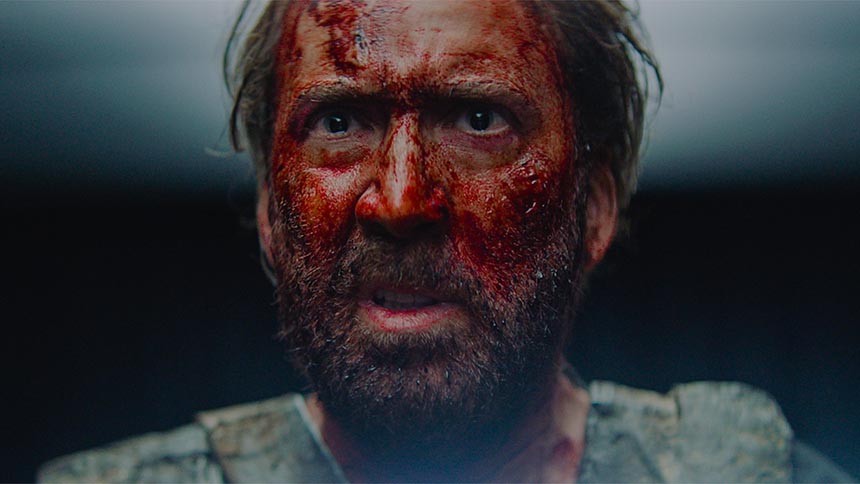 In describing Panos Cosmatos' Mandy, the first word that comes to mind is 'admiration.' The picture reflects the singular, unique, and uncompromising vision of its director.

Producing an auteur-driven horror film is an admirable feat in a business that often favors quantity over quality. Accordingly, it should come as no surprise that it took eight years for Cosmatos to produce his follow-up to cult classic Beyond The Black Rainbow. Fortunately, his sophomore effort proves worth the wait.

The storyline of Mandy is simple enough to write on the back of a napkin. The year is 1983. Lumberjack Red (Nicolas Cage) and his partner, the titular Mandy (Andrea Riseborough), lead an idyllic existence in the rural Pacific Northwest. Not surprisingly, evil lurks in the surrounding woods. Said evil takes the form of a religious cult allied with a demonic biker gang.

Cult leader Jeremiah (Linus Roache) spots Mandy on a walk in the woods. He wants her. He orders the bikers to abduct her. Jeremiah looooooves his abductee. He woos her with LSD and music inspired by The Carpenters. Mandy rejects his advances. He gets pissed. Jeremiah and Co. immolate her as Red looks on.

Red embarks upon inevitable revenge. Fueled on coke and other drugs, he employs crossbows, chainsaws, and other weapons to pick off bikers and cult freaks Kill Bill-style. Cosmatos appreciates a good kill scene and even jaded genre fans will enjoy some of the creatively gory ways that characters die in the picture.

While this ur-story of murder/revenge could be recounted in half the time, the pleasure of this picture depends far more upon execution than suspense. Under miasmic layers of 16mm and 35mm, the film plays out like a fever dream one might experience after passing out in an all-night grindhouse on the Deuce. Its rich phantasmagoria of saturated colors, lens flares, and intricate lighting strategies recall the imagery of Henry-George Clouzot's Inferno. Heavy Metal also figures prominently in several animated sequences that would do Moebius proud. And the ominous synth-driven prog-rock score from Johan Johansson makes for the perfect retro soundtrack.

Most importantly, Nicolas Cage delivers a delightfully over-the-top performance that recalls his work in Werner Herzog's Bad Lieutenant: Port of Call New Orleans, another wolf of an arthouse pic dressed in genre's clothing. Though deadpan serious on the surface, his character adds an element of humor that distinguishes Mandy from the unrelenting dourness of Rainbow. This film possesses a self-awareness that keeps it from becoming self-indulgent.

Mandy may prove divisive; some people will have trouble processing a genre film with Bergmanesque pacing. In many ways, Mandy is to early 80s occult-horror psych what Anna Biller’s The Love Witch was to early 70s occult-horror psych.  Running at 120 minutes each, both films provide a feast of visual delights but you need to accept them on their own plodding terms. However, if you can get into the creator’s headspace, then this film is a journey worth taking.

(Full disclosure: ScreenAnarchy founder and editor Todd Brown is the Head of International Acquistions for XYZFilms, which is handling worldwide sales for the film. He was not involved in the writing or editing of this review.)

Do you feel this content is inappropriate or infringes upon your rights? Click here to report it, or see our DMCA policy.
Andrea RiseboroughNicolas CagePanos CosmatosSundanceSundance 2018