Weeeeeell... the end result, called Valerian and the City of a Thousand Planets, kinda flopped hard. Luc Besson wasn't the only one dreaming about a Valerian film: I, a confessed Valerian-comic-mega-fan, had been waiting for as least as long for someone to bring this to the big screen in a proper way. And even I had problems catching the film, as I was on holiday when it premiered and it was almost already impossible to find when I returned, a mere two weeks later!

I know people who utterly hate this film. I myself don't; I love that universe, I think the beginning rocks, and when I popped in the Blu-ray disc to re-watch a scene or two I actually kept watching for more than an hour, usually a very good sign. But I will fully admit that the two main characters, Valerian and Laureline, seem ridiculously off-key when compared to their graphic novel counterparts, even though their world(s) have been beautifully captured.

Anyway, if anyone was going to be be giving this film a pimped home edition, it was going to be the French. And WHOA.... they delivered. But be aware of two things: first, it's hella-pricey. Second, it's only French-friendly, not English-friendly: even though the English dub is on there, all alien languages and captions only have French subs, and the same goes for all the extras.

So with that in mind, here is a gallery of shots. Click on the edge of the pictures to scroll through them, or at the center of each to see a bigger version. 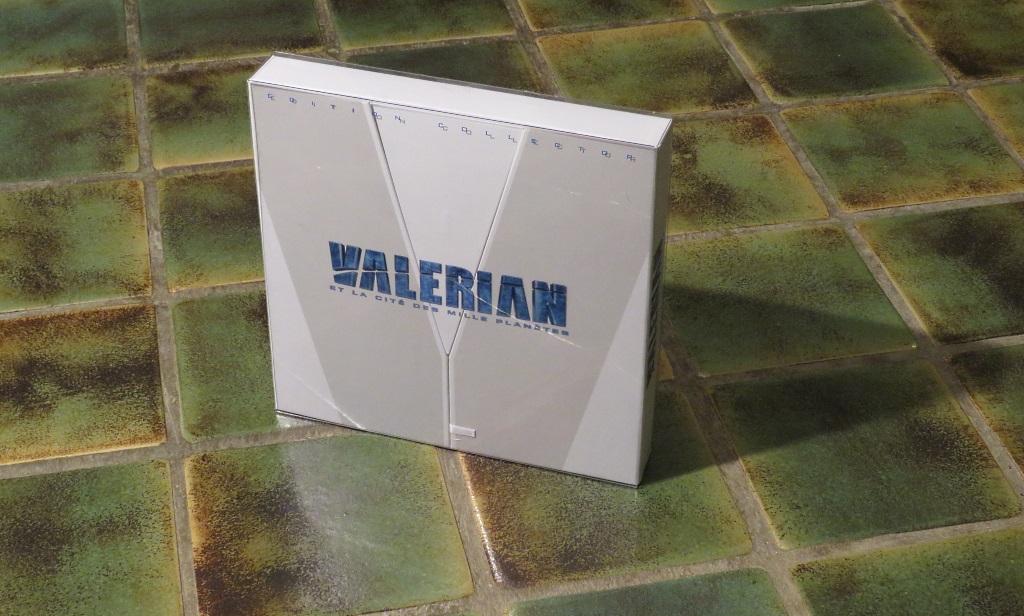 And here it is: a big, BIG box in a translucent slipcase. 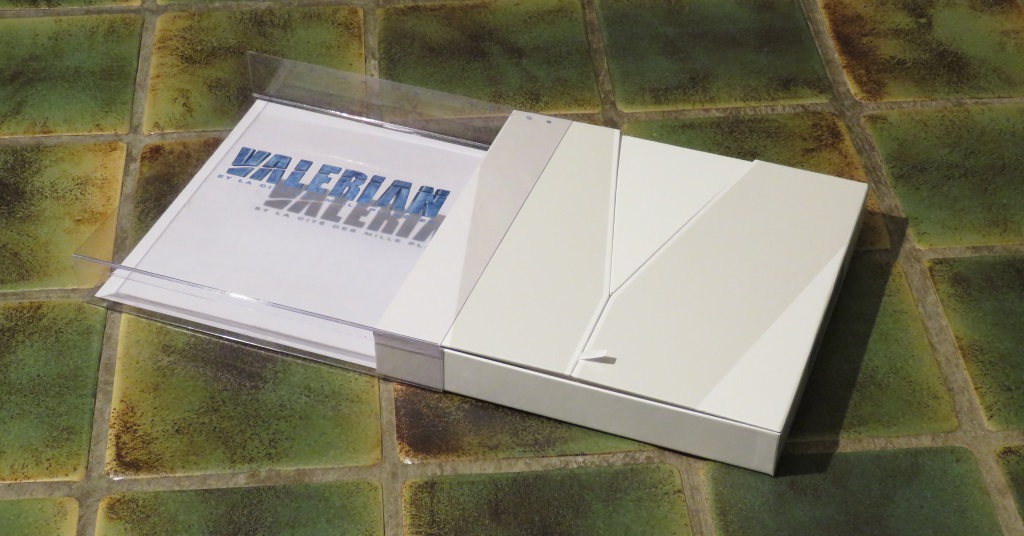 Taking the box out of the slipcase, leaving only the large "V"-shape on the front (and a tiny pull-lace).

Opening the box is a fun affair: the front opens in three lids, all stuck together with magnets. 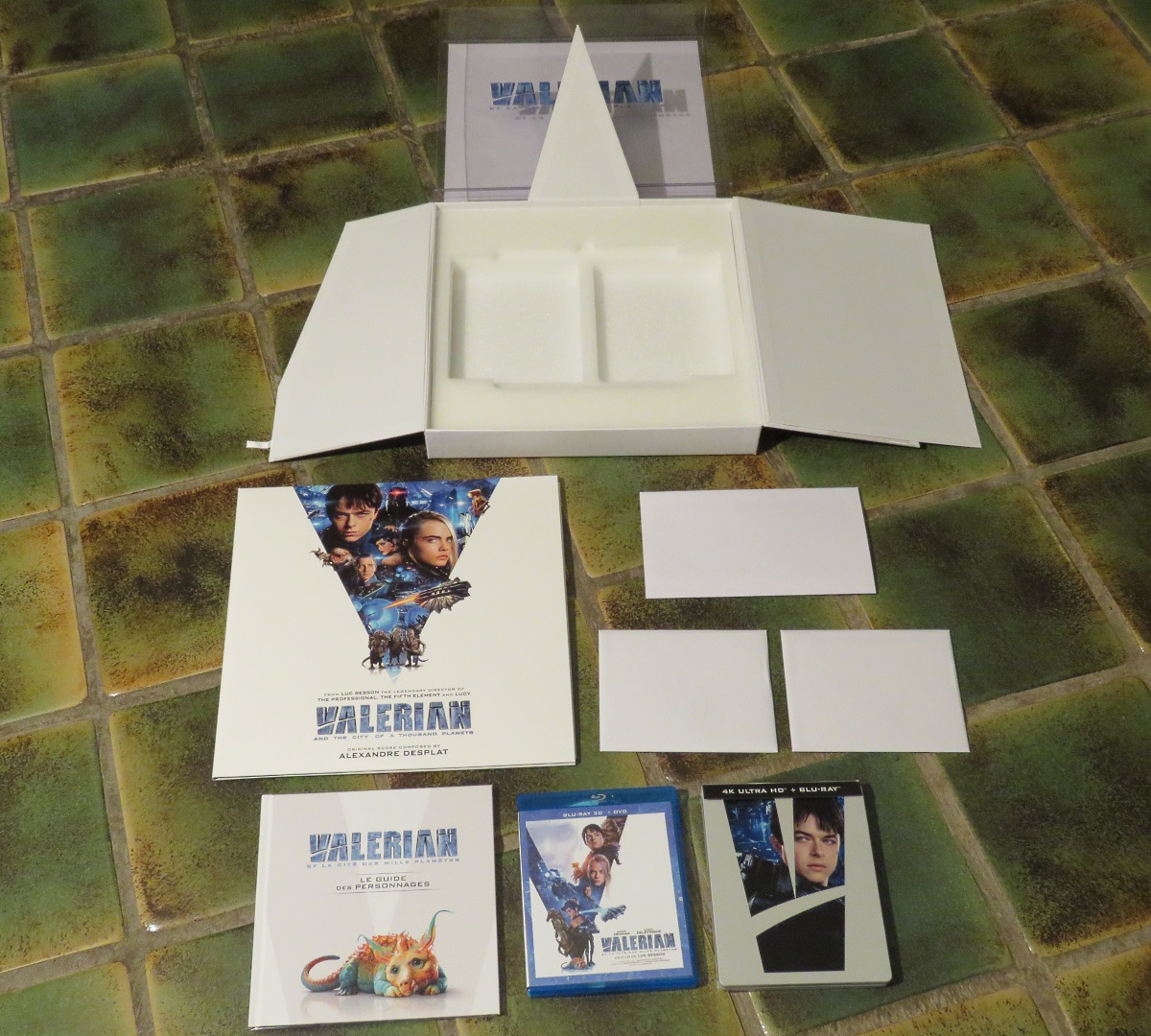 All contents taken out: the steelbook, which has the film in 4K Ultra-HD and regular Blu-ray, an Amaray with the 3D Blu-ray and the 2-disc DVD version, a 52-page character booklet, three envelopes with art cards, and the soundtrack on double vinyl. Whoa! 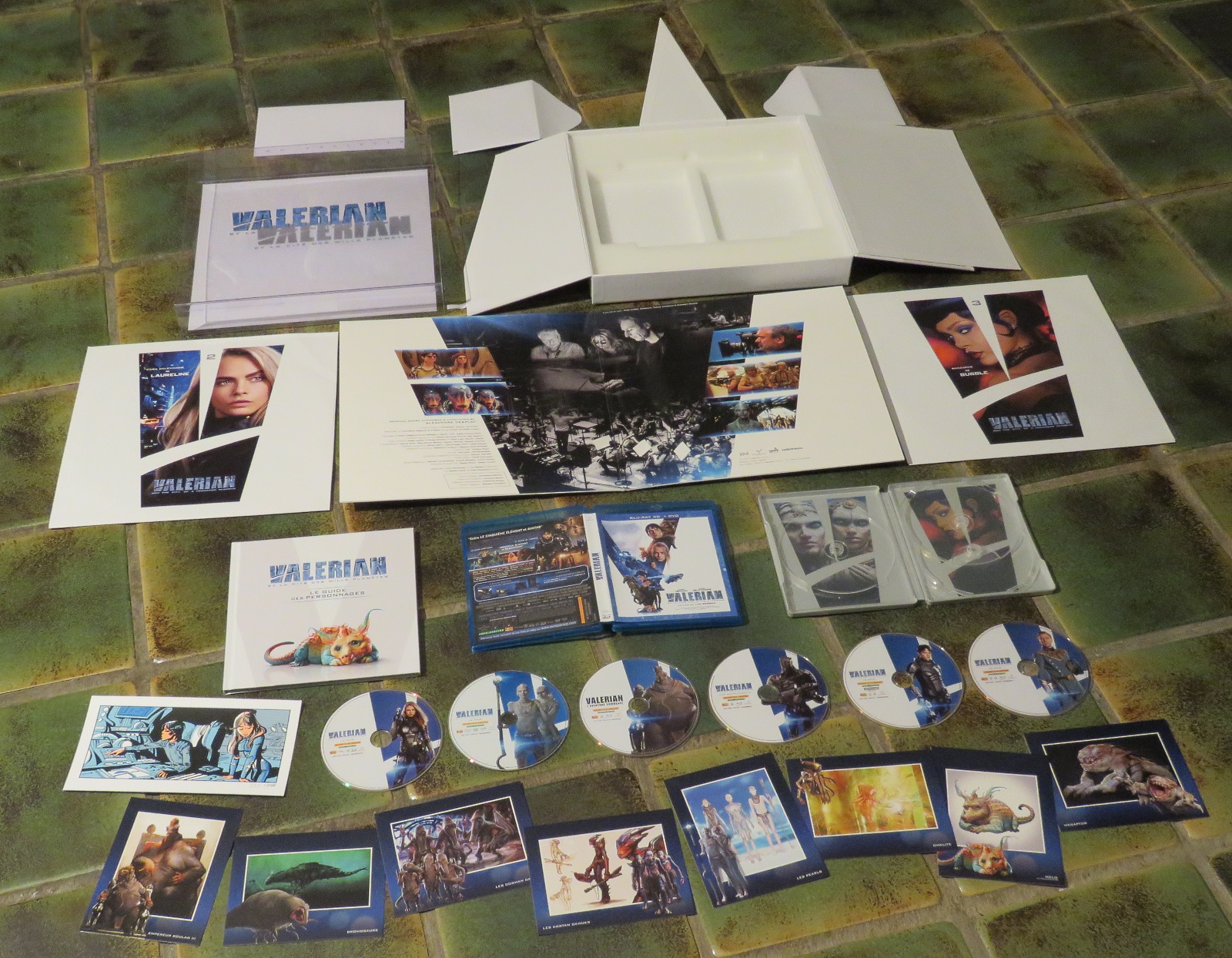 All contents opened up.
I had to move furniture again to take this shot. 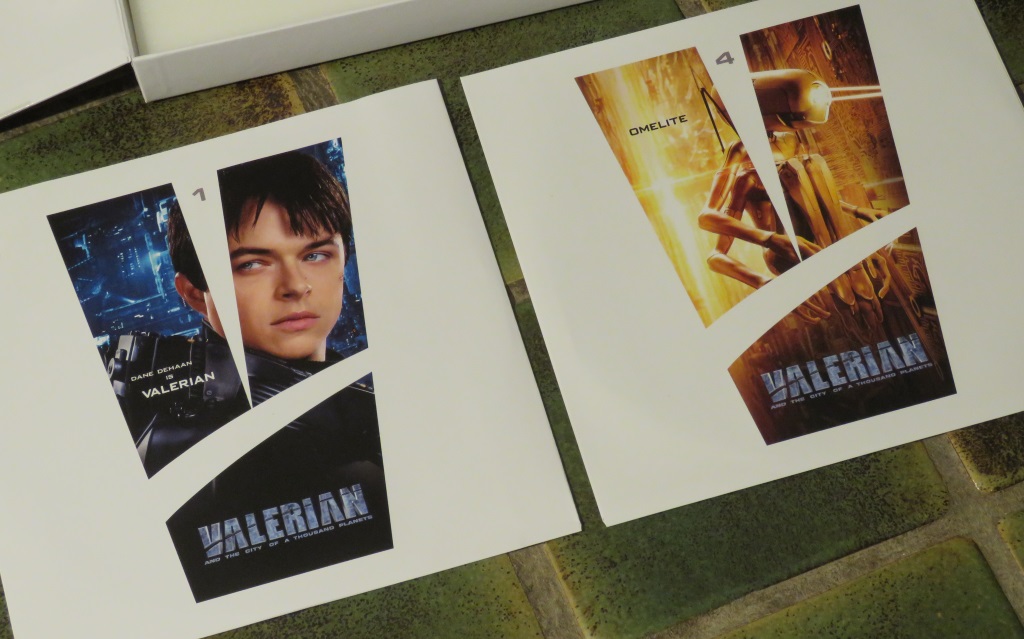 The flip-sides of the vinyl records. 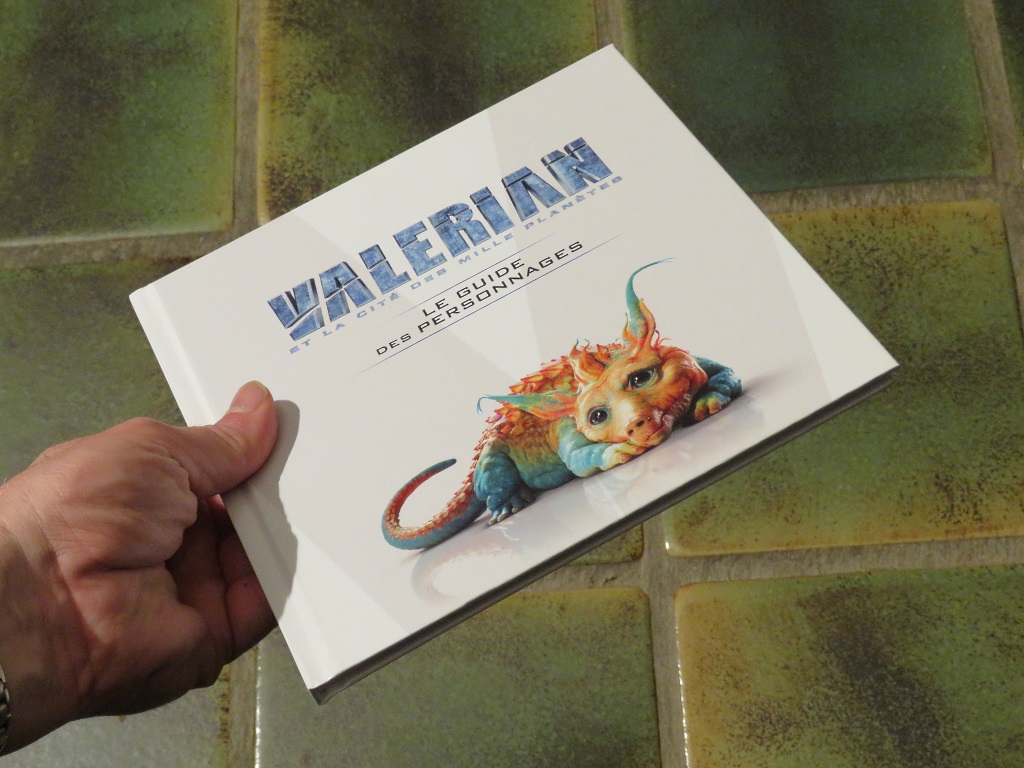 Here's the booklet, which is of a nice size and hardcover.

At 52 pages, its contents are slim though. You get character definitions and backgrounds but that's it. No making-of or extensive designs unfortunately, though to be honest the on-disc content covers lots of that. 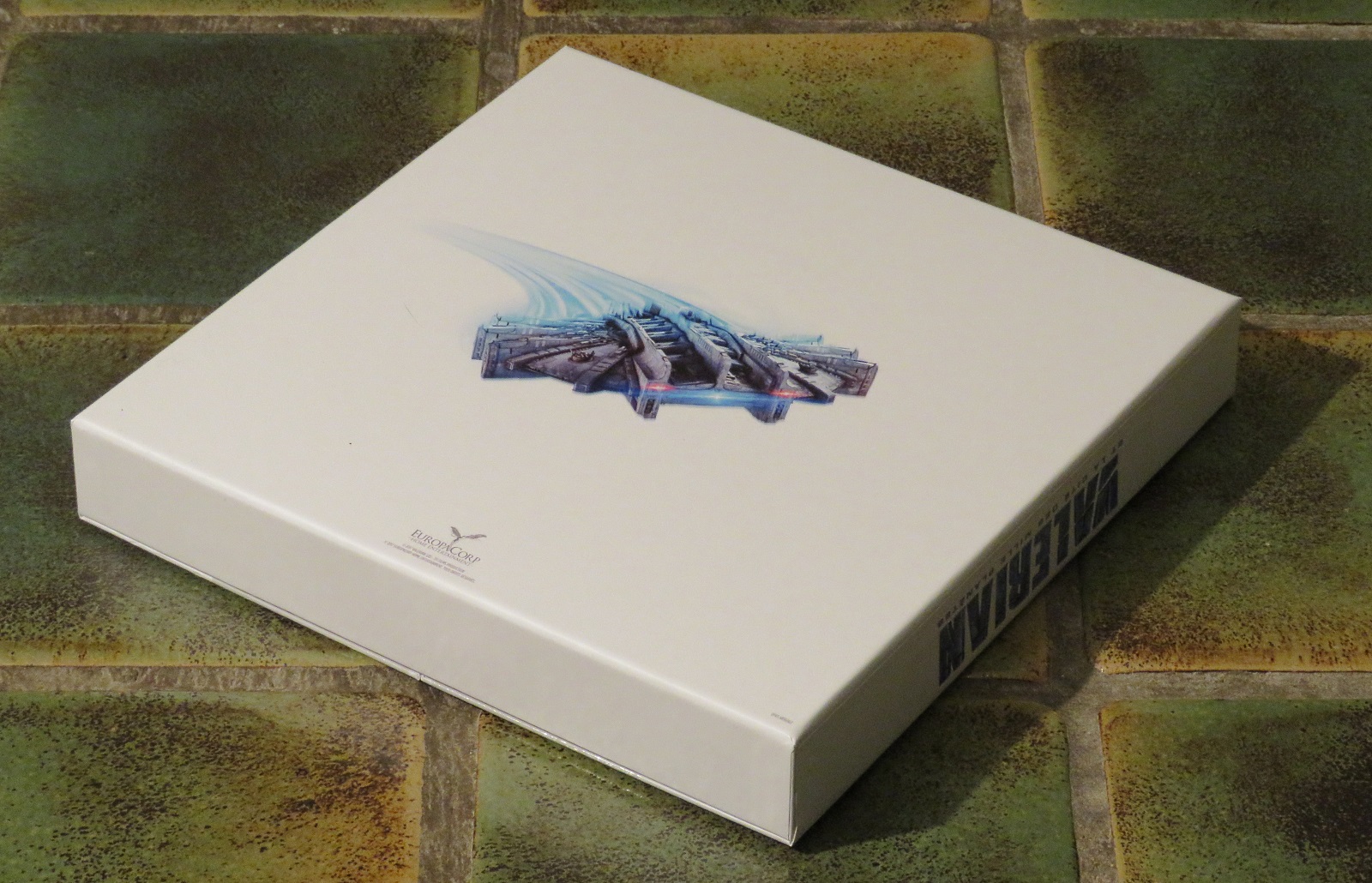 The (back)end of a pimped edition.

Will we see Valerian again? Besson planned a number of sequels, but the box office of the first film does not inspire confidence... time will tell!