Review: VALERIAN AND THE CITY OF A THOUSAND PLANETS, Lush Visuals And Lackluster Everything Else 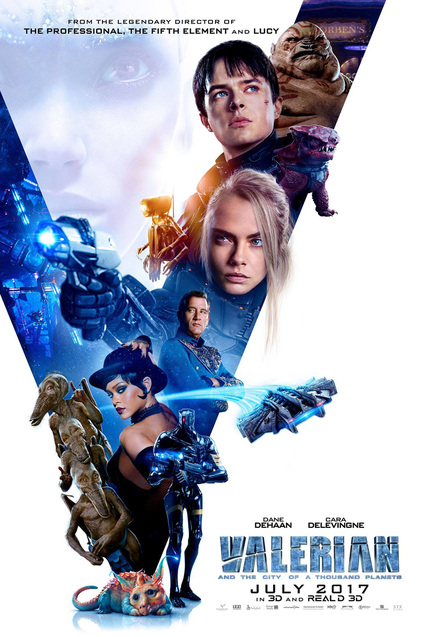 In Luc Besson's latest film, the extravagant science-fiction, hypercolor seizure Valerian and the City of a Thousand Planets, a pair of space cops set off on a devil-may-care adventure to save the universe. Or something like that.

Valerian (Dane DeHaan) and Laureline (Cara Delevigne) are the above mentioned space cops, but not just any space cops, they are the super space cops, the ones who get the call to complete the impossible tasks. After completing the particularly tricky job or stealing a rare creature from a transdimensional and nigh infinite flea market, they are summoned to Alpha, the titular city of a thousand planets to deliver the goods and continue the mission.

The next leg, however, presents a bit of a problem as their oddly douchey commanding officer is quickly abducted and the pair takes off after his captors. What follows is a chase through Alpha toward a mysterious and forbidden inner zone that may house the end of the world as they know it.

Besson is one of my absolute favorite filmmakers, and one of the great remaining European auteurs to have survived the last thirty years, largely making esoteric popcorn films. In his best work, films like The Professional, The Fifth Element, La femme Nikita, and even the recent underappreciated gem Lucy, Besson is a force of nature who manages to concoct wild stories that frequently teeter on the edge of spinning out of control. Absurd stories are kept in check by rich screenplays and tender performances from actors who, under Besson's careful eye, are able to deliver heart-wrenching emotional performances even in the most ludicrous circumstances. Until now.

There is no doubting Besson's sci-fi chops at this point, I've gone on record stating that The Fifth Element is as close to a perfect science fiction film as I'm ever likely to see. However, as amazing and groundbreaking as the visuals of that film were, that's not what made it great. The unmistakable chemistry between the I'm-getting-too-old-for-this-shit former cop Dallas (Bruce Willis) and the too-pure-for-this-world Leeloo (Milla Jovovich) was the real heart beating behind the flash.

The same goes for The Professional, while it was in no way science fiction, it is an equal contender to the throne of greatest action film of the last 25 years. And again, as great as the action is, the film would be nothing without the tender relationship between Mathilda (Natalie Portman) and Léon (Jean Reno). Which is why Valerian is so disappointing.

Valerian and the City of a Thousand Planets is a supremely indulgent mess of a film, which in Besson's hands would normally have been just fine and dandy. However, the writing and acting performances fail to live up to their most basic requirements: (1) make sense, and (2) make me care.

From the very beginning of the film, the relationship between Valerian and Laureline is a will-they-or-won't-they tease that never really leaves much to the imagination. Their destination is clear, there's a bit of attempted fun in the twists and turns along the road, but there's no thrill of the chase from either character. In this case, the blame lays equally at the feet of Besson's screenplay and the performances from DeHaan and Delevigne - which circles back to Besson anyway.

I don't think I've seen a more impressively dense charisma vaccuum than the coupling of DeHaan and Delevigne in this film. Both performers are absolute wisps in roles that may not exactly demand a Dwayne Johnson or a Jason Statham, but at least some physical presence would've made them a lot easier to believe as intergalactic ass-kicking machines.

Delevigne's wooden performance in the ill-fated Suicide Squad was one of the worst things I saw last year, but I chalked that up to a mess of a production and the director not knowing what to do with her, or anyone else in that film. However, her performance in Valerian is somehow even less engaging, leaving me to question whether she's even a real performer or just a text-to-speech app that someone fed the Laureline dialogue into.

DeHaan does a bit better with his material, though it's largely the fact that his character is written much smarmier and more arrogant, and while those are not exactly endearing character traits, they are at least easily demonstrable. Though they state their feelings for one another over and over again throughout the film, it's hard to believe any of it when it just sounds like a couple of chess computers talking to one another.

Unfortunately for the pair, they were easily shown up by some of the more capable supporting cast at every opportunity. Notably interesting to watch were Sam Spruell as General Okto Bar, one of Valerian and Laureline's immediate superiors, Clive Owen as Commander Arün Filitt, John Goodman in a voice-only appearance as the black marketeer Igon Siruss, and a trio of conveniently well-informed cutesy aliens known as the Doghan Daguis. While no one exactly steals the show, these characters provide some welcome tension, emotion, and often levity to the frequently flat character dynamic between the leads.

All that said, Valerian and the City of a Thousand Planets is often an absolute hoot to watch. There is no denying that very few visual stylists can do what Luc Besson can, and he's at his untethered best here. Though the set pieces often feel as though they're more than a little inspired by other films - including Besson's own - he manages to cast them in a new light and extend the boundaries of what those previous works were capable of depicting.

There are obvious traces of The Fifth Element throughout the film, both in terms of plot and character design, which shouldn't be surprising since one of the writers on that film is the co-creator of the Valerian and Laureline comic on which this film is based. However, it doesn't end there, there are touches of Star Wars (the good ones), Men in Black, Hellboy, Harry Potter, Blade Runner, and many, many more throughout the film. Besson incorporates and embellishes those influences to match his own aesthetic, and it's amazing to watch.

The lack of tension between the characters from the very beginning coupled with a clumsily told story that requires a exposition dump in the third act that you can practically hear hitting the floor the second it begins, making Valerian a bit of a slog at well over two hours, and that's just criminal. At the end of the film, Valerian says to his cohort that he's afraid she'll just have to spend two hours alone with him as they journey to safety. It's meant to be a romantic intimation, but unfortunately it sounds more like a threat by the time it rolls off his lips.

Yes, it's a very sparkly movie, and I enjoyed watching Besson's imagination run wild all over the screen, but there just isn't enough "there" there, and really just makes me want to watch The Fifth Element again.

I think I'll go do that.

Do you feel this content is inappropriate or infringes upon your rights? Click here to report it, or see our DMCA policy.
Cara DelevigneClive OwenDane DeHaanFranceLuc BessonRihanna