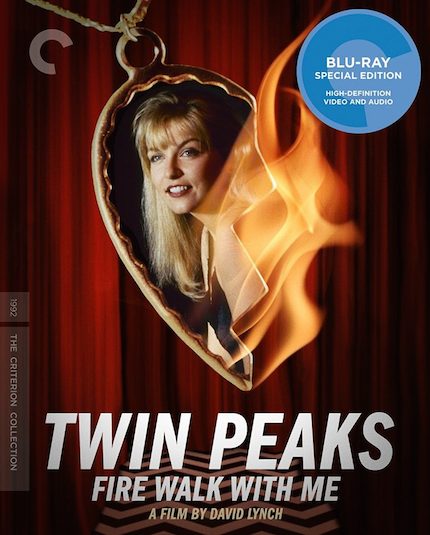 David Lynch's oft-maligned film Fire Walk With Me has been recently released by the Criterion Collection, and it's way past time. The film has also steadily been gaining acceptance for daring to be much, much darker than the television show --- finally. But better late than never, right?

The stand-alone film --- made after the first two seasons of Twin Peaks --- goes back to the sleepy Northwestern town and tells us (or more appropriately, shows us glimpses of) what happened during the last seven days of Laura Palmer's life. Gone are the kooky, simple exchanges of the townspeople between the real meat of the series --- and this is one reason why Fire Walk With Me was condemned. However, this was precisely why this film always worked for me, and I'm glad people are finally coming around decades later.

Fire Walk With Me was so much more bleak than the TV series was ever allowed to be; one: because you're dealing with the last week of a doomed teenager's life, and two: one film can only allow so much running time. The film is horrific, weird, touching, and conjures emotions that sometimes can't be put into words.

Here, Sheryl Lee (Laura Palmer) channels hysterics on both ends of the spectrum when she giggles uncontrollably when playing high, and again when she realizes who her abuser really is. Lee is fantastic in ways that few actors can reach, and it is a marvel to watch her work. I wish we could have been treated to more of her over the last few decades. Likewise, it's inspiring to listen to her speak about playing Laura and working with Lynch in one of the disc's bonus interviews.

Another bonus interview offers a great "chat" with Lynch's longtime, influential composer Angelo Badalamenti. The musician reveals the ins and outs of how he and Lynch came up with several of the themes within Fire Walk With Me, and Badalamenti proves to be one of the most entertaining subjects ever to watch and listen to when it comes to music in film.

Personally supervised by Lynch, Fire Walk With Me itself is beautiful to watch. The picture is absolutely pristine, and puts most films from the early '90s to shame when it comes to image alone.

The feature-length assemblage of deleted and alternate scenes entitled "The Missing Pieces" is interesting to watch, for me, but didn't shed any more light on the mysteries of Fire Walk With Me or Twin Peaks. Anything that offers more David Bowie is always welcome, however, and this release comes with my highest recommendations for fans of Lynch and American or surreal cinema.

You can watch the trailer below and check out more about this release on Criterion's page here.

Do you feel this content is inappropriate or infringes upon your rights? Click here to report it, or see our DMCA policy.
Angelo BadalamentiDavid BowieDavid LynchFire Walk With MeGrace ZabriskieRay WiseSheryl Lee

More about Fire Walk With Me