Review: THE KILLING OF A SACRED DEER, Strange, Cold and Horrifying 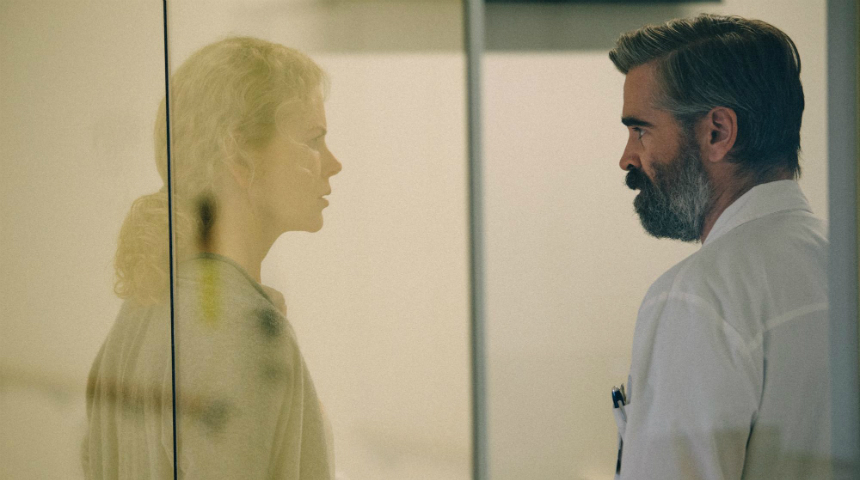 Human beings can be kind, generous, and loving. But they can also be self-indulgent, vicious, and cruel. We all want to believe that, under certain circumstances, we would sacrifice and fight for the lives of our loved ones. But would we? Or would we try to circumvent dire circumstances in order to save our own lives, sacrificing those we claim to love?

Yorgos Lanthimos' name has become synonymous with contemporary absurdism; the films that have made him one of the most lauded filmmakers in recent years -- Dogtooth, Alps, and The Lobster -- have mixed stories of families and relationships in the most strange of circumstances, combining black comedy, violence, and the crisis of identity. In his latest English-language production, The Killing of a Sacred Deer, he veers off course a bit with a scenario that is less absurd than horrifying.

Honing techniques inspired by Stanley Kubrick, combined with a story that would seem to be inspired by Michael Haneke, Lanthimos twists his absurdity in favour of a horror story.  A more straightfoward tale than his past films (albeit while employing the supernatural), this change of direction alloows him to play with horror tropes in a new way.

Steven (Colin Farrell) is a succussful cardiologist; his wife Anna (Nicole Kidman) is an equally successful opthamologist. He has conversations about watches with his friend Matthew. Steven and Anna live an ordered life with their two children Kim (Raffey Cassidy), who loves music, and Bob (Sunny Suljic), who won't cut his hair. In their lives, not a glass is shattered, not a picture frame out of place, and even the couple's sex life begins with coldness and order.

But Steven also spends time with Martin (Barry Keoghan), a strange teenage boy; they meet in diners, sit by the boardwalk, Steven even gifts Martin a watch. Is Martin Steven's illegitimate child? Are the two lovers? Steven invites Martin to his house for dinner and to meet the family. Steven then has dinner with Martin and his mother (Alicia Silverstone), who makes a pass at Steven. As Steven then tries to pull away form his relationship with Martin, Martin begins to stalk the family.

It turns out that Martin believes that Steven is responsible for something terrible, and in return, Martin wants Steven to do something equally terrible, or every member of the family will suffer. Steven dismisses it, but then Bob and Kim become ill. Harkening back to Greek tragedies, in which the sins of the father are suffered by the children, Steven must decide whether to sacrifice one in order to save the others, or allow them all to die, leaving him alone with his guilt.

So into this strange, cold, ordered universe of Steven and Anna comes an evil presence. Moments of humour about menstruation and comparative body hair is punctured by a chilling score, camera angles that would suggest the world is titled towards chaos, and a couple who are increasingly more concerned with their own safety than the lives of their children.

Cracks form in Steven and Anna's armour as they try to find out what is wrong with their children, then accept that indeed Martin has the power to kill them, and try to find a solution that will keep their lives in check. Farrell excels in this kind of character role (and it is a character far more than a leading man); Kidman acquits herself well, but buries her emotions a bit too much to the point of almost being bland.

While the family may speak in an odd and formal manner, the world they inhabit is definitely ours (placing the film closer to Dogtooth than The Lobster); and Martin's desire for revenge (if not his ability to make it so) is understandable. As such, Lanthimos is eschewing the usual extremes of emotion that usually accompany horror films with similar scenarios. Keoghan is the perfect teenage villain: he speaks as a teenage boy would, seeing his role and actions as matter-of-fact and natural, and he toys with teenage girl Kim as a teenage boy would, to the point where she offers to sacrifice herself to save her family, but also as a perverse declaration of love.

Review originally published during the Cannes Film Festival in May 2017. The film will open in select U.S. theaters on Friday, October 20 via A24 Films.

Do you feel this content is inappropriate or infringes upon your rights? Click here to report it, or see our DMCA policy.
Alicia SilverstoneColin FarrellIrelandNicole KidmanUKYorgos Lanthimos