Blu-ray Review: THE KILLING OF A SACRED DEER, Another Idiosyncratic Masterpiece from Yorgos Lanthimos 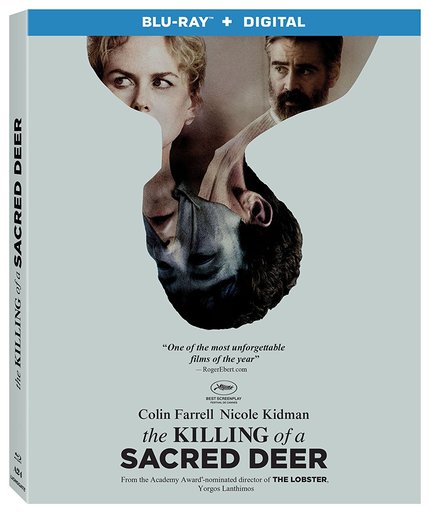 There are very few filmmakers these days whose work is as immediately recognizable as Greek New Wave auteur Yorgos Lanthimos. From the moment he broke out on the international scene eight years ago with his arresting third feature, Dogtooth, Lanthimos has cultivated not only a signature style, but a rabid following - myself included - who await his next assault on what is commonly accepted as "good" cinema with baited breath.

When his debut English language feature, The Lobster, was nominated for an Oscar for best original screenplay, it seemed inevitable that this unique craftsman was on his way to bigger and better things. So, when his follow up, existential horror film The Killing of a Sacred Deer hit cinemas in recent months, fans and foes alike sat eager to judge his latest attempt at upsetting the status quo.

Well, I can say that as a fan of the filmmaker - I reviewed Dogtooth ecstatically upon its home video release 7 years ago on this very site - I can say that I am still delightfully surprised by the layered, and yet willfully obtuse, work that Lanthimos continues to churn out with no regard for commercial viability.

He brings The Lobster lead Colin Farrell back into the mix as a successful surgeon and adds A-list superstar Nicole Kidman and wunderkind Barry Keoghan (Dunkirk) to his ever expanding stable of talent to present a skewed, oddball, tale of terror and supernatural revenge unlike anything you've ever seen.

Our own Dr. Shelagh Rowan-Legg reviewed the film upon its world premiere at the Cannes Film Festival last year and had this to say:

While the family may speak in an odd and formal manner, the world they inhabit is definitely ours (placing the film closer to Dogtooth than The Lobster); and Martin's desire for revenge (if not his ability to make it so) is understandable. As such, Lanthimos is eschewing the usual extremes of emotion that usually accompany horror films with similar scenarios. Keoghan is the perfect teenage villain: he speaks as a teenage boy would, seeing his role and actions as matter-of-fact and natural, and he toys with teenage girl Kim as a teenage boy would, to the point where she offers to sacrifice herself to save her family, but also as a perverse declaration of love.

Shelagh's response is certainly more measured and less emotionally effusive than my own, but reasonable nonetheless. The Killing of a Sacred Deer is nothing less than the work of one of the last auteurs able to create unique works of art on his own terms with a budget that can sustain the kind of quality he demands. The nearest parallels I can draw are the work of Wes Anderson and filmmakers of yore like the great Russ Meyer, in that Lanthimos' work is immediately recognizable within seconds of the film starting to roll. Is that an empirically good thing? That's not for me to decide, but I am a fan.

The Killing of a Sacred Deer is not for everyone, that much is certain. The dialogue and delivery is distinctively stylized, to a degree that will likely alienate a huge swath of any potential audience. Lines are delivered in a abnormally sterile manner, almost completely devoid of inflection, however, this odd choice somehow allows the players and the story to divorce themselves from the constraints of "performance" and allows the plot to unfold on its own. It's an unusual tactic, and one that would fail miserably in the hands of lesser talent, but Lanthimos pulls it off, making this film one of my favorite experiences of 2017.

Lionsgate's Blu-ray release of A24's film is spotless. The film was shot on 35mm and transferred in a 2K digital intermediate for theatrical viewing, and I presume that the DI was the source for this exceptional disc. Colors are vibrant when needed, shadow detail is wonderful, and fine detail looks beautiful throughout the film, especially in the many outdoor, natural light sequences. The DTS-HD MA 5.1 audio track is wonderful, with clearly delineated dialogue and what minimal effects there are presented effectively.

The only supplemental material on this disc is an EPK style behind-the-scenes featurette called "An Impossible Conundrum", which interviews all of the major players - director, producers, and leading actors - and gets their opinions on working on the film and what an unusual process it is to work with Lanthimos. Several performers talk about essentially un-learning how to act in order to fit Lanthimos' desired effect, and it's apparent that his direction is key to the film working as well as it does.

The Killing of a Sacred Deer is definitely not for everyone, but if you're looking for something unique, you've come to the right place.

Do you feel this content is inappropriate or infringes upon your rights? Click here to report it, or see our DMCA policy.
a24barry keoghancolin farrellnicole kidmanyorgos lanthimos