Locarno 2017 Review: DAMNED SUMMER, Shoestring-Budget Filmmaking at Its Most Earnest 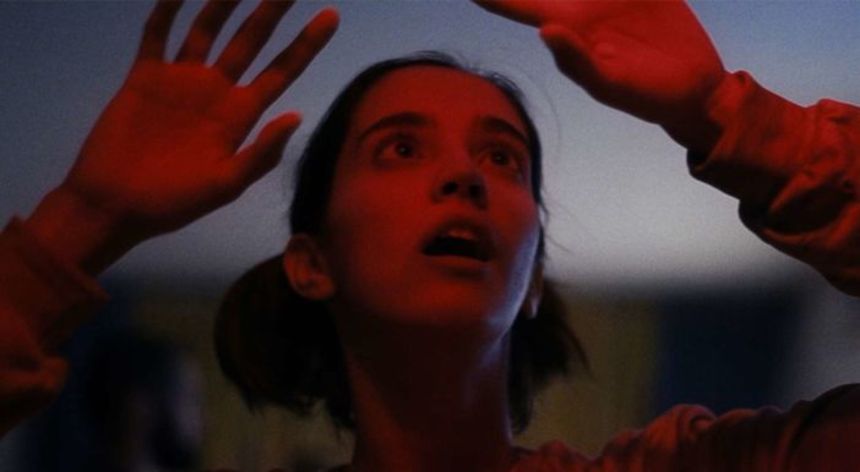 Following young emerging filmmakers carries a certain charm, especially in the cases where a filmmaker decides to go against convention. First feature outings such as Juan Daniel F. Molero´s Videophilia (read our review) or Emiliano Rocha Minter´s We Are the Flesh (read our review) are possessed of this fine quality.

Debuting Portuguese filmmaker Pedro Cabeleira, born in the early 90s, also belongs in this band of young hopefuls with his recently finished first feature Damned Summer. It's a labor of love and passion, not only Cabeleira, his friends and acquaintances, but also the 150 actors who are taking turns in front of the camera.

The film kicks-off without a need to foreshadow or imply any kind of premise, simply and directly, following the protagonist of the next two hours, a twenty-three years old Chico. He slacks around his mother´s house and the hand-cam captures what seems to be free, spontaneous and unscripted interaction between characters, a default setting ticking almost each box on a documentary checklist. Cabeleira preserves the veneer of naturalism, however, the aura of authenticity, the documentary-feel, wears off in intimate encounters the characters interact within despite improvisation and loose scriptwriting.

However, the first impression of spontaneity and somehow unscripted, freestyle, plotting continues to persist as the leading attributes in what could be described as a minuscule millennial film-fleuve. The writer-director captures a carefree summer of fresh graduates that should be already embracing the responsibilities of adult life though are more than happily avoiding them, arrested development putting maturity on hold during supposedly the last carefree summer. Cabeleira steps aside from the common path coming-of-age films despite Damned Summer being a latent coming-of-age in favor of plunging into the “lost generation” topic of contemporary European countries struck by severe austerity measures as in Portugal or Greece (Sofia Exarchou´s Park is a particularly vivid depiction of that hopelessness).

Miguel Gomes´s trilogy Arabian Nights (read our review) is a particularly political portrayal of that struggle, Cabeleira marches the other way following a group of unproductive individuals in a productive age drifting in Lisbon. Similarly to the Exarchou´s effort, Damned Summer is a collective portrait, a generational testimony with Chico serving as the main conduit and the centerpiece of the portrayal of peers lacking prospects and expectations in the same degree. Laterally to Exarchou´s Park, Cabeleira offers a first-person account of youthful aimlessness and idleness, an expressive psycho-social exploration undercut with implicit political and economic factors stirring the youth.

The freewheeling and impromptu style set up in the opening minutes defines the plotting built on a vacuous narration seemingly structure-less drifting of the protagonist literally mirrored in the flux of situations. Cabeleira utilizes a loop pattern, cycles of daytime lethargy and brimming nocturnal euphoria making the film´s inner rhythm more important than the plot hierarchy. Although the passing from day to night and night to day constitutes Damned Summer´s de facto plot architecture, the film´s pulse is designed upon Chico´s emotional sinusoid, his rapturous and instant fallings in love and sudden heart-breaks dictating the film´s beat.

However, what Chico and his companions lack in prospects and expectations are generously overcompensating in Epicureanism, a temporary Band-Aid on bleak outlooks for a fulfilling life and the trademark of free-spirited lifestyle in the moment savoring the intoxicating instances to the fullest. Nightly Bacchanals offer transformative and transcendental experience under the blaring of loudspeakers and with MDMA and THC simmering into the bloodstream. Hedonism brushes shoulders with psychedelia and they both become a part of the generational portrait Chico, as a serial stoner and Romeo, is the delegate of.

Preserving aesthetic trend-setting tone of the opening scene, Cabeleira does not betray the visual homogeneity even during characters´ tripping. Over-stylization and stoner´s hijinks do not have a place in the director´s vision of psychedelia and he never uses one single extra-diegetic effect to simulate psychedelic distortion of reality (no LSD is involved in partying). On the other hand, Cabeleira adapts the effects of cannabis and MDMA into the editing and sound design to facilitate the drug´s influence on the perception of the characters not excluding bliss and upset as highs and lows of Chico´s mental roller-coaster. Cabeleira spins the usual stoner film into a bona fide attempt of faithfully replicating the tripping experience and sensation going against the stereotype of giggling hilariousness.

Damned Summer is yet another docu-fiction hybrid being fiction film in story and documentary in the form. Besides invoking naturalism even during the kaleidoscope of lighting color smudges when the party gets going, long improvisation sessions and lenient scriptwriting, small production crew, Cabeleira revealed he was tailoring the characters to best fit the actors in order for actors to be “as much comfortable in their roles as possible”. He added: “They are exercising the work of professional and non-professional actors at the same time”.

As an emerging filmmaker, Pedro Cabeleira sidestepped the punk aesthetics (Videophilia) and no-holds-barred approach to a story (We Are the Flesh) in favor of, in this regard, a smooth story of a lost generation trapped in a cycle of hedonism, psychedelia and no prospects and its honest portrayal reinforced by employed documentary methods. Damned Summer is a shoestring-budget filmmaking at its earnest when even a shoestring-budget is still an overstatement given the circumstances of the film´s origin and genesis.