Rotterdam 2015 Review: VIDEOPHILIA (AND OTHER VIRAL SYNDROMES) Lust and Loathing in Viral Lima 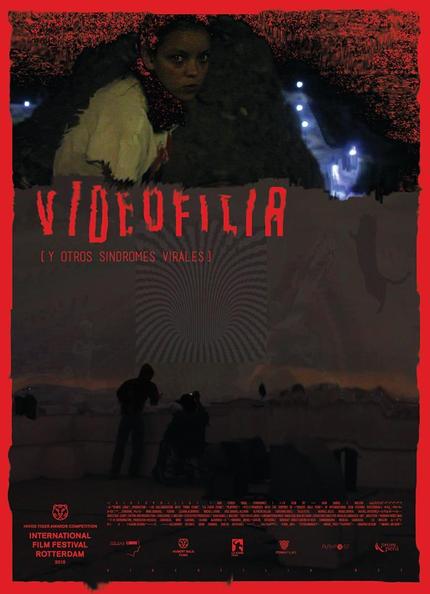 The emerging director Juan Daniel F. Molero premiered his second film Videophilia (And Other Viral Syndromes) in the shrine of progressive audiovisual endeavours: Rotterdam. This rising star -- and somewhat young renaissance man -- is currently fiercely multitasking as director, film critic, programmer, documentarian, producer and distributor, or maybe he is just a damn hard worker. The Peruvian 27-year-old director debuted in 2010 with the challenging docu-fiction Reminiscences (screened also at MoMa), about an amnesiac trying to reconstruct his identity through his homemade and cellphone videos. And the peculiarities of the digital age and film in the era of the mechanical reproduction and fabrication also constitute the centerfold of his sophomore feature.

After the psychedelicTwilight Zone 2.0 opening sequence, the film starts to unfold in the realistic mode of docu-fiction, conjuring an authenticity spell by using guerilla handicam, un-stylized camera angles and, in the positive sense, employing general DYI aesthetics. Molero confessed that the film was done on a shoestring budget, but that the overall low-fi design was not just a virtue of necessity. In times when cellphone cameras viciously replicate the present time, to inundate whatever free byte there is in the clouds of social networks, the mimicking of those floating simulacrums becomes a legit aesthetic choice. And in Molero´s case they even gravitate towards a video-art configuration.

This unpolished formalism doesn´t contrast with the postmodern story of the hypermodern age, as the director wildly mixes several genres, kicking off with the boy-meets-girl template. She and he meet on a video chat, unequivocally specialized in peeping at others during self-intimate sessions (in consensual agreement). Quite shockingly, they also meet in the real world, to consummate the virtual bond. Both of them represent the generation brought up by black mirrors (to reference Charlie Brooker´s eloquent satire), living in a constant vortex of raging information in the ever-present Internet ether. The central figures also share the same lack of responsibility and overall aim in the life, mostly slacking away, rather than meaningfully navigating the murky waters of life.

The constant influx of observational snippets flowing into the decentralised narrative is yet another symptomatic stroke to the digital portrait. The envelope of formal style is being pushed a step further by introducing a cyber plane. Viral syndromes infiltrate the picture, and the mode of realism is being infested by ruthless digital memes, gif pictures, and other miracles from the virtual realm. And the inevitable happens: two completely different worlds collide and implode into one. Invasions of digital pictograms don´t necessarily feel alienating, though at times they're maybe being a bit of a nuisance. Molero mimics the raw reality, only to contaminate it with digital smog, as a remainder of umbilical cord imperturbably bridging both worlds, with the digital one explicitly interfering into the real one.

This experimentation with formats demonstrates Molero´s video-art sensibilities, which he doesn´t hesitate to put on full display. As avant-garde filmmakers used to directly manipulate the film stock by applying various emulsions (or even damaging it), Videophilia´s director also keeps direct contact with his digital matter. He applies various smudges and picture distortions, to vividly emulate low streaming bandwidth as just another zeitgeist invocation. The variegated and amorphous smears initiate more awkward feelings, yet deepen the whole concept of cyber aesthetics, as they become an integral part of the film´s texture. Occasionally, the image distortions coincide with internal sensations of characters, as in the case of a bad drug trip. To smear the pictures was a master stroke, to palpably evince how volatile and deceitful digital (reproduced) reality is. And, moreover, how compromised it is by such shameless manipulation.

Videophilia´s (And Other Viral Syndromes) eclecticism binds and couples together several layers, starting as a generational probe on Lima´s youth, captured in cycles of instantaneous pleasure seeking, no matter whether it´s lust or just getting some easy money. Their confusion derives from a collision of "the authentic" and "the fabricated", and they are incompetent to distinguish one from another in the oppressive counter-enlightenment they're in, ruling with iron fists of seductiveness and corruption. The struggle of "authentic" and "fabricated" translates also into a chronicle, mapping the plague of internet madness spilling into domestic vernacular culture (the film was shot on location with no permission thus enabling a peek into odd corners of Lima). It does this by juxtaposing a spell from eviscerated rat and musings on Mayan prophecies in the same space-time continuum, and journaling the coming to terms to a completely new culture, as the horizons of internet valley speedily expand. This geo-culturally anchored genre-bender echoes multi-hyphenate Khavn de la Cruz´s digital Filipino crusades, packing wide array of ideas into one voluminous bag of tricks. From this experimental nature, Videophilia is also a visual essay on cyber-apocalyptic times. It fully embraces the hollow visual emblems of the Internet age, and nests them into the flesh of digital film, in an indictment of the prevailing visual culture, which relays on mediated images as the main vehicles of experience and connection with the outside world.

Molero delivers a significant addition to his oeuvre, not only in substance, but bearing equally important value in the form as well, and the achievement of this perfect balance propels the effort to another level. Videophilia blurs many boundaries, and merges all aspects into a seamless, raving, tragicomic and idiosyncratic gonzo cavalry. As a result of multiple picture imperfections, the experience is rather unfit for the big screen, albeit in the spirit of Videophilia the film ought to be watched on computers, tablets and smartphones (hopefully with real low streaming bandwidth messing up) to enhance the viewing experience. Most likely, the film will repeat its predecessor´s trajectory, ending up in MoMa sooner or later.

And it needs to be mentioned that the young Peruvian director took home one of three feline-headed statuettes, the Hivos Tiger Awards from the main competition, as a token of his uncompromising effort.

Do you feel this content is inappropriate or infringes upon your rights? Click here to report it, or see our DMCA policy.
Juan Daniel F. MoleroPeruRotterdamVideophilia (And Other Viral Syndromes)Liliana AlbornozCaterina Gueli RojoRafael GutiérrezMichel LovónComedyDramaFantasy