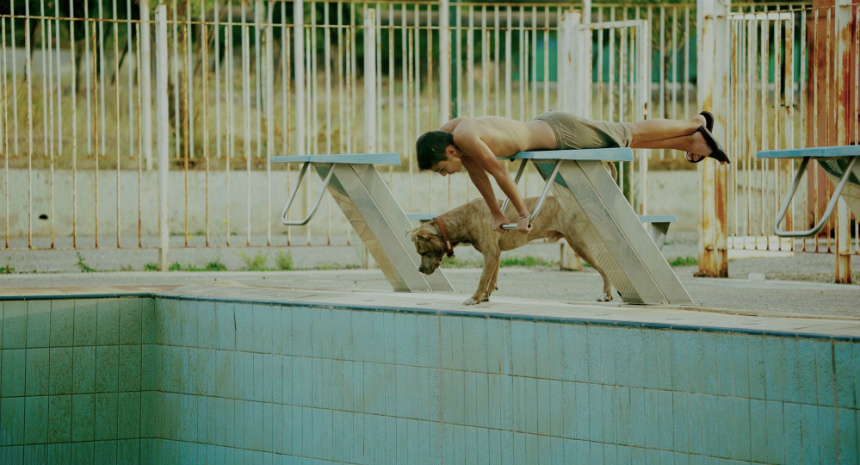 The surge from Greek peninsula seemed to lull recently although there have been some titles flying under the radar. Sofia Exarchou's feature debut Park does not belong among them. In the development since 2012, Park as a work-in-progress netted handful of awards at script and co-production markets taking the top honor at Karlovy Vary last year, the Work in Progress Award for Most Promising Project, subsequently generating high expectations. Since then, the prospects climbed even higher.

The titular Park refers to the Olympic village in Athens, once a stage of great spectacle, now a deteriorating ghost-town, a great concrete memento of the country´s triumph and followed by immediate downfall. The dystopic wasteland of the Olympic village, their dire and hopeless state resembling Chernobyl, is now the home to a local gang of frivolous youth who is spending their highly excessive free time wandering and fooling around in the area mindlessly. Even though the Greek crisis vanished out of news headlines being replaced by shots of immigrant masses, the country´s crisis persists.

Exarchou does not explicitly revoke the detail circumstances of her story stemming from whatever political and economic climate may dominate over Greece. Park remains throughout the whole running time a quintessentially generational affair unrestrained by the country´s borders. The filmmakers in European cinema refurbished to the antiqued albeit not forgotten notion of lost generation. The cycle that started during World War I repeats itself as millennials come of age and the label makes sour comeback as a bitter testament to their plight and mindscape.

Notwhistanding being centered on a community, a specific subculture, the director singled out two protagonists personifying their generation, younger Dimitris full of untamed energy saturated by more than just youth rebellion and older Anna, athlete sidelined by injury. Eventually both gravitates toward each other in a short-lived romance propelled by primal urges. Dimitri employs his profusion of unprocessed energy to ascend to the rank of alpha-male driving him to act savagely while slender Anna turns herself into a trophy, willingly objectifying herself, her gymnastic routine turned into a saloon trick to attract gazes of hormone-raging young adult males.

Exarchou vividly and painfully palpable captures the current young generation´s malaise of aimlessness along bouts of hopelessness. Soon, the stray dogs in the film loose the humiliating caricature contours to metamorphose into a heartbroken emblem of disenfranchised youth robbed of future. Dimitra Vlagopoulou as Anna carries all the weight of her character on her shoulders externalizing Anna´s story and state of mind solely through her own body in an exceptional performance, however the writer-director Exarchou reveals more from the privacy of Dimitris Kitsos´ protagonist - problems in work and at home with alcoholic single mother - hinting on his social background.

The lenser Monika Lenczewska cloaks the film into earthly tones rendering the unruly rawness virtually ever-present. Lenczewska orbits the cluster of colliding bodies with the curiosity of an explorer mapping unknown tribes. Exarchou exchanges verbal language for more primordial language of physicality as the common mean of communication - copulating, partying or competition in physical prowess verging on bullying – trials and rituals. Park has probably closest to Clark and Korine´s oeuvre Kids (although Exarchou follows almost similar trajectory as Papadimitropoulos and Vogel in Wasted Youth, topically not stylistically), being physical in the broader sense yet less sensual, focusing on young generation albeit under different circumstances and with further socio-political context.

Body becomes an important motif, not being fetishized but observed with equally anatomic and philosophic fascination. The configuration of single body or a group of bodies in a space, their mostly anonymous and violent interactions, hierarchy and relation stemming from various forms of contact. Dimitris overcompensates dysfunctional relationship with mother and a loss of job as well as bleak prospects of future in the group power dynamics, awkward relationship, selfish sex and trying to prove to be better person than sojourning tourists, only to encounter the same feeling of alienation again.

The dilapidated Olympic village provides equal parts befitting and meaningful background and framing. Furthermore, Exarchou embeds the plot unmistakably into the domestic setting invoking the stereotype of Greece as touristic destination adding another layer, an insider confronting outsider´s stereotypes. Papadimitropoulos already toyed with the concept in Suntan (read the review)  through mild caricature-shaping subversion. Exarchou heads the opposite route with Lenczewska capturing beaches enveloped in a post-seasonal gloom in rigid realism turning a soulless second-tier resort into a limbo of desperation and estrangement.

Sofia Exarchou´s Park deviates from the notion of Greek New Wave perceived through the works of its frontrunners Yorgos Lanthimos or Athina Rachel Tsangari gravitating towards contemporary European arthouse. Despite the film´s origin, Park is essentially European affair (the film was made in Greek and Polish co-production), a fine example of reverse glocalization, tackling highly actual and profoundly pan-European topic easily transferable even beyond the turf of the Old Continent, speaking through the universal body language encapsulated in bare-bone and raw realism where force becomes currency.

Not entirely the degree of depresso-fare the Eastern European cinema became (in)famous for, Sofia Exarchou consciously eschews the preachy moralization and infuriated finger-pointing in favor of observation mode and borderline social realism. Exarchou elevated the Greek New Wave to the global level while remaining firmly anchored within it.

Do you feel this content is inappropriate or infringes upon your rights? Click here to report it, or see our DMCA policy.
DramaGreeceNew Greek WaveParkPolandSofia ExarchouWarsaw