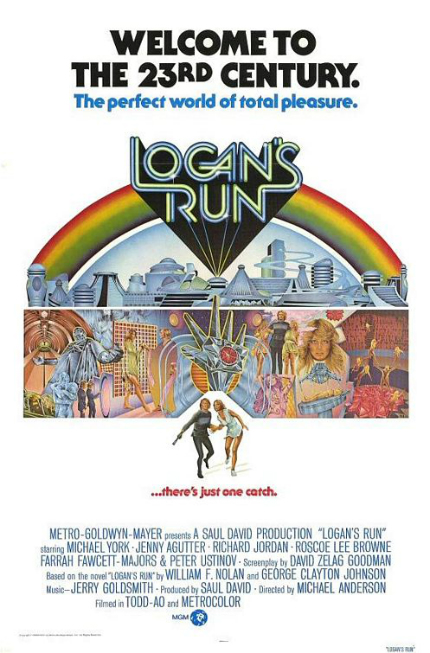 Several years before, I was a founding member of the Science Fiction Book Club. Initially we met to talk about Isaac Asimov, Ray Bradbury and Arthur C. Clarke. Eventually we expanded our discussion to includes movies, and why so few good science fiction movies were being made.

Because we met at the local public library, where we each consumed mass quantities of science fiction, we also discovered that the magazine section included slick publications that covered motion pictures. Somehow we heard about the upcoming adaptation of Logan's Run, and one of our members volunteered to read the novel it was based on and give us a report.

Written by William F. Nolan and George Clayton Johnson, the latter a name familiar to us from his The Twilight Zone teleplays, the novel described a society in which no one lived past 21 years of age. This sounded good to us, and so when the film was released in June 1976, we made plans to see it.

Then we saw Michael York order up a companion for the evening, and Jenny Agutter showed up wearing what looked like a bouncy poncho thing with no sides and no underwear and I was suddenly entranced by the movie.

Later on, after the two had gone on the run and somehow ended up all wet and freezing in a wintry setting, Ms. Agutter took off her clothes to keep from freezing and was revealed, quite briefly, in her naked form. She was even more beautiful in that moment. The sight also nearly struck Michael York dumb, more than 20 years later on the audio commentary for the DVD; he claimed he'd forgotten all about it.

I never did. In that moment, I became a man. Or, I thought I did. The feeling was cemented for me somewhat later in the movie when the two leads went skinny dipping. It was, after all, the 1970s, and young people of my age and social standing did not know much, if anything, about the anatomy of the opposite sex beyond the stick figures they showed us in biology class.

Because of my naive adolescence, Logan's Run was a landmark movie for me. As time passed, and I saw the movie on television (edited) and on videocassette (unedited but lower resolution) several times, I was reminded constantly of things I liked and didn't like about it.

But it took a recent viewing of the film on Blu-ray to come to grips with my long-ago disappointments about the story and the performances. My initial impression was that York was too soft and that Richard Jordan, who plays Francis, was too hard; I didn't think that either was believable in their roles. (Ms. Agutter, of course, was perfect.)

While it's true that both York and Jordan were too old for their roles, chronologically, now I realize they were both well-suited for their characters. York is high-minded and thoughtful; he carries himself with confidence, but is not so arrogant that he's unwilling to change when presented with sufficient evidence. Jordan is arrogant and a true believer, yet he's also genuinely concerned for his friend; still, that's not about to stop him from carrying out his deadly mission, even when presented with sufficient evidence to the contrary.

As for Ms. Agutter, she remains perfect, now and forever, and I will fight anyone who says different. Placing things into a fair context, however, means acknowledging that she was a child performer who grew into a fine actress. Her character, Jessica, is measured but hopeful and decisive. She makes a snap judgment about Logan based on her reading of his character, which is only convincing because of Ms. Agutter's performance. Ignoring my fond nostalgia, it must also be admitted that Jessica fits too easily into a 'damsel in distress' role; she's often passive, waiting for Logan to save her.

The film won an Academy Award for its visual effects, oddly enough. Frankly, the special effects did not look that special during the original theatrical run in the Cinerama Dome, and they do not hold up well today. Stanley Kubrick raised the bar with 2001: A Space Odyssey in 1968, and few, if any films, were able to match that standard for years afterward.

The audio commentary for the DVD, which has been ported over onto Blu-ray, features York, director Michael Anderson, and costume designer Bill Thomas. It's well worth a listen. Anderson explains what attracted him to the script and fills in many production details. York is also quite detailed in his appreciation of Anderson and his fellow actors.

Anderson, whose directing career stretched back to 1949, continue helming films and television shows until 1999. York and Agutter remain active and vital performers. Jordan died from a brain tumor in 1993, aged 56. Farrah Fawcett, who plays a small role, would become a giant TV star after Charlie's Angels debuted later that year.

A television adaptation, first broadcast in 1977 and starring Gregory Harrison and Heather Menzies, ran for 14 episodes before being cancelled.

Nearly twenty years later, I visited the Fort Worth Water Gardens, where key scenes in the third act were filmed, and felt like my mind would explode because the real-life setting is in urban Texas, surrounded by cityscape, and not by the edge of a vast sea. In 2006, another key setting for the movie in Dallas was demolished, as documented in photos by Ain't It Cool News.

70s Rewind is a feature that allows the writer to relive his past through his favorite film decade.

Do you feel this content is inappropriate or infringes upon your rights? Click here to report it, or see our DMCA policy.
70s RewindJenny AgutterMichael AndersonMichael YorkRichard Jordan