Destroy All Monsters: The Meme-ification of ROGUE ONE 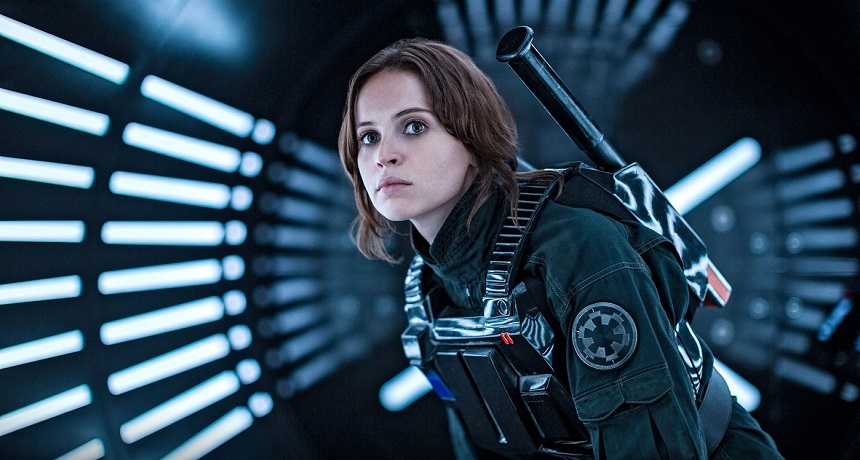 I'm consistently fascinated by how pop cultural mega-properties take hold in the discourse of the group they are ostensibly created for, the fans. There's an interesting cycle created here.

As the internet's "official" criticism gets more and more wrapped up in hot takes and first-to-publish reviews, the meme-ification of pop culture - by which new movies, TV shows, comics, and whatever else get stripped down to their components and waved like flags above people who identify with those particular components - takes longer, and bears richer outcomes.

This meme-ification serves as a kind of corrective, as people sit with something they've enjoyed and creatively express what it meant to them, removed from any obligation to describe in "objective" prose whether a movie deserves 3 stars or 4, or has a bad first act but a good third. It's like watching fandom, itself, reproduce. It's how movies like Mad Max: Fury Road or Rogue One: A Star Wars Story become more than the sum of their parts - in fact escaping the value of their parts altogether. They cease to be films at all, and become pop art.

Take Rogue One as an example. The film certainly received a grand portion of overarching critical praise - it currently sits at 85% on Rotten Tomatoes - and some of the writers more beloved of the film described it as being equal to The Empire Strikes Back. Those people are wrong and crazy, but certainly demonstrate their enthusiasm - possibly reaching through hyperbole to a gut-level means of expressing their actual "well, I just had a really good time" response.

As a piece of filmmaking, Rogue One has some fairly evident problems. The largest of these is its trouble getting started. The first half of the movie or so is muddy in its intentions and choppy in its storytelling, and does an exceptionally poor job, particularly, of setting up its principal character (Felicity Jones' Jyn Erso) as a protagonist with a clear characteristics, goals, and flaws.

On what is, again, more of a gut level, it's difficult to fall in love with Jyn the first time you watch Rogue One... but the internet did anyway. Or perhaps more accurately, the alchemy of elements - a year's worth of anticipation stoked by excitement about The Force Awakens, alongside Rogue One's own excellent, cutting-room-floor-based trailers, plus the late addition of actually watching the film once, twice, or five times [cough] - leads to an enhanced sense of affection for Jyn.

I didn't find Jyn particularly compelling the first time I watched Rogue One, but I adore her now. She'll never be Rey or Luke to me, but she'll have her action figure on the shelf next to those two regardless. I'm glad she exists, super glad children get to have her as an icon, and pretty depressed we aren't going to see her in any more movies.

A big part of this conversion - and it happened with Diego Luna's Cassian Andor too, and Riz Ahmed's Bodhi Rook, another two characters horribly served by the actual film itself - was in watching how fans on the internet reacted to Jyn, and to Rogue One. In a movie as teeming with minute detail as a Star Wars film, it's pretty easy for every single Star Wars-enthused person to find the one or two things about the movie that tickle their fancy beyond any rational explanation (I myself went down a Bor Gullet rathole from which I have not fully emerged). Naturally, the lion's share of this fancy-tickling centers around the central characters, who are there for exactly that purpose: to serve as our avatars in the Star Wars world and, eventually, the icons that we take away with us afterwards.

It's not difficult for, say, Chirrut Imwe and Baze Malbus to become iconic. They're probably the two best established (human) characters in the film, and they basically steal it. Naturally, the fandom fell immediately in love with them, instantaneously proclaiming Chirrut and Baze to be Star Wars' first gay couple. (I'm also fond of my friend Matthew Price's reading, which is that, being monks, they're actually Star Wars' first ace couple. Nice!)

The characters that Rogue One itself does a lesser job of fleshing out, though - Jyn, Cassian, Bodhi, Krennic, and crazy ol' Saw - become twin opportunities for fans. First: the sparsity of prescribed detail is an invitation to dig into that detail more intently, and to contemplate, for example, Bodhi's relationship with Galen Erso - mentioned in the film, in only a handful of lines - and conjure a mental picture of how that mentorship might have unfolded.

Second, the sparsity of prescribed detail also obviously means: you can make a bunch of headcanons and ships up, and just go with it, because nothing in the text itself contradicts you. Like mirror reflections in Tarkovsky's Solaris, there is something intensely attractive about an empty vessel. If we want to imagine that Bodhi Rook is immensely fond of kites, there's no reason to think otherwise.

What this all comes to mean, for me, is that it's becoming less and less interesting to read the first-responders' takes on whatever the next big movie is, and more and more interesting in watching which elements of that movie become the standard-bearers for which groups of people, and how they interpret those elements. (I can't help but recall with a chuckle how disappointed the American alt-right were, last month, when they found out that they're repped in the Star Wars universe by the Nazis.)

This meme-ification in general leads to richer reads on the touchstones of these major pieces of pop cultural entertainment - which, me being me, is the most intriguing part of the process. And it's not just the new stuff: the best Star Wars related piece I've encountered this month was about whether shamefacedness about basic obstetric care may have lead to the fall of the Republic in Revenge of the Sith, and that movie came out 12 years ago.

Perhaps part of the problem with traditional movie reviews around something like a Star Wars film is one of speed, in two parts. I've already mentioned how quickly these hot takes need to materialize on the internet, often omitting context altogether in favour of simple, single-view reactions.

But the other problem of speed is one that is endemic to Star Wars (and a lot of other blockbusters besides): these movies move fast. And no, on first watch, you're not going to get a lot out of Saw Gerrera or Bodhi Rook, being as that they're onscreen for what is probably a grand total of twenty minutes (combined), in a two hour, fifteen minute movie that hurtles through the cosmos so quickly that it has introduced location title cards to the Star Wars frame. (Ugh.)

From the beginning, our love of Star Wars was built as much on its rewatchability as its watchability; there's a reason we all burned through our VHS copies back in the 1980s, and can name all of the extras in the cantina. We went back, we parsed out. We developed the infrastructure to see those minute details more clearly, and freighted them with meaning that the films, themselves, could only hint at.

This is how pop culture is made. It's a pleasure to watch it happen in real time.

Do you feel this content is inappropriate or infringes upon your rights? Click here to report it, or see our DMCA policy.
Felicity JonesGareth EdwardsRogue OneStar Wars