Overlook 2017 Awards Wrap: HOUNDS OF LOVE Wins Big; As Did All Attendees

The inaugural edition of the Overlook Film Festival has closed up shop and as we mentioned previously, it was an enormous success. From the beautiful historic setting and packed lineup to the amazing immersive events and all the great friends, everyone who was lucky enough to attend will forever fondly ask, "Remember the first Overlook?"

Bottleneck Immersive's festival-long immersive game held a particularly strong grip on the necks of quite a few devoted players (okay, yes, me too). The expansive narrative stretched back to the Stanley Film Fest and has laid the groundwork for the game at future fests. We still may not know exactly how the horse books, dinosaur drawings, and "vagina" relate to the raising of an anime-inspired she-devil, but surely the equally sinsiter DEDI and Sanity October organizations will keep the multiple trips up and down the mountain between the Timberline Lodge and Govy worthwhile with puzzles and head scratching narrative twists galore.

Aside from that game, the festival also included numerous amazing events including the haunting live 1-on-1 theatrical experience The Chalet by Annie Lesser. There was also the popular Dead Rights Horror Trivia hosted in style by Sam Zimmerman and Ryan Turek in which one category asked of multiple horror movie villains, "Was their iconic sweater a crew neck, V-neck, or cardigan?" Glass Eye Pix was back with their live radio play Tales from Beyond the Pale. And Dark Corner Studios shuttled people in and out of their VR coffin experience Mule to the delight of pretty much anyone who wanted to give it a go.

Oh and the movies! There were plenty of great options for those who were able to tear themselves away from the live events and drinking with friends in front of the fireplace(s). While the surprise closing nighter It Comes at Night was the recipient of the most buzz, Blumhouse's opener Stephanie, Lady Macbeth by William Oldroyd, Rodney Ascher's Primal Screen, the special screening of Laika's ParaNorman, and the "Scariest Feature" jury-prize-winning Still/Born all had people talking as well. But the big winner of the weekend was Ben Young's Aussie horror Hounds of Love which took home both the top jury prize "Best Feature" and the Audience Award. We've got the full press release of the announcement for you below.

Thanks to all the good folks the made Overlook a reality and we definitely hope to see you all there next year! 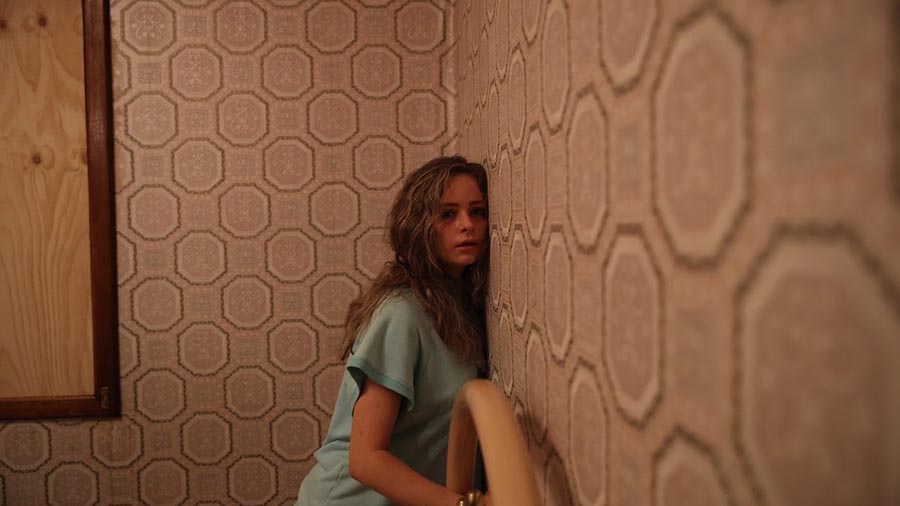 (PORTLAND, OR) – As its inaugural run comes to a close, the Overlook Film Festival has the great pleasure of announcing its first year juried and audience awards. Culled from a stellar lineup of 39 films (22 features and 17 short films from 16 countries), the festival's features and short film juries deliberated over the course of the event, publicly revealing the winning selections at the special closing night secret screening of A24's IT COMES AT NIGHT.

The features jury consisted of Eric Kohn (Indiewire), Alicia Malone (Fandango), and Sam Zimmerman (Shudder). The jurors chose to honor director Ben Young's HOUNDS OF LOVE as the Best Feature at the festival stating, “HOUNDS OF LOVE blew us away with its brilliant combination of gripping horror conventions and kitchen sink realism. Rich with tense performances and complex insight into working class struggles, it's all the more impressive because it's a first feature. We're going to be talking about the movie – and this filmmaker – for a long time.”

Additionally, the jurors highlighted Brandon Christensen's STILL/BORN, giving it the festival's Scariest Feature Award. They noted that, “STILL/BORN freaked us all out in the best way possible. As a worthy entry in the classic sub genre of pregnancy horror stretching back to ROSEMARY'S BABY, it combines visceral chills and a creepy atmosphere into a perfectly terrifying package.”

“Out of a very strong programming lineup, the 2017 Overlook Film Festival shorts jury found it no easy task to choose a best of the fest. But ultimately, we were in agreement about two films in particular. We're thrilled to award Robin Comisar's singular and extremely effective GREAT CHOICE the prize of best short film, with an honorable mention going to Remi Weekes' THE TICKLE MONSTER for scariest short.”

The Overlook Film Festival's audience chose HOUNDS OF LOVE as the recipient of this year's Audience Award for Best Feature. Among the short films programmed at the festival, the audience overwhelmingly voted for Damien LeVeck's THE CLEANSING HOUR as the Best Short Film.

A major festival highlight included the announcement by Jason Blum and Akiva Goldsman, during the presentation of the festival's Visionary Award to Blumhouse Productions on Opening Night, that Blumhouse and Goldsman would collaborate next on a re-envisioned take on Stephen King's FIRESTARTER, one that would “go back to the novel” for inspiration.

Do you feel this content is inappropriate or infringes upon your rights? Click here to report it, or see our DMCA policy.
HorrorImmersive GamingOverlookOverlook 2017Overlook Film Festival