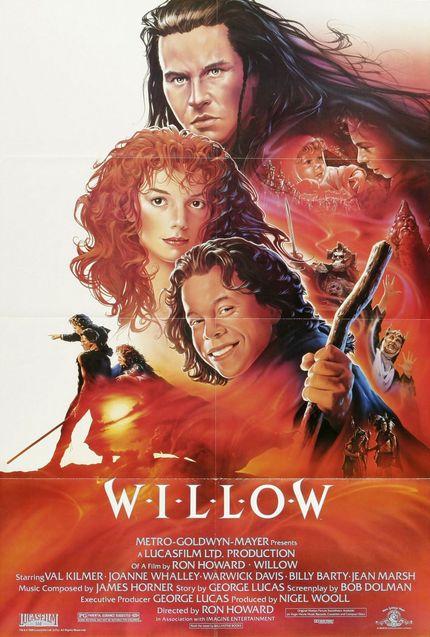 Most people are familiar with the famous trilogies of George Lucas: The Star Wars trilogy. The other Star Wars trilogy. The Indiana Jones trilogy. (Which of course grew into a quadrilogy, whether we like it or not.) But another trilogy may not spring to mind quite so quickly. Lucas' trilogy of '80's flops: Tucker: The Man and his Dream (1988), Howard the Duck (1986), and of course Willow (1988).

All three of these films, to varying degrees, have gotten a bad wrap. Even the notorious Howard the Duck is not without a few odd, fleeting charms. The best of the lot, however, is without question, the action-fantasy cornucopia that is Willow.

An early high-end directorial effort from Ron Howard (coming off of the well-received Cocoon), Willow is a successfully built as a major fantasy action-adventure that families and fandom alike can enjoy. The movie is, certainly by 1988 standards, the whole package: groundbreaking visual effects, a sweepingly immersive scope, not-bad humor, and fantastic creatures and action. It's all cooked up in a satisfyingly mythic stew spanning every portion of the Joseph Campbell section of the storytelling menu.

Boldly bestowing it's lead and title role to the capably talented but still-young (only seventeen at the time of filming!) one-time Ewok Warwick Davis, Willow did its part to advance the prominence of the shorter set in cinema, a regularly engaged cause for Lucas. Indeed, the character Willow is a midget who lives in a quaint village hovel adorned with round doorways. He is one of many such humble residents, caring for his family, albeit with dreams of perfecting his carny-huckster magic act to the level "Great Wizard". Not much happens in his neck of the woods, and that's just the way everyone likes it, thank you very much. 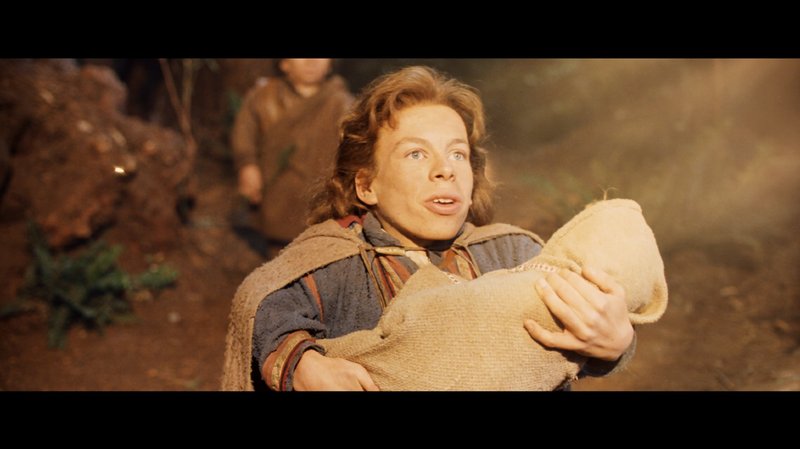 If it all sounds a little painfully familiar, welcome to the fellowship. In my case, having been only marginally familiar with Tolkien's Middle Earth tales at the time the film opened, the various accusations of creative plagiarism on behalf of Lucas and company was something easily dismissed. After all, it's not like anyone will ever make The Lord of the Rings or The Hobbit into full blown live action movies, right?? Looking at Willow today through the post-Peter Jackson filter, the aesthetic, the world-building and even storyline similarities that may've previously been been more out of the way are now unavoidably glaring.

But not truly being a LotR fan, I can only care so much. And since when does one let a little thing like appropriation get in the way of enjoying a George Lucas production? I refuse to let such a thing be a deal breaker in my enjoyment of Willow, a movie that Howard and Lucas managed to nicely cook up despite their clear influences. Somehow, Willow feels very much it's own thing - at least 'twas the case for this kid of 14 back in the early summer of '88.

I was just coming out of junior high school, an uneasy time, as is the case for most any junior high kid. My life's passion up to that point, Star Wars, was essentially a broken-off cultural ice flow, adrift into the mists of Cinema Past. My beloved franchise was dying; in retrospect, it was at that point as dead as it would ever be. But in those final months of eight grade, I saw it: "Star Wars: The First Ten Years" emblazoned on the t-shirt of a fellow student. !!!! What, WHAT, did that mean?? Were the rumors of prequel episodes true?? Could it be... Star Wars still had a pulse?? A new hope, indeed!

As it turned out, that particular shirt, purchased at Disney World, was probably more about promoting the upcoming Star Tours attraction. Makes sense, considering that that student got the shirt there. But alas, no new movies being planned.

Except Willow. Willow, I decided somewhere in my mind, would make a good Star Wars surrogate. It's basically a fantasy/sorcery Star Wars, anyhow, with a bit of the Bible thrown in. It even has a pair of lighthearted tagalongs, ala C-3PO and R2-D2 in the form of the truly pint-sized French inflected brownies, played by Kevin Pollak and Rick Overton. Funny guys.

Before the movie even opened, I bought the fan magazines, and a few of the lousy toys that came out. The fantasy genre was never quite my thing, but I would still follow George Lucas anywhere (even after Howard the Duck).

Surprises in Willow may be few, as anyone who's dipped their toe into popular western culture post-1950 could attest. Even the names of the characters tell you most everything you need to know about them: the bighearted lead Willow Ufgood. The eeeeevil Queen Bavmorda (Jean Marsh). The butt-kicking warrior woman Sorcha (Joanne Whalley). The reluctant sidekick Meegosh (David Steinberg), the boisterous village naysayer Burglekutt (Mark Northover). And of course the rascally swashbuckler Madmartigan (a film-stealing Val Kilmer). But it scarcely matters, as director Howard expertly balances all of the elements, signaling the effective crowdpleasers of his sometimes bumpy career (Backdraft, Apollo 13, Ransom). 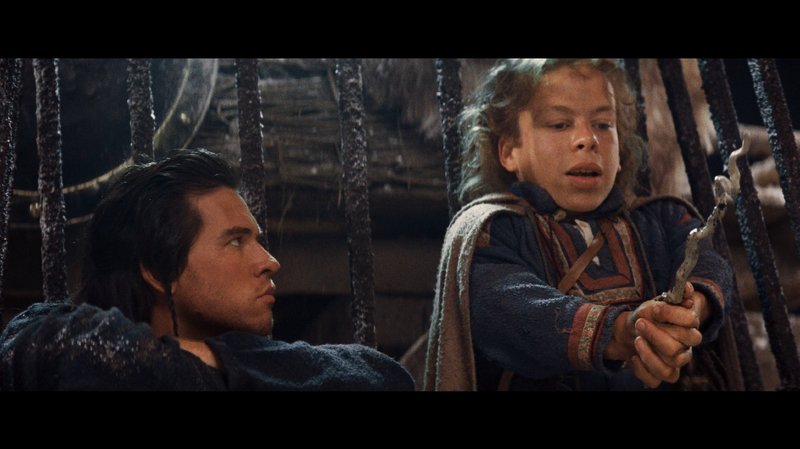 As it turned out, Willow is the film that ethereally vanished into the mists, with Star Wars of course returning, more powerful than we could possibly imagine. Years went by with the film backburnered in my own memory. My Joanne Whalley/Sorcha poster came down circa 1990. I bought the DVD many years ago, watched it then, and then more or less forgot about it again.

That is, until very recently when I found it in my movie cabinet, and realized that all four of my young kids might just dig this movie. Indeed, they did - at ages 11, 8, 6 and even 3, they all found very different things to strongly favor about it, ranging from its advent of morphing effects to the utter cuteness of the little baby on whom the whole plot hinges.

Even I, having turned pro film critic years ago, am easily able to forgive the film’s passive aggressive jabs at several of the titans of my field, the frighteningly skull-adorned General Kael being a knock on Pauline Kael, and the film’s phallically odd two-headed dragon called Eborsisk (not named in the film, but in the film's marketing) going after Siskel & Ebert.

Perhaps it was the stuff of fantasy to ever think that a mythic sword & sorcery epic could be a box office hit and capture the imaginations of fans far and away. Breaking the poor box office curse of the fantasy genre would fall to Peter Jackson, not George Lucas or Ron Howard. Willow, in any age, though, doesn't deserve to be forgotten.

Do you feel this content is inappropriate or infringes upon your rights? Click here to report it, or see our DMCA policy.
fantasy adventureGeorge LucasRon HowardVal KilmerWarwick DavisWillow