Review: GUARDIANS OF THE GALAXY Vol. 2 Goes For Emotional Beats

When Marvel created their plan for a cinematic universe, they had to take the risk of making several stand-alone films which, by themselves, didn't have all that much of a business case. We're talking about Captain America: The First Avenger and Thor, two titles which had the job to not suck and provide the groundwork for the super-crossover which was the first Avengers movie. And it worked.

Some time later, they had to create an even riskier addition to their universe with Guardians of the Galaxy, a little-known title in Marvel's comic archives. I can still remember the discussions in the comments here at Screen Anarchy that year, on how hard it world tank at the box-office. And it didn't. In fact, it was a fun film, it became one of Marvel's greatest success stories, and paved the way towards more diverse and stranger territories for the MCU to play around in. 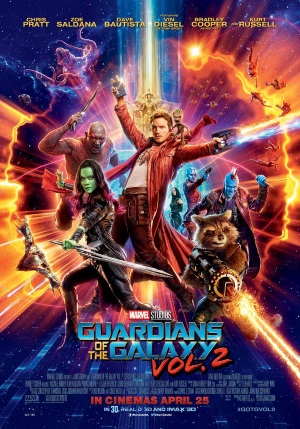 Flash forward to now, and the sequel to that very successful first film. We find the Guardians some time after we left them: Peter "Star Lord" Quill is still in Gamora's friendzone, Groot is still a baby, and the mercenary group has gained itself a halfway decent reputation by saving the galaxy during the previous film. They're still pretty much "a bunch of a-holes" though, so they manage to piss off a big client and have to run for their lives.

But then a mysterious God-like stranger named Ego, played by an impressively dashing Kurt Russell, saves them from their nasty predicament. He claims to be Peter's father, and takes the Guardians to a utopian planet to prove it. Peter is distrustful yet delighted, especially when he himself starts to exhibit God-like powers. Will Quill end up choosing his new natural family over his chosen one? And is there - maybe - a catch?

If, by now, you'd think this would actually be a Star Trek kind of synopsis, you would not be mistaken. Stephen King once summed up most of Trek creator Gene Roddenberry's plots as "The crew encounter God in space, and he is insane, a child, or both". Guardians of the Galaxy Vol. 2 fits this description nicely. The resemblance doesn't stop there either: if the first film aimed at being an irreverent Star Wars kind of space opera, the second one seems to want to cram both Wrath of Khan and The Search for Spock into its story.

With all the creation, destruction, sacrifice, family issues and leaden epicness on board, the question is: is it still a fun movie? And that's actually a very valid thing to wonder about. The first film very much coasted its way to success by being a lot of fun. While Guardians of the Galaxy Vol. 2 starts off strong, it quickly becomes a rather dour affair, and this is not helped by some very mean-spirited executions and massacres. No matter how flashy and spectacular it looks, slaughtering shiploads of sadists as a way to redemption is... well, satisfying perhaps, but not the kind of innocent fun and heroism the first film wallowed in.

"Family" has been a staple of American blockbusters for decades, the word being used as if it's a kind of magic. Just look at the Fast and Furious franchise for a recent example. Guardians of the Galaxy Vol. 2 leans very, VERY heavily on the familial tropes (not to mention their redemptive myths), and you need to be able to cope with a lot of sentimentality to fully enjoy this film.

So am I slamming it? Well... no. I still had fun with it. Like with Doctor Strange, it's one of the most colorful and psychedelic ways to enjoy a 3D IMAX theater. It's immensely spectacular even though its story (or stories) are quite intimate. Tons of sly in-jokes and stunt-cameos pepper the film, including its huge end credits sequence which gets interrupted by five (!!) teaser clips. And several of the Guardians get some great comedic moments, showing they haven't quite lost the chemistry which made the first film so great.

Also, I need to single out Pom Klementieff as the socially inept empath Mantis, who is absolutely fucking adorable, and a hoot when paired up with Dave Bautista's Drax.

All in all, I definitely liked the film, and liked it a lot at some moments, but I can't help being a little disappointed in not loving it. I'll be looking forward to seeing all these people reunite for a third film, but I will be a bit more apprehensive next time.