Now on Blu-ray: GUARDIANS OF THE GALAXY VOL. 2's Daddy Issues Light Up Your TV Screen 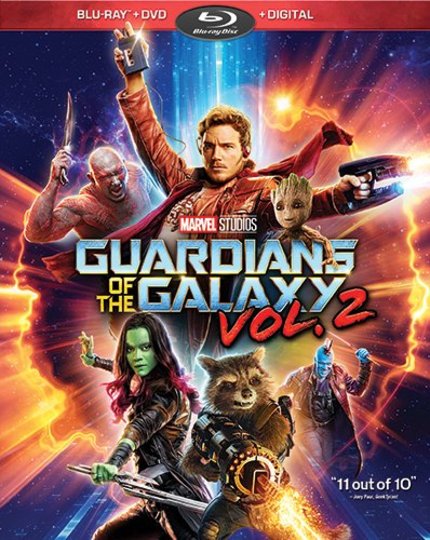 When it was announced that cult film favorite James Gunn (Super, Dawn of the Dead, Slither) was going to take the reigns of Marvel's Guardians of the Galaxy, a segment of the film underground was taken aback. While the MCU had toyed with having directors who were notorious for perhaps being a bit experimental and pulpy - Louis Leterrier, Joss Whedon, Joe Johnston - none were as out of left field as Gunn.

A truly subversive filmmaker who cut his teeth in the Troma sweatshops and whose previous features as a director, Slither and Super, were cult hits, but considered a bit too weird for mainstream audiences, Gunn's vision of the Guardians was sure to be spectacular, but what was unclear was whether it would be spectacular in a good way or in a horrendous crash-and-burn way. Thankfully, the film was a major success, and Gunn's idiosyncratic personality really shines through in a film that is both really, REALLY weird, and a huge crowd pleaser, which made a sequel almost a given, but could he repeat that magic?

In my eyes, the answer is demonstrably "yes", as Guardians of the Galaxy Vol. 2 mines the emotional cores of its characters in a way that the origin story just didn't have time to accomplish. Essentially a film about coming to terms with his childhood, Vol. 2 sees Star Lord (Chris Pratt) connecting with his extra-terrestrial/ "little g" god of a father, Ego (Kurt Russell). Along the way we get to know more each of the characters in a film that is as satisfying and balanced of an ensemble superhero film as one is likely to find.

Ard Vijn saw the film when it opened in Europe and had this to say:

With all the creation, destruction, sacrifice, family issues and leaden epicness on board, the question is: is it still a fun movie? And that's actually a very valid thing to wonder about. The first film very much coasted its way to success by being a lot of fun. While Guardians of the Galaxy Vol. 2 starts off strong, it quickly becomes a rather dour affair, and this is not helped by some very mean-spirited executions and massacres. No matter how flashy and spectacular it looks, slaughtering shiploads of sadists as a way to redemption is... well, satisfying perhaps, but not the kind of innocent fun and heroism the first film wallowed in.

I can't say that I agree with his criticisms of the film, now that I've seen it twice, I find that the relationship breaks in the film fall very well in line with Gunn's vision and sense of humor. Not sure that I would call it "dour", though I am curious about how the future Marvel films will deal with some of the massacres he mentioned that aren't really addressed in Spider-man: Homecoming. However, as a standalone film, even more than as a part of a larger "universe", Guardians of the Galaxy Vol. 2 works really well for me. Bear in mind I certainly have my own Daddy issues, but I can't help tearing up at the opening chords of Father and Son, and Gunn gets me.

This is a huge budget film released on Blu-ray by a multi-bazillion dollar company, so of course it looks and sounds amazing. Gunn's penchant for outlandish color schemes and '70s lasers works brilliantly on Blu-ray and this could be one of the most fun films to watch in all of the Marvel universe. The audio is similarly incredible, with the DTS-HD MA 7.1 track putting the audience in teh middle of the action is what are some awesome aerial battles. I have not a single technical nit to pick.

The extras are a bit thin, unfortunately, but that seems to be the case with many blockbusters, in spite of what I'm sure is an entire separate film crew on set just for EPK footage. There are a quartet of behind-the-scenes featurettes focusing individually on Gunn as director, visual FX, music and score, and the cast, all of which are worthwhile watches, but the run time of all four sadly only amounts to about half an hour. There is also a glorious goofy music video for the end credits disco ditty Guardians Inferno, featuring David Hasselhoff that my wife actually thought was a vintage artifact until she saw Dave Bautista's massive frame in a pair of angel wings, it is really well done and a lot of fun.

The best of the extras is definitely Gunn's feature length commentary in which he discusses every minute detail of the production and talks about what a perfectionist he is, mentioning for example, that the opening credits sequence went through more than 4,000 iterations before it made it to the big screen. Seems like overkill to me, but it's hard to argue with the end result as that is one of the most fun sequences I've seen in any film in a long time. I guess if you've got the budget and the time, may as well use them!

Guardians of the Galaxy Vol. 2 looks and sounds great on Blu-ray. If you loved it in the theater, you'll love it at home, and be sure to give the commentary a listen, it's chock full of neat details.

Do you feel this content is inappropriate or infringes upon your rights? Click here to report it, or see our DMCA policy.
Blu-rayChris PrattJames GunnKurt RussellMarvel