Destroy All Monsters: The Abysmal Fathers Of GUARDIANS OF THE GALAXY VOL. 2 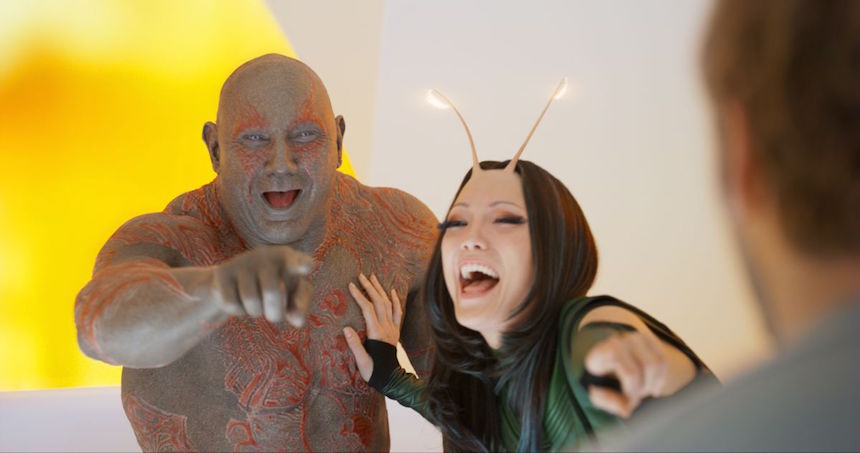 My dad went in for surgery this week, which (Thor be praised) is a new experience for our family - the first hospital visit, the first recovery period, the first time dealing with that set of worries. And no need to worry, after all: he's fine.

As such though, watching Guardians of the Galaxy Vol. 2 on Friday night, I was simultaneously hit by my own desire to roll my eyes at yet another comic book movie whose sole purpose and function seemed to be the plumbing of Daddy Issues(™), and my simultaneous, in situ understanding that yeah, feelings about fathers are some complicated, complicated shit. By the time Cat Stevens' "Father and Son" was joining the soundtrack in the final moments of the film, a harder man than me wouldn't have been wiping away tears.

Arguably, GOTG2 isn't paying anything off that Vol. 1 didn't require of its own sequel. Star-Lord (Chris Pratt) has dealt with the death of his mother, several decades after the fact. The ersatz family (Gamora, Groot, Rocket and Drax) has come together on the Milano II. The lingering question of why the gang survived their encounter with an Infinity Stone in their dance-off with Ronan the Accuser is down to Star-Lord's father, who turns out not to be J-Son as in the comics (thank all the gods and celestials in the cosmos), but is instead Ego the Living Planet.

Not much subtlety there: Chris Pratt's father is Ego. Ego is, further to the unsubtlety, a god. A very bad god, and a very bad dad. I guess, if we're going to go back to the daddy issues well at all, we might as well go for the daddy who is the Daddy of All Daddies.

Kurt Russell is great at playing God. He gives a beautifully Shatnerian performance as Ego, and his whole section of the film is a better gloss on Star Trek V than Star Trek V was. (Not even kidding: if Vol. 1 was the MCU's Star Wars, this one feels a lot more like its Star Trek. There's even an antennaed empath on a patently artificial planet set, who's carrying a plot-dementing secret. "The Cage" much?)

Ego arrives on the scene riding a giant space ova like a chariot, making me genuinely wish he'd cross over with Anthony Hopkins' Odin at some point, because those two were born to play a scene against one another. At various points in the film, Ego/Russell is an electrical neuron man and, yes, a big red planet with a face. In the middle of it all, he has a game of catch with his kid, only they're throwing a glowing ball of blue plasma, making Field of Dreams feel like a tame, unmagical affair. It's bonkers. Could anyone but Kurt Russell have pulled this off?

Naturally, Ego turns out to be a real piece of shit, with plans to - I dunno - reform all the planets in the galaxy with cancer-blobs he's been surreptitiously planting on them over the past couple thousand years. The blobs expand and the people run in terror. This again? (It's a mark against Vol. 2 that we were significantly more invested in Vol. 1's apocalyptic battle over Xandar, a planet we'd never seen before and had no emotional interest in, than in Vol. 2's literally galaxy-threatening final movement. Infinity War, take note: end-of-the-world stakes, even at a cosmic level, have long since ceased to be a workable trope in these movies.)

Anyway, Ego's an asshole, because daddy issue dramas can't exist unless the fathers turn out to be, or always were, monsters. Guardians 2 has these in abundance. On the varying blackscale of terrible fathers, Ego is superseded only by Thanos, who pitted his two little girls (Gamora and Nebula) against each other in persistent death matches, ripping pieces off the latter every time she lost. It's an appallingly dark backstory for Gamora and Nebula's piece of the tale, one which is only carried off thanks to Karen Gillan and Zoe Saldana's willingness to slap on the greasepaint and just go with it. It's not easy being green, or blue, but being daughter to purple makes both significantly worse.

This leaves Yondu (Michael Rooker, who is also blue) as the film's presumptive "good" daddy, though Vol. 2 seems to get so lost in its own perspective on the redemption of its pirate bad guy that it kind of doesn't notice that Yondu's still a homicidal maniac who abused Peter relentlessly as a child. This makes his only qualifying credential above Ego simply the fact that he was in the room at the time, instead of somewhere else. By the end of Vol. 2, the biggest special effect of all is that Peter Quill isn't a soulless, blubbering mess.

Same for Nebula, same for Gamora. While almost all of it is described rather than seen, there's some astonishing offscreen child abuse referenced Guardians of the Galaxy, so much so that it often (and thoroughly) overwhelms the film's sense of fun. I'm all for a pack of bad guys who are actually good guys, but these bad guys' tormentors are so much worse than the standard comic book nastiness that it's hard to recover, even with Baby Groot. And especially when Baby Groot is also murdering people.

If there's a real structural flaw here, though, it's one that is perhaps endemic to all comic books and their ceaseless interplay of daddy issues: because comics never move forward in time (and presumably, neither will the MCU), we always see these characters dealing with the mistakes of the past, and never repealing those mistakes for the future. For example, we have the infant Groot as unstoppable cuteness machine here in Vol. 2, but his status as the ad-hoc family's "child" is never delved into. This leaves a beat unplayed: if Gamora and Star-Lord are parents now, how do they feel about it, in light of the ghastly parents they've escaped from?

Ditto Drax, who is a character I am apparently genetically incapable of getting tired of, who here references the daughter he lost before Vol. 1, but brings none of his parenting ideas to bear on the others, or on Groot, or on anything else, except maybe his somewhat abusive relationship with Mantis, which probably isn't what we should be going for.

In fact, the willingness by Gunn and his team to lean on Drax's relentless verbal abuse of Mantis - even if we are meant to intuit that his unabashed honesty is some kind of reverse-engineered kindness - suggests an even darker outcome, one in which this generation of abused children have learned nothing, improve upon nothing, and continue to visit the same evils upon their offspring as was visited upon them. (One of the film's mid-credits gags has Star-Lord unloading on a petulant, teenaged Groot.)

The romantic subplot between Gamora and Star-Lord is somewhat undercooked, but all of the above made me root for it in spite of myself, if only because it would be legitimately interesting - and for this genre, (nearly) ground-breaking - to see them pair off, procreate, and be faced with a half-pink / half-green baby of their own, with whom to (hopefully) do slightly better than Ego and Thanos did with them.

It'll never happen - these movies aren't interested in that kind of heroism - but after a film built on so much bad parenting, it seemed more appealing by half than anything Guardians of the Galaxy Vol. 3 might offer up.

Do you feel this content is inappropriate or infringes upon your rights? Click here to report it, or see our DMCA policy.
Chris PrattJames GunnKurt RussellMarvel Cinematic Universe