Destroy All Monsters: The Normalized Atrocities of Julia Ducournau's RAW 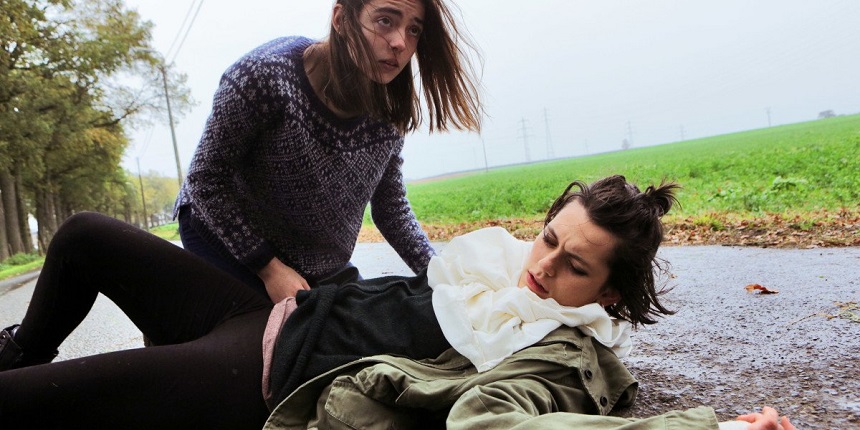 Last Monday night's screening in the Midnight Madness program at the Toronto International Film Festival gained a week's worth of notoriety when The Hollywood Reporter announced that three people had fainted during the show and were taken away in an ambulance.

Poorly hydrated? Bad sausage? Or an Exorcist-esque throwback to the days when people could be so overcome by the horrors of a horror movie that they might actually have a real-world physical breakdown?

The film was Julia Ducournau's Raw, a cannibalism horror movie par excellence (or is it a dark comedy?), so the latter explanation isn't out of the question. If you have an even marginally psychosomatic gag reflex, Raw is going to be thumbing it recursively for most of its 90 minutes, starting with a scene that will haunt your nightmares every time you clean out the hair trap in your shower's drain for the rest of your life.

Besides turning itself into this festival's cinnamon challenge (the Saturday repeat screening was packed with wannabe fainters), Raw succeeded as a buzz-generator because it's a generally excellent slice of genre fiction, with a lot more going on under the hood than its exploitation logline initially suggests.

Particularly, it's a terrific little essay on how, with the right grooming and socialization, you can normalize pretty much any behaviour with a group of people. Cannibalism itself might be a stretch, sure... but as a metaphor for destructive behaviour, eating people is about as good as it gets, no?

We meet Justine, a freshman at a veterinary college, whose older sister Alex also attends. Coming from a strict vegetarian family (and surprised that she's flying solo on that front, given that she's at a school for the care and treatment of animals), Justine is horrified that frosh week hazing includes the forced consumption of rabbit kidneys, among other things - and is even more horrified to discover, as the week bears on, that a voracious appetite for meat, and eventually human flesh, has taken hold of her.

The way the culture and people around her proceeds to encourage Justine to tease out those cravings is the heart of the piece.

Raw is obviously playing within the imagery of college hazing for its metaphor of how collectively socialized behaviour, and the mob mentality, can pretty easily lead to things going too far. But the movie's thoughtful eye extends to even more significant things: the way womens' bodies and sexualities can be throttled and controlled through social pressure, for one; and critically to 2016, the way any abhorrent behaviour can be normalized through a program of grooming and desensitization. If anyone asks you why so few people seem to care that Donald Trump is a colossal, on-the-record racist, show them Raw. (And then stand back.)

The vegetarian/veterinarian conflict I mentioned above is a good place to start, as a table-setting poke at the way cultures treat normal/out-of-the-"normal" behaviour amongst their midst. Though Justine's vegetarianism is a plot driver, it is presented as colossally weird that she's the only student at this veterinary college with more than a passing empathy for the feelings of the animals being treated. One group conversation questions whether it's possible to rape a monkey; not physically, but in terms of whether the monkey has rights, feelings, and memories that would lead that to verifiably be called "rape."

It's a no-brainer moment - the film clearly pointing out the eerie hypocrisy not just among the students, but among anyone who subsists on the lives of animals without at least a question about the morality of doing so. Raw goes on to underline the point through subsequent scenes as the students work on various animals with dispassion bordering on boredom.

(One notable conversation with Alex takes place while she has her entire arm up a cow's ass. Real cow, real ass. Raw would be a demonstrably vegan movie in its message, if it wasn't fundamentally exploitative in its production approach.)

Justine develops a terrible, unexplained rash after eating the rabbit kidneys during hazing. Her doctor tells her a story about an obese female patient (this choice very deliberate for what the film is trying to do), who was routinely harassed and abused by medical staff for being overweight but never spoke up about it because she wanted to fit in and be normal... "average."

It's the mission statement of much that will follow. Justine assures the doctor that she is normal, but this betrays the fact that she is also questing for the stability of some particular aspects of agency of her own: what she wants to eat, who she wants to fuck, what she wants to be when she grows up. You can't stand up for those things and blend into the crowd at the same time, and life will be about choosing which flow to go with. Justine's gay roommate will later shout that he didn't spend a lifetime defending his sexuality just to start having heterosexual relationships now, when she crawls into his bed.

Raw's rubber hits its proverbial road towards the end of the first act, in an extended scene that is as sleekly funny as it is stomach-churningly gory. Justine has reconnected with her sister Alex after a week of the older sibling's frustration with Justine for not getting with the frosh week program. (Alex ate Justine's rabbit kidneys for her, before forcing Justine to down a nugget anyway.)

Reunited, Alex teaches Justine how to pee standing up, and then they head back to the dorm for a little amateur Brazilian waxing. (You know, as one does.) We've noticed previously that Justine doesn't shave her armpits, and according to Alex, it's even "worse" down south - and in the tried-and-true shaming/control mechanism of self-reinforced cosmetic beauty standards, Alex assures Justine she'll never get laid if she doesn't start clearing the bush.

A series of events transpires which I won't spoil here, but suffice to say that the wax job goes badly wrong, and eventually leads to Justine - her building meat-craving gone berserk - eating a piece of her sister. Justine is horrified by what she's done, but Alex - who we now see has been easing Justine up to this line for most of the first half of the film - sees the opportunity to solidify the transgression.

Alex stages a car crash, and when she goes to check on the car's occupants, she emerges from the passenger door with their blood dripping from her chin, and calmly invites Justine to join her. It's icky and profoundly unsettling, like watching a sexual predator finally make his move on a victim he's been grooming. As though Alex is saying, it's okay, we've already come this far, and you know you want to.

It's the most significant moment in the film: one character looking at another from the other side of a transgressive line and excusing/facilitating the unspeakable behaviour. With her defenses battered by everything that's come before and her sense of right and wrong, normal and abnormal, pushed headily into "blurry line" territory by the changing social mores around her, it's all too easy for Justine to stumble into her sister's waiting, cannibalistic arms.

And Justine does want to. That's significant as well. Though Raw's eventual diagram of why Justine is drawn to cannibalism is a bit facile, the metaphor still plays just fine: substitute it for any unwelcome social behaviour (violence, transgressive sexuality, racism, texting at the movies), and recognize that these processes of socialization succeed in part because they make "okay" some contradictory impulses that live in just about everyone, but for which social controls exist that hampers (or outright criminalizes) their expression.

The hazing rituals at Justine and Alex's schools include dousing freshmen with fresh blood, or (in a parallel, equally delicious image system) dumping a bucket of blue paint on a boy and yellow paint on a girl, and forcing them into a closet, not to come out until they've turned green. They codify and lubricate social behaviour around class, privilege and sexuality. They can be used to make these people do pretty much anything - to turn freshmen into upperclassmen who (like Alex) will visit the exact same miseries on the new crop next year, and in so doing, enforce their arbitrary standard of "normal." And if "normal" includes eating a finger or two? Hey, who's gonna stop us?