Have Your Say: Is Arrow's FEMALE PRISONER SCORPION Boxset True Or Too Blue?

(Yo listen up, here is a story, about a little guy that lives in a blue world...)

There is this issue buzzing around in Blu-ray forums about that Female Prisoner Scorpion boxset from Arrow. The extras and everything are nice and all, and the image is sharper than in previous sets, but... and this is a BIG but with these films... the accusation is that Arrow's set has screwed-up colours. All four films look rather blue when compared with earlier releases.

Arrow has already released a statement, acknowledging that the transfers have a tendency towards cyan, and says this is due to doing a very rigorous and correct restoration and transfer on such old materials, and that these colours accurately reflect the source materials they got from Toei Studios.

Here is a comparison between the Eureka boxset from seven years ago (which had the first three films), and the current Arrow set (which has all four of them). All shots are from the second film, Female Prisoner Scorpion: Jailhouse 41.

As in the image at the top of this article, the Eureka boxset shots are on the left, and Arrow's are on the right. You can click the image below to see a larger version.

So what do you say? Which colour-scheme would best fit how these actually looked like on the big screen? Please chime in, in the comments below. The more knowledgeable on the subject, the better, but please HAVE YOUR SAY! 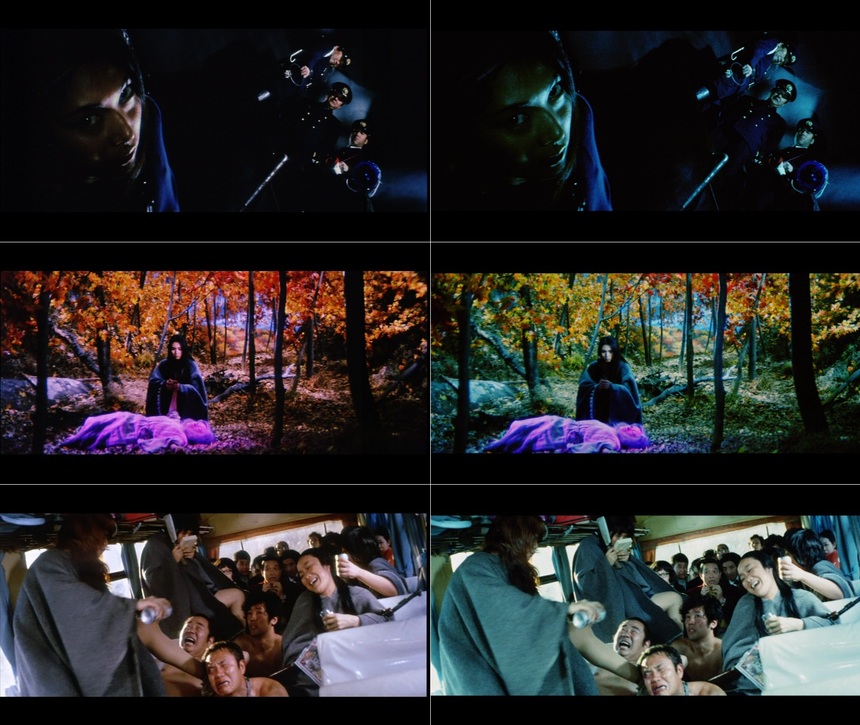 Note: I took shots from the DVDs in both sets. I didn't take shots of the Arrow Blu-rays, but rest assured that colour-wise, they look similar to the Arrow DVDs.