Over the last few weeks a pair of very different films that both center around folk stories have arrived on Blu-ray in the US. Michael Dougherty's long awaited follow-up to his suprise cult hit Trick 'R Treat is another holiday themed horror comedy in Krampus, and 2015 Sundance standout The Witch takes a much more serious look at tales of American folk horror in the 18th century.


Peter Martin and Ryland Aldrich contributed to this story. 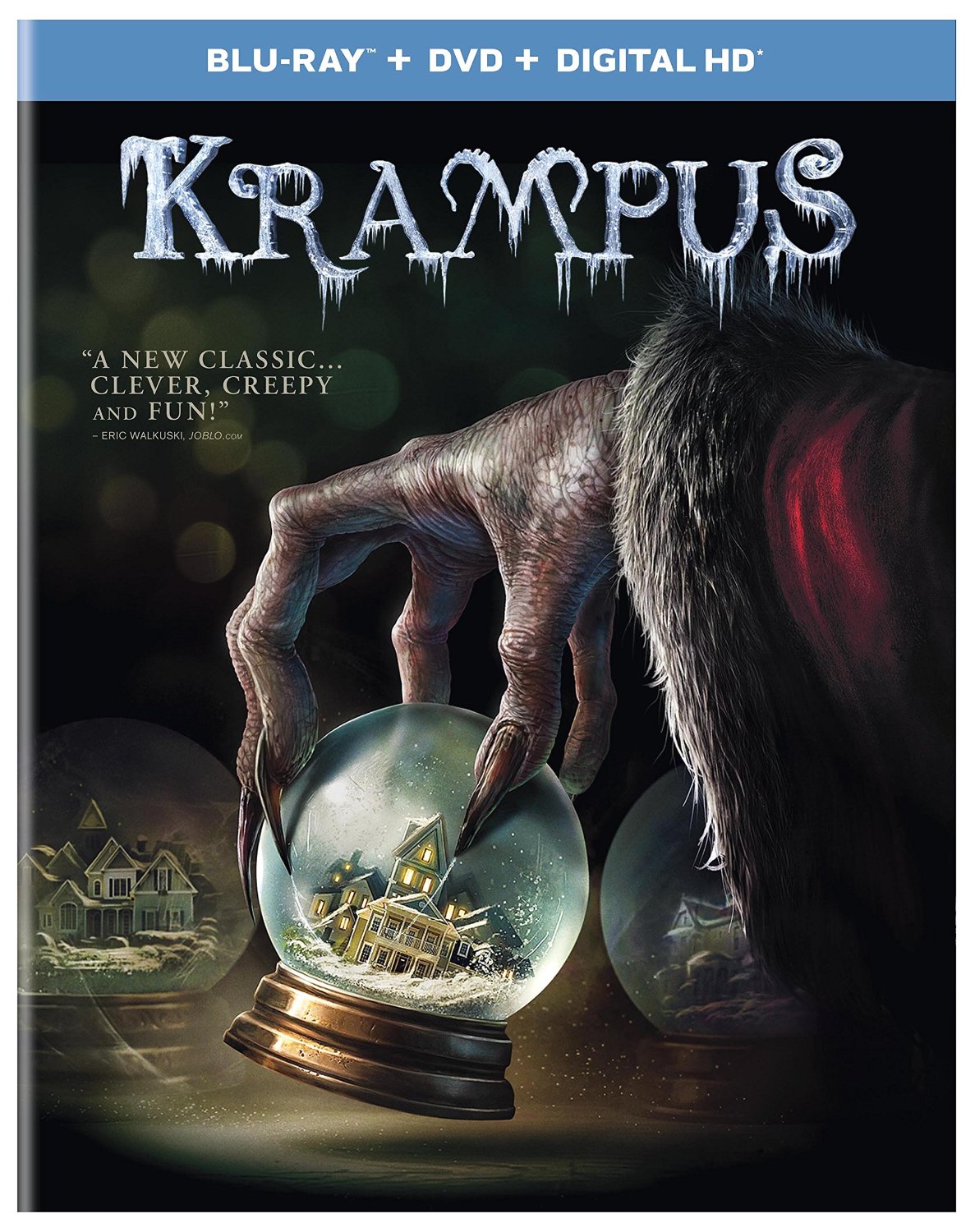 Back in 2007, Michael Doughtery finished a Halloween horror film called Trick 'r Treat. This delightfully gory anthology film made a few cursory appearances at festivals over the next two years and then vanished without a proper theatrical release. In late 2009 it hit home video and the horror fan community went wild for it. The film has become one of the most popular horrors of the century and fans have been waiting for a follow up for years. Last Christmas they got their wish when Dougherty's Christmas themed horror comedy, Krampus, hit theaters just in time for the holiday season. Was it worth the wait? Our own Peter Martin had this to say:

Krampus becomes steadier as it develops, enlivened by Dougherty's creative directorial choices and bolstered by the very solid, eventually nuanced performances by Toni Collette, David Koechner, Adam Scott, and Allison Tolman. Koechner and Tolman (TV's Fargo) are especially good at nailing the changes in their characters, while Collette and Scott are empathetic and believably heroic parents...

Not to overpraise it, but Trick 'r Treat set a surprisingly high standard for Dougherty to follow. Almost inevitably, his long-awaited sophomore effort is less surprising and falls short of those heights, yet Krampus demonstrates that it is possible to elevate a movie from humdrum holiday cheer to genuine horror, all in 98 minutes or less.

I'm pretty much in agreement with Peter on this film, while it isn't fair to judge Krampus against Trick 'r Treat, it is inevitable. In that comparison, Krampus certainly falls short. It doesn't help that it comes only a few years after a truly remarkable film warmed the path using the Krampus myth in Jalmari Helander's Rare Exports. Both Krampus and Rare Exports do a great job at bridging the gap between child friendly and adult horror. Never too gory nor too saccharine and safe, both films manage to give us realistic child protagonists that are fun to root for. Rare Exports just manages its tone better and doesn't rely so heavily on tropes to establish the situation.

I certainly enjoyed Krampus, as did my 11-year-old son, and in the end that's really the most important metric I have to judge any film. While it may not quite make it into the Gremlins strata of holiday horror classics, its liberal use of real performers in special make-up and costumes, as well as practical effects did warm my cold heart and gave me a bit of a nostalgic glow for those films with which I grew up. Definitely worth checking out.

Lionsgate's Blu-ray of Krampus is a solid package that definitely helps me warm to the film more than I may have at first. Since this is a new release of a contemporary film, the image and sound quality are top-notch. I tend not to worry too much about the A/V aspects of films this recent, and this Krampus disc is another example of a solid reproduction of a modern film.

The extras really help to contextualize the film as well as deliver enough background to help me understand and appreciate the amount of work that went into the project. Primary among the bonus material are a few featurettes that go behind the scenes. First is the Blu-ray exclusive Krampus Comes Alive! which features a number of short pieces on Dougherty ideas, production design, and my favorite bits, an in-depth exploration of the numerous pratical effects in the film. There is also a pretty cool behind-the-scenes look at the work done my WETA Workshop on the film, WETA are always a lot of fun and their enthusiasm always comes through. Less impressive were a few typically shallow featurettes that talk to the cast and basically show everyone enjoyed their time on set. Good to know, but not terribly informative. There is also a solid audio commentary from the filmmakers, but a lot of what they have to say is covered in the other bonus materials.

I liked Krampus the first time I watched it, but after going through the bonus materials, I have a new appreciation for this passion project and definitely look forward to more from Dougherty. 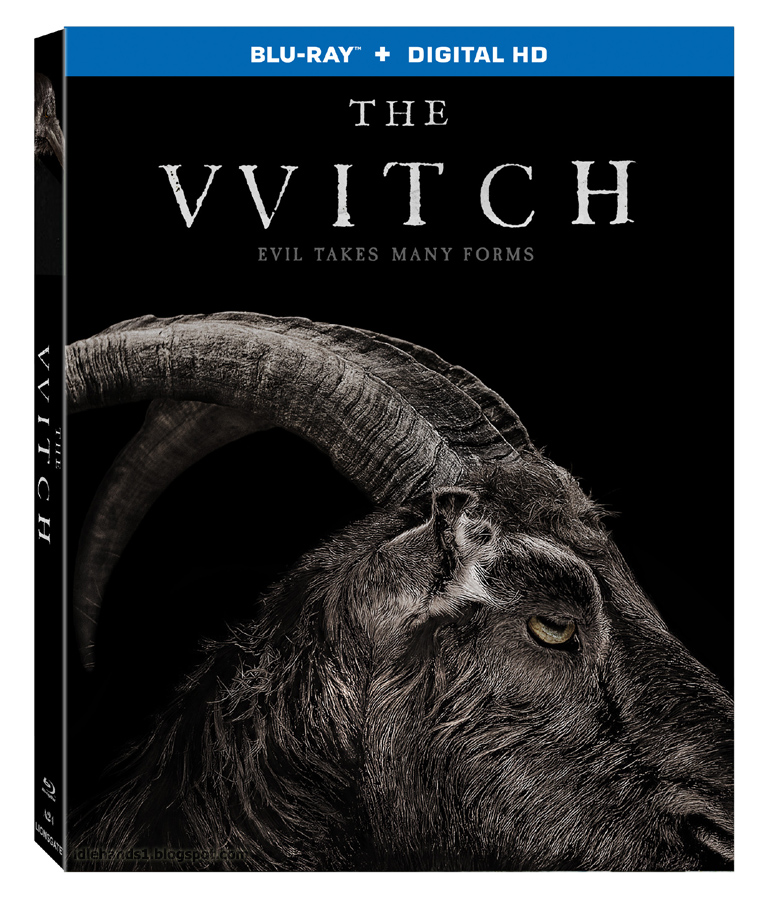 Robert Eggers' The Witch premiered at Sundance in 2015 to an overwhelming wave of praise. In fact, the film was so well received that it even won its first time director an award at the festival. Over the next year the film made the festival rounds fore finally reaching cinema screens across the US this January to a secondary wave of overwhelming praise. The Witch is now on home video, and those of us who missed it in the cinema can experience this deeply evil folk tale in the comfort of our own homes.

Twitch's Ryland Aldrich saw the film at Sundance last year and was among the impressed:

Set in New England circa 1630 (well before the Salem Witch Trials), The Witch takes us inside the challenging lives of a homesteading family, recently banished from the colony by the righteous acts of pious father William (Ralph Ineson). With crops failing and a harsh winter looming, eldest daughter Thomasin is called on to shoulder more of the burden of taking care of her four younger siblings. Tragedy strikes when the infant child mysteriously disappears while under the care of Thomasin. This sets in motion events that quickly threaten to turn an already difficult situation poisonous...

I'm not usually an easy mark for critically acclaimed horror. I do love my scary movies, but several of the most highly praised over the last few years have left me rather cold. The Witch, like Ryland says, is more than just a horror film. While at its core it is a document of the horrific events that destroy a family, it is more a drama documenting the way the family copes with this horror. That's not to say that I am without criticism. The film's final reel take a turn toward the ridiculous that really dampened my enthusiasm, and I'm a big believer in a great ending, but I am able to look past that to see what is great about this film.

Lionsgate's Blu-ray release of The Witch is predictably solid. The A/V is as good as I mentioned on Krampus, with the modern tech capturing the old-timey look that director Eggers was so desperate to mimic. The film's incredibly effective sound design is also captured quite well in the immersive DTS-HD MA audio track with effects spread out through the field and the period-correct dialogue coming through clearly. No complaints.

Much of the bonus material harps on the effort put into making sure that The Witch was period-correct. While a lot of the background on this aspect of the film is fairly interesting, I can't help rolling my eyes at some of it. I get it, you made sure that ever straw of hay and button on every jacket was perfect, I GET IT. But, it is Eggers' movie and it came out pretty well, so I can't complain too much. If you're into that sort of thing – discussions about artisan woodworkers and such – you'll have plenty to explore on the disc. My favorite excerpt is a Q & A from a screening in America's infamous witch-hunting capital, Salem. Overall, a solid package.