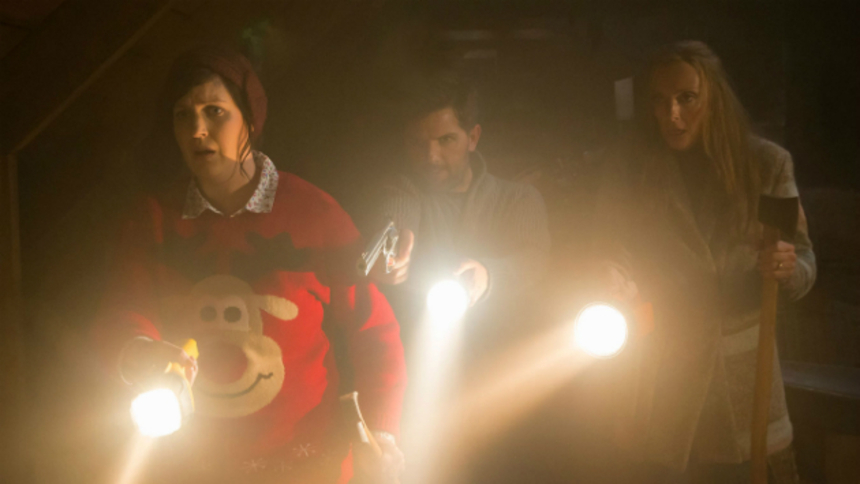 Slowly ramping up to a full-blown, charged-up holiday horror movie, Krampus proves that filmmaker Michael Dougherty is more than a one-trick pony.

More contained and more serious than Trick 'r' Treat, Dougherty's feature directorial debut, Krampus is rocky at first as it reheats extremely familiar 'dysfunctional family members clash at Christmastime' tropes without adding anything fresh or new. Tom (Adam Scott) and Sarah (Toni Collette) live with their teenage daughter Beth (Stefania LaVie Owen), their young son Max (Emjay Anthony) and Tom's mother (Krista Stadler). The latter is called Omi -- German for 'grandmother' -- by the family; she only speaks German, which is the kind of idiosyncrasy that practically screams out, "This will be an important plot point later!"

Sarah's sister Linda (Allison Tolman) soon arrives for the holidays with her husband Howard (David Koechner), and three children, along with an unexpected guest, Sarah and Linda's constantly complaining Aunt Dorothy (Conchata Ferrell). Oh, and a little dog, too.

Thing get off to a sour, strained start as the extended family sits down to dinner and young Max's letter to Santa, beseeching and far too honest for public consumption, is stolen and then read by one of his cousins. Eventually, a strange creature (i.e. the title of the movie) makes an appearance that throws everyone's holiday plans into disarray. Krampus becomes steadier as it develops, enlivened by Dougherty's creative directorial choices and bolstered by the very solid, eventually nuanced performances by Toni Collette, David Koechner, Adam Scott, and Allison Tolman. Koechner and Tolman (TV's Fargo) are especially good at nailing the changes in their characters, while Collette and Scott are empathetic and believably heroic parents.

Indeed, for a movie that puts so many children in danger, it's reassuring to see the lengths that their parents are willing to go to try and save them. While the opening scenes are a chore to endure -- more stinging, on-point wit would have been welcome -- once the action gets rolling, Dougherty's strengths become more obvious, especially in the framing and pacing of the material.

Not to overpraise it, but Trick 'r' Treat set a surprisingly high standard for Dougherty to follow. Almost inevitably, his long-awaited sophomore effort is less surprising and falls short of those heights, yet Krampus demonstrates that it is possible to elevate a movie from humdrum holiday cheer to genuine horror, all in 98 minutes or less.

The film opens today in select theaters throughout the U.S. Visit the official site for more information.

Do you feel this content is inappropriate or infringes upon your rights? Click here to report it, or see our DMCA policy.
Adam ScottAllison TolmanDavid KoechnerMichael DoughertyToni Collette