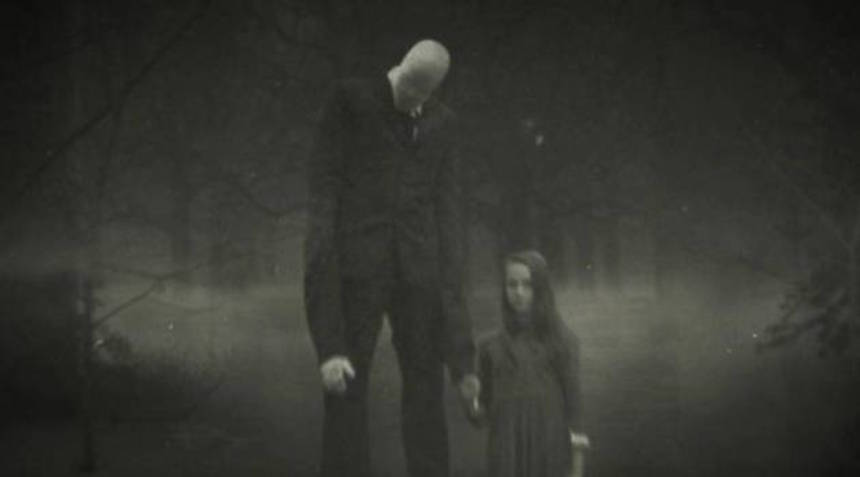 If you have not heard of the Slenderman at this point, trust me that your kids have. He is a tall thin man in a suit usually seen looming in the background of locations where children play or blending into a sparse forest of tall trees, that came about from unconscious desires of the internet to create its own digital folklore.

The opening minutes of Beware The Slenderman promise an experience along the lines of The Blair Witch Project meets Seven. It begs the question on whether HBO contractually mandates swanky opening titles on the various properties they develop for broadcast. The former mock-doc was made famous through savvy use of the internet in building its own mythology, and the latter was a cold thriller featuring sensationally violent murders as the mission statement of warped ideology of a mysterious John Doe.

The actual content of the documentary is far more interesting than what the credit sequence (or poster) pledges. Director Irene Taylor Brodsky goes deep into the specific case of two Wisconsin preteen girls who brutally stabbed one of their friends, nearly 20 times, and left her in the woods to die of her injuries. The victim, Peyton, (somehow) survived, and the perpetrators were were caught in short order. It is one of those stories you might have heard on the news in a couple years ago, registered the shock of it, that they did this due to belief in an internet meme, and then went on about your life. Documentaries like this one serve the place of an increasingly neutered long-form print journalism in that they allow a focused look at the context and consequences, well beyond national headlines.

Featuring extensive courtroom footage, candid interviews with the family members of the accused girls, and the online origins of the crowdsourced boogieman, Beware The Slenderman, plays like bizzaro world version of Paradise Lost: The Child Murders At Robin Hood Hills, the superb West Memphis Three doc released by HBO in the 1990s (followed by two sequels). In that film, three teenage boys were convicted of committing gristly murders in Arkansas, and convicted mainly on the grounds that they listened to Metallica and read books by Aleister Crowley (coupled with unreasonable coercion by the police to confess.) The questionable idea that heavy metal music and satanic books could induce impressionable teens to murder was taken seriously to the point of putting blinders on due process.

Here in 2014, via videotaped interrogations which provide the through-line for the film, Morgan and Anissa, separated, both freely admit that their belief of an internet meme made them do it. One of the key, but unspoken messages of Beware The Slenderman is that even in a case where pop culture actually did made the girls do it, the legal system is still utterly broken when it comes to youth. Deeply disturbing to a bleeding-heart-Canadian such as myself, was fact that neither of the accused 12 year olds could have any body contact with their parents during the trial period (now in its second year) and were tried by adults by a tough-on-crime Wisconsin court. No hugs. Morgan's mother has theories, but no answers because she has been prevented from speaking to daughter since the arrest. The girls were not given phone calls. Both fathers spend much of their on-screen interviews in tears. One gives an impassioned, but pragmatic, monologue on technology, parenting, and the punishing stress of trying to move forward with any sense of normalcy.

We have no idea what kinds of lives our children live inside their heads, and increasingly, the internet allows to magnify and participate the collective imagination, in ways that the brothers Grimm (or Metallica) could never have comprehended. Morgan's mother thinks back to the time where her daughter had no empathic reaction to the mother die while watching Bambi. It is a powerful anecdote, but one wonders if this experiment were conducted formally on hundreds of children, if Morgan's reaction is more common than we intuit. Perhaps from a lack of media comprehension or simply the universal built-in-narcissism of those who are so very young.

A montage of Anissa's youtube history (Beware of Google+) shows a mixture of videos with a wide variety of inquisitive, dark and silly clips. No different that what my son watches. I remember having a conversation with him regards to how everything is logged and made public, but it was more in the vein of privacy than a potentially post-criminal pop-psyche analysis.

Although not mentioned in the doc, I was reminded of the two girls who murdered one of their mothers in the 1950s in New Zealand. This true story was made into a film called Heavenly Creatures by Peter Jackson (who, co-incidentally, did his own West Memphis Three doc a few years ago) and one can see that socially awkward pre-teens can get lost in fantasy worlds. A quick visit to DeviantArt or CreepyPasta, shows that the artwork and storytelling is deeply engaging and alluring material, where 'Slender' is more often portrayed as a melancholy parent figure, a grim reaper with a heart, than a Victorian-era witch or Freddy Krueger.

Morgan and Anissa, only shown in custody and in photos and videos captured by their parents before the crime, appear to have only wanted to run away into their fantasies, as so many girls their age do. While their crime is profoundly serious -- it is noteworthy that the neither victim nor her family participated in the documentary -- but it is a sad state of affairs they they be tried as adults. The horror of this crime is an extreme outlier of puberty and mental illness. HBO may be happy to hook an audience in on sensationalism, but Beware The Slenderman fortunately delivers a conversation that is more significant and humane.