PREACHER, PEE-WEE'S BIG HOLIDAY And More To Premiere At SXSW 2016 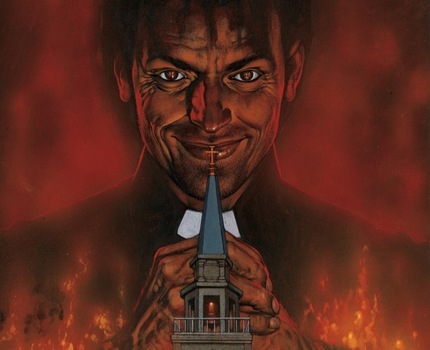 SXSW fans, hold on to your hats, there are some weird and hopefully wonderful films coming your way this March. Preacher, Seth Rogan's adaptation of the cult graphic novel of a priest (Dominic Cooper) trying to rid the world of evil, will have its world premiere at the festival. Also having it's world premiere is Pee-Wee's Big Holiday, Tony Robbins: I Am Not Your Guru, and Beware the Slenderman.

These titles will join previously announced opening night film Everybody Wants Some from Richard Linklater, as well as the North American premieres of Jeff Nichols' Midnight Special, and Rachel Tsangari's Chevalier.

I don't think there is a film among this new list that I wouldn't see; Rogen's take on Preacher should be interesting, I was always a fan of Reuben's more-than-a-little insane comedy character, Beware the Slenderman sounds like a great twist on a fairy tale, and while I've never thought much about Tony Robbins, teh hold he has over people would be fascinating to investigate.

SWSX 2016's feature line-up will be fully announced on February 2nd. Details on the announced films below.

Beware the Slenderman (World Premiere)
Director: Irene Taylor Brodsky
In this horrifyingly modern fairytale lurks an online Boogeyman and two 12-year-old girls who would kill for him. The entrance to the internet quickly leads to its darkest basement. How responsible are our children for what they find there?

Tony Robbins: I Am Not Your Guru (World Premiere)
Director: Joe Berlinger
Granted unprecedented access, Berlinger captures renowned life and business strategist Tony Robbins behind the scenes of his mega seminar Date with Destiny, pulling back the curtain on this life-altering and controversial event, the zealous participants and the man himself.