Review: MEN AND CHICKEN, The Ones We Love 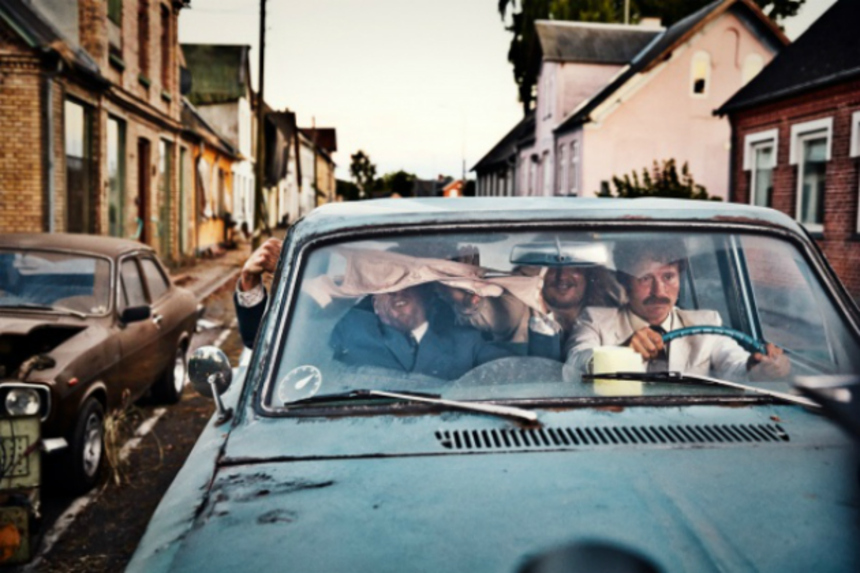 Anders Thomas Jensen has reunited with long-time collaborator Mads Mikkelsen for Men And Chicken, an utterly strange, absurdist film that revels in Dr. Moreau-type conventions and the awkwardness of long-lost family, as well as the family that can seem more like a noose than a life raft.

Mikkelsen is hardly recognizable as his usual dapper self in the guise of Elias, a man who lives in a kind of arrested development. He can barely restrain himself from jumping any woman he comes across, and he definitely can't keep his hands off himself.

Written by Jensen, the character of Elias, as well as the three brothers he finds later in the film, are more galloping puppies than rabid dogs. This isn't the usual type of character the world knows Mikkelsen for playing, but the actor does it with such nuanced panache that you believe him, and that's Mikkelsen's gift and the reason why he's become so well known in the last decade.

After the death of his father, Elias and his non-feeble-minded brother Gabriel receive a video tape from their late dad telling them about their biological father and where they can find him. Played by David Dencik, Gabriel has the kind of resigned tiredness that comes from decades of looking after someone who presumably must be kept out of messy situations, and possibly, jail. 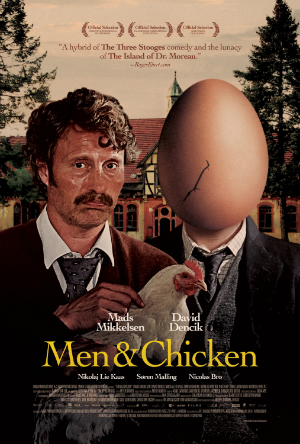 They arrive on the tiny island of Ork to find this other father. After locating the right house, they are assaulted immediately with pots, furniture, and even a taxidermied swan by the gatekeepers --and brothers. These assorted miscreants are just like Elias, more or less, and reside in an unkempt estate. The grounds and even the house are overrun with animals, some of which sport genetic mutations that gives one pause, to say the least.
And then we are back in Dr. Moreau land. Without giving too much, away, the inbreeding and physical and mental defects of the brothers offer indisputable evidence to the question of familial relations. There are many secrets to be discovered, and once Gabriel swiftly throws back the covers on the biggest one of them all, you may be asking yourself why Men And Chicken isn't a horror film.
Jensen's writing is what convinces you otherwise, as the dark comedy he's created is infused and directed with a masterful hand. It makes you wonder how many drafts of the script were written to conclude in the final product. Lesser films attempting a veritable cornucopia of genres usually fail noticeably to be all of them, even one of them well. Jensen transcends these rough waters with seamless delivery.
The story has elements of a gross-out comedy blended with a Scooby Doo episode, by way of an old dark house mystery. Perversion, tragedy, and abuse abound, and there are some truly disgusting moments once the film's journey delves into real darkness. However, Men And Chicken is also a touching look at the ties that bind, and however we may try, we can never really sever ourselves from the ones we love.

Review originally published during Fantastic Fest in September 2015. The film will open in select theaters in New York and Los Angeles via Drafthouse Films on Friday, April 22.

Do you feel this content is inappropriate or infringes upon your rights? Click here to report it, or see our DMCA policy.
Anders Thomas JensenDenmarkMads Mikkelsen