Our favorite UK based Asian film distributors are at it again, this time with a pair of Kitano Takeshi classics on Blu-ray.

Earlier this month, Third Window FIlms released KItano's Kikujiro and Dolls on Blu-ray for the first time in English friendly editions. Are they worth your money?

We sure think so, check out the gallery below for more!


Todd Brown and Niels Matthijs contributed to this story. 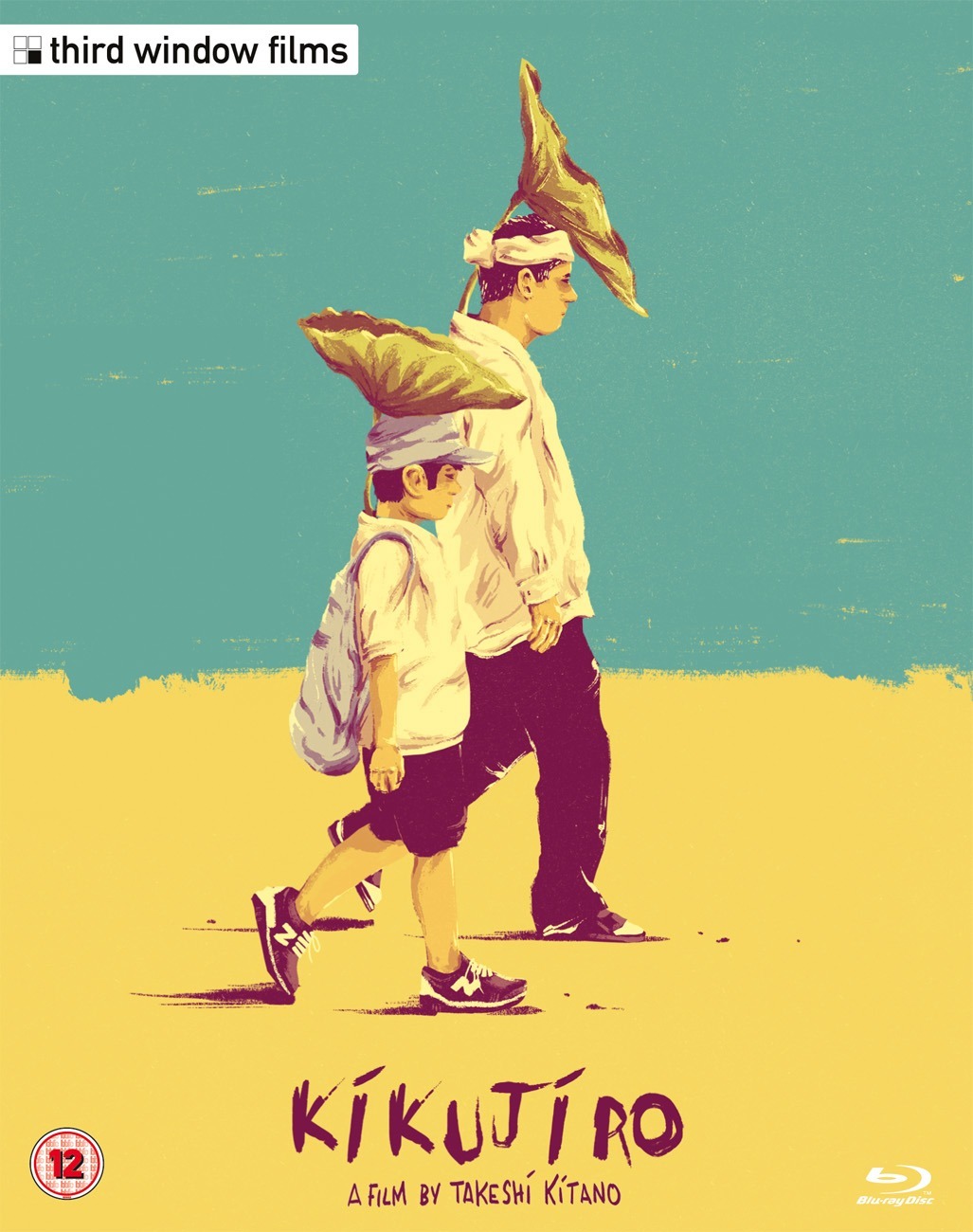 Kitano's Kikujiro is my favorite directorial effort of his, and by no small margin. This is a film that feeds the soul, nourishes the goodness in all of us, and reminds us that being a screw up or a loner isn't always bad. Our own Niels Matthijs summarized the film quite succinctly here:

The film follows a young boy, Masao, who sets out to find his mom. The boy lives together with his grandmother while his mom is providing for her family elsewhere in Japan. With all his friends leaving town for summer vacation, Masao is left alone and decides he needs a mission to brighten up his holidays. Right before he skips town though, he is spotted by two former neighbors. Unable to let Masao leave by himself on such a long trip, Kikujiro (Kitano) is sent to guide the boy in his quest to find his mom.

Kikujiro is somewhat of a scoundrel though, so the first few days they mostly hang out at the race track, trying to make some money. Slowly the two grow fond of each other and after some false starts they set out to complete Masao's mission. Once the two are finally on their way, the film truly blossoms and Kikujiro no Natsu becomes a relaxing and comical journey through the Japanese countryside.

Niels Matthijs continued his review and summarized my feelings beautifully several years ago when he included Kikujiro in his series of personal favorites:

Kikujiro no Natsu follows all the praise Kitano received for Hana-bi, a film that won him the Golden Lion in Venice (helped by the support of Tsukamoto) and immediately launched his international career. Even though Kitano dabbled in different genres prior to releasing Hana-bi ( A Scene At The Sea, Getting Any), to the West he was the director of gritty Yakuza films sporting an off-beat sense of humor. In return, Kitano (never shy to challenge a few misconceptions about his persona) decided to direct Kikujirno no Natsu, a warm and comical road-movie with some smart touches of drama.

Even though Kikujiro no Natsu is a beautiful and accomplished film, the first half hour starts off a little slow. Once the two are on their way, traversing the Japanese countryside, things get a lot better and after that the magic never settles. And even though the dramatic climax lies well before the film ends, the final half hour is easily my favorite part of the film, playing like an extended cut of the sea-side scenes in Sonatine. With little story left to tell, Kitano can focus completely on the laid-back atmosphere while his characters are camping out and thinking up silly games. The feel-good factor rises through the roof during these final 30 minutes.

Kitano's humor is simple, somewhat childish and often improvised, but thanks to the typical editing and his superb comical body language it works wonders. The dramatic climax is beautiful, the overarching atmosphere relaxing. And what truly lifts the entire film above itself is Hisaishi's superb soundtrack. Kikujiro no Natsu is a lovely little road movie that I can recommend wholeheartedly to everyone willing to have a try. It's not my favorite Kitano, but that's just because he's made so many good films to choose from.

Unlike Niels, this one is my favorite Kitano, and it's relentless positivity in the face of overwhelming odds easily the most obvious reason why. With Kikujiro, Kitano shrigged off the notion that perhaps he was a one note filmmaker. Even though Hana-bi is not exactly a family film, it does stray from his formula a bit, but still sticks on the fringes of the Yakuza oeuvre. In Kikujiro, we have a small time ne'er-do-well who may be a bad influence and subservient largely to his own desires, but he's a softy at heart, and not a gangster, even though he may want to become one.

With a colorful cast of confederates along for the ride and drafted to help lift young Masao's spirits, Kitano created a wonderland where the young boy can forget his cares and abandonment and embrace a new life free from regret. Like the Grinch, my heart grew three sizes by the end of Kikujiro, and the combination of Kitano's gentle touch with sensitive subject matter and Joe Hisaishi's remarkable score – one that rivals his best work for Ghibli – Kikujiro is a film that has to be seen to understand just how powerful it is. Astonishing.

Third Window's Blu-ray release comes from Office Kitano's HD remaster used for the Japanese Blu-ray disc and it looks and sounds great. The visuals are nthign flashy, but the clarity, depth of detail, and colors all pop more than you've ever seen. The real hero of this disc, though, quite like Hana-bi, is the HD upgrade of the iconic Joe Hisaishi score. Every time those first strains of “Summer” ring out, I go to my happy place, and they've never sounded better.

In terms of extras, Third Window only included one, but it is a doozy. We get the feature length behind the scenes documentary Jam Session , which is a fly-on-the-wall style doc that simply follows the creation of the film as it happens without external commentary or interviews. For some it will be bliss to simply watch the film be created by a master, for others it could become tedious without additional context. I'm definitely in the former camp and I cannot recommend this film and disc highly enough. 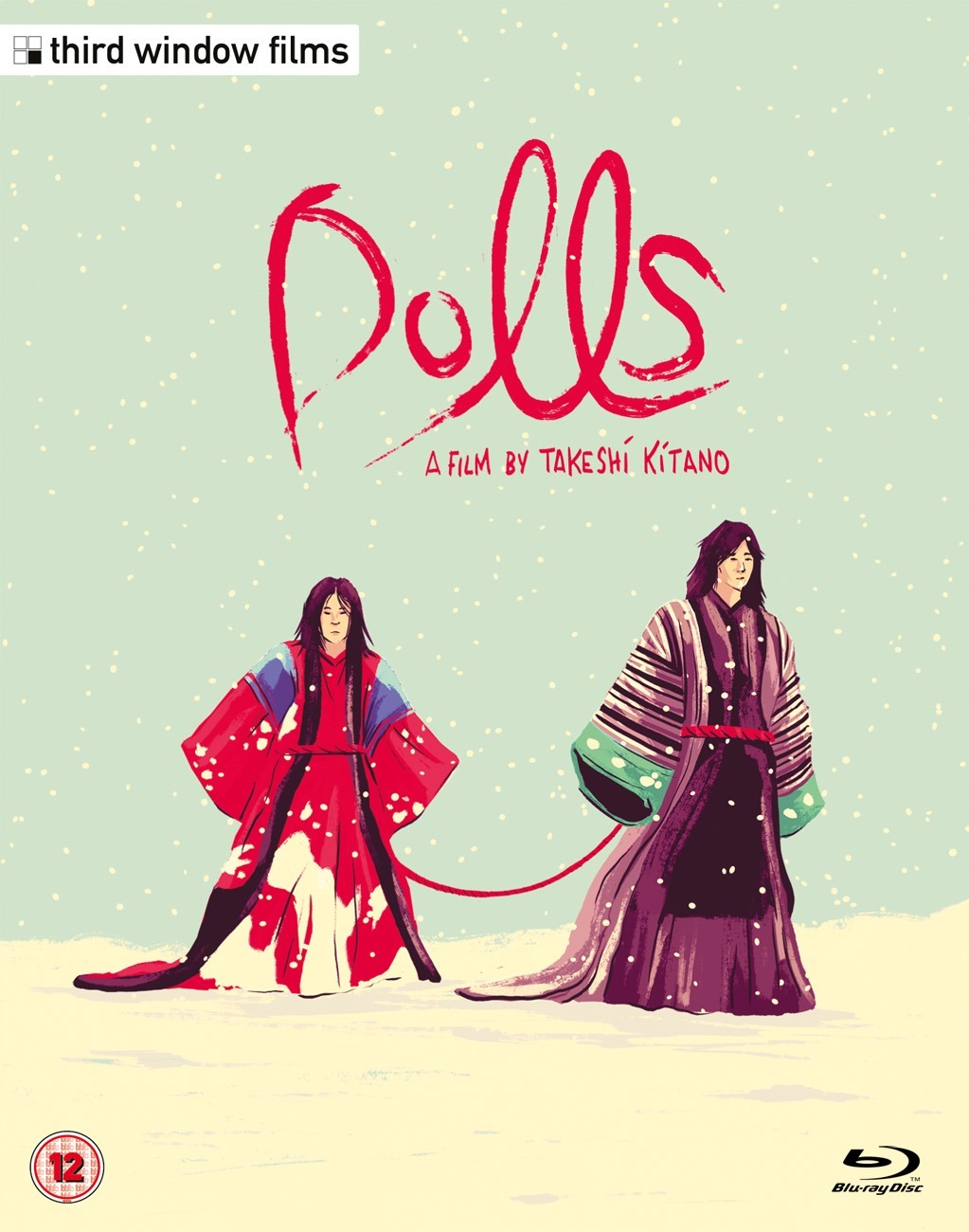 Also recently released by Third Window Films is Kitano's somewhat dense romantic drama Dolls. A terribly divisive film, perhaps the most divisive of Kitano's career, Dolls is also one of the most rewarding for a certain subset of viewers. Far from a traditional narrative in any sense, Dolls instead explores the nature of love and coupling and how it can both break and mend hearts in equal measure. A triptych of vaguely related stories unfolds at its own pace in Dolls, and each plays out largely without dialogue, though with no shortage of subtext. The result is an achingly romantic ode to love in all of its splendor and pain. Our lord and master Todd reviewed the film years ago when the film first released on DVD in North America and had this to say:

"Dolls" is a bittersweet, tragic film. Though we're given absolutely minimal information on the characters, the performances are so strong and subtle that you have no problem believing one hundred percent that these are real people on the screen. Their pain is palpable, as are the bursts of hope and joy that flash throughout. The pacing, though much slower than what North American audiences are used to, is absolutely perfect and the visuals are simply stunning.

There are two key elements that will decide whether you will be able to appreciate this film. The first is whether you are able to adapt yourself to the slower pace of the film’s world. I first caught this film when it played at the Toronto Film Festival in 2002 when my only exposure to Kitano’s films had been Sonatine and Fireworks, films which are still most people’s primary reference for the man. I knew that the film was significantly different from those works going in to it and was thus relatively prepared for what was coming and better able to appreciate it. For those looking for a Kitano point of reference, put the yakuza films out of mind and look to Kikujiro or, even more so, A Scene at the Sea.

The second key element is how you are able to handle the heightened theatricality of the film. Dolls is largely based on the traditions and style of Bunraku – traditional Japanese puppet theater – and thus the story follows a highly melodramatic path with some strong fantasy elements, far moreso than you might expect from a typical drama. It often amazes me how easily people are willing to suspend their disbelief to enter into another world when it involves things exploding but how they insist on, ahem, “realism” from their drama. This is a story built to highlight certain aspects of human behavior and human nature and it adheres to a set of rules designed with that aim in mind. Recognize that, and accept it, and be prepared for a work of genius. Refuse to accept that and you’ll still see some of the very finest cinematography of the past ten years.

High praise that I echo wholeheartedly. Dolls is definitely not for everyone, but for those who are unable to fall in line with its obtuse storytelling, there is a gorgeously shot film at the heart of all of the drama. For those who are able to watch with their emotions rather than a demand for conventional plot – a demand I find myself a victim of quite frequently – there is a deep and engaging love story here, beyond the surface levels we're shown.

While it is no Kikujiro or even a Hana-bi, Dolls is nevertheless a keeper and an essential part of Kitano's career. It is important to recognize the talent behind the gangster epics and operatic violence, because it helps the viewer to understand that there is always something behind all of the viscera, there is a heart, and never has it been more bare than in Dolls.

As I've come to expect with these Kitano releases, Third Window's release of Dolls is stellar. The HD master provided by Office Kitano is beautiful, and as we move closer to the present time in terms of Kitano's output, the films themselves look more and more beautiful. The audio is similarly high quality, even if Joe Hisaishi's score is not quite on par with his earlier efforts for Kitano.

In terms of extras we are given a lot of archival material, which is to be expected given the fact that Dolls was shot at the height of the DVD boom when bonus features were becoming a very crucial part of selling a film. A number of interviews with Kitano and his cast and crew are present, all with something to say about the production. Honestly, I didn't dig too deeply mostly because I enjoyed the feeling that Dolls left me with and didn't want to explain away the magic too much. Overall this is a fantastic presentation of one of Kitano's key works and Third Window deserves praise for continuing to release these films to a new audience who may have missed them the first time around.