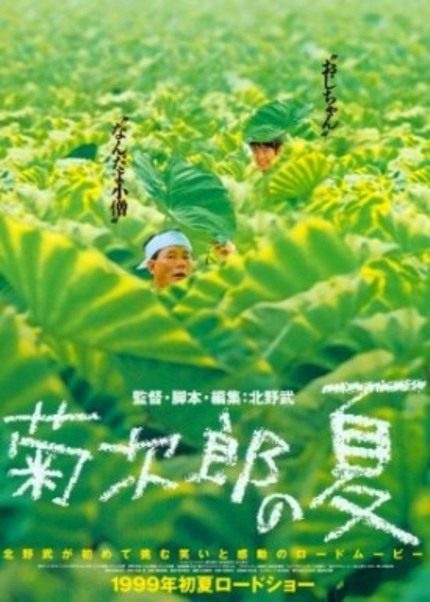 So far I've been ignoring the work of Takeshi Kitano (Achilles To Kame, Kantoku Banzai), but as I'm slowly revisiting my all-time favorite films there really is no way around Kitano's impressive body of work. So let us start with what is probably Kitano's most accessible film to date, Kikujiro no Natsu. A perfect cure for winter blues and the perfect entry film for people not acquainted with the signature style of Kitano.

Kikujiro no Natsu follows all the praise Kitano received for Hana-bi, a film that won him the Golden Lion in Venice (helped by the support of Tsukamoto) and immediately launched his international career. Even though Kitano dabbled in different genres prior to releasing Hana-bi (A Scene At The Sea, Getting Any), to the West he was the director of gritty Yakuza films sporting an off-beat sense of humor. In return, Kitano (never shy to challenge a few misconceptions about his persona) decided to direct Kikujirno no Natsu, a warm and comical road-movie with some smart touches of drama.

The film follows a young boy, Masao, who sets out to find his mom. The boy lives together with his grandmother while his mom is providing for her family elsewhere in Japan. With all his friends leaving town for summer vacation, Masao is left alone and decides he needs a mission to brighten up his holidays. Right before he skips town though, he is spotted by two former neighbors. Unable to let Masao leave by himself on such a long trip, Kikujiro (Kitano) is sent to guide the boy in his quest to find his mom.

Kikujiro is somewhat of a scoundrel though, so the first few days they mostly hang out at the race track, trying to make some money. Slowly the two grow fond of each other and after some false starts they set out to complete Masao's mission. Once the two are finally on their way, the film truly blossoms and Kikujiro no Natsu becomes a relaxing and comical journey through the Japanese countryside.

Through the years Kitano has been quite faithful to his visual style. Even though Kikujiro contains more bright colors compared to his earlier work (still miles away from the color explosions in Dolls but those are almost impossible to match), Kitano's style is mostly defined by the peculiar and sharp editing. Kitano loves cause and effect shots and draws much of his humor from them. Don't expect many smooth transitions between scenes, but harsh cuts that create a very interesting way of storytelling.

But Kikujiro no Natsu is not really defined by its visuals, rather by the sublime theme song Joe Hisaishi wrote for this film (Summer). You don't need anything more than the first two notes of the track to recognize the Kikujiro theme and it will instantly bring back all the beautiful memories related to this film. The rest of the soundtrack is great too, but still totally eclipsed by this wonderful returning theme. A true testament to the power and importance of a great soundtrack.

Even though this film follows Masao's trip, it's really Kitano's (Kikujiro's) film. Yusuke Sekiguchi is a cute-looking boy and plays his part well, but he is completely overshadowed by Kikujiro. Kitano is absolutely perfect in his role and plays one of the most enjoyable bay guys that ever graced the cinema screens (though he's not really a bad guy of course). Kikujiro is a forceful brute with his heart in the right place, add to that the characteristic face and walk of Kitano and you have pure chemistry. The rest of the supporting cast is great too, but they're really just there to make Kitano shine even brighter.

Even though Kikujiro no Natsu is a beautiful and accomplished film, the first half hour starts off a little slow. Once the two are on their way, traversing the Japanese countryside, things get a lot better and after that the magic never settles. And even though the dramatic climax lies well before the film ends, the final half hour is easily my favorite part of the film, playing like an extended cut of the sea-side scenes in Sonatine. With little story left to tell, Kitano can focus completely on the laid-back atmosphere while his characters are camping out and thinking up silly games. The feel-good factor rises through the roof during these final 30 minutes.

Kitano's humor is simple, somewhat childish and often improvised, but thanks to the typical editing and his superb comical body language it works wonders. The dramatic climax is beautiful, the overarching atmosphere relaxing. And what truly lifts the entire film above itself is Hisaishi's superb soundtrack. Kikujiro no Natsu is a lovely little road movie that I can recommend wholeheartedly to everyone willing to have a try. It's not my favorite Kitano, but that's just because he's made so many good films to choose from.

Do you feel this content is inappropriate or infringes upon your rights? Click here to report it, or see our DMCA policy.
Takeshi KitanoYusuke SekiguchiKayoko KishimotoThe Great GidayûDramaComedy