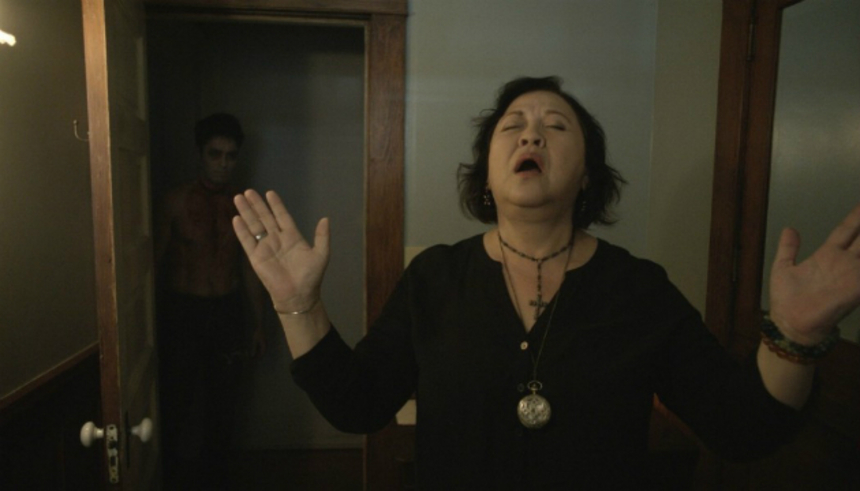 A woman sleeps alone at night. Her bed sheets begin to move, awakening her. Is she imagining things? Or is she under attack by a supernatural creature?

Quentin Lee's ambitiously unnerving The Unbidden refuses to play by the rules for scary movies, especially the ones that have been established since Wes Craven's Scream gave slasher flicks a jolt some 20 years ago. NaRhee Ahn's original screenplay sets up a world that is sincerely spooky, inhabited by characters who are not.

Lauren (Tamlyn Tomita) lives alone in a house that's big enough to harbor secrets. The morning after her restless night, she decides to get together with three longtime friends. It's the anniversary of something troubling to her and she feels the need to confront it, whatever it is.

Her friends Kat (Julia Nickson), Anna (Elizabeth Sung) and Rachel (Amy Hill) are a mixed lot. The years have taken a toll on their friendship, it seems, yet they are still ready to help each other out, even as they lightly bicker and banter. Rachel, for example, is a spirit practitioner, which the others mock. Even Lauren, the most empathetic of the four, is oddly discontent with her friends, and with Rachel, but allows Rachel to go forward with her plans for a seance.

Lauren is desperate, so she'll try anything. The seance leads to an extended flashback, in which we begin to get a sense of the friendship between the four women, played by Karin Anna Cheung, Akemi Look, Michelle Krusiec, and Kimberly Rose-Wolter. During the initial flashback, the tone of the movie changes. Rather than a spook-fest, it feels like a straight family drama, becoming more intimate and affecting.

From that point onward, The Unbidden then swings gently from drama to horror to something all its own, creating a texture and atmosphere that is never less than compelling and fascinating. What, exactly, is going on? Clearly, the movie is calling back to an older era of horror, one in which thrills and twists are less important than the unsteady relationship between the characters and their respective personal and shared histories, which often contain unexpected frights.

In some ways, The Unbidden is also a reflection of Quentin Lee's past feature films, drawing from the confrontational family drama of Ethan Mao, the puzzled, self-doubting relationships of The People I've Slept With, and the aching melodrama of White Frog, along with a strong dose of his graphic novel Campus Ghost Story (more about that one here). It's not accurate to say that The Unbidden mixes those elements together, necessarily, but it dips into them to conjure up its own combination of flavors. It's the strongest feature film by Lee so far.

Rough around the edges, The Unbidden remains creepy and penetrating whether it's exploring the supernatural or the dynamics of longtime friendship. To be frank, the latter is far more scary than the former.

More about The Unbidden