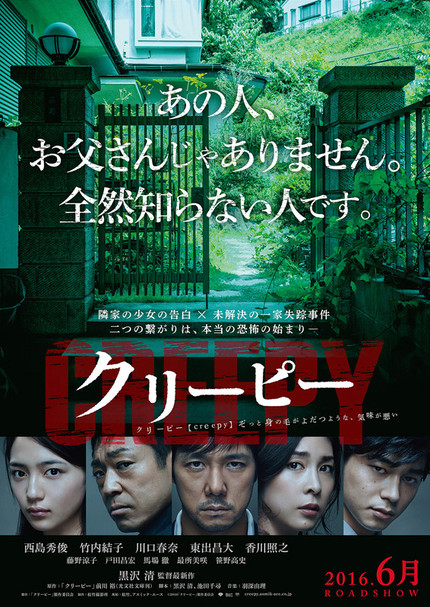 Kurosawa Kiyoshi does the marketers a favor with the title of his upcoming Creepy, a film that is, indeed, exactly what it promises on the tin.

Nishijima Hidetoshi stars as criminal psychologist Takakura who is investigating a family's disappearance from six years earlier. At the same time Takakura and his wife Yasuko (Takeuchi Yuko) have moved into a new house next door to friendly neighbor Nishino (Teruyuki Kagawa), his sick wife (Misaki Saisho) and teenage daughter (Ryoko Fujino). Things take a turn for the strange when the daughter, Mio, one day jumps into Takaura's house and states that the man she is living with is not her father but a complete stranger.

Following a previous teaser the full trailer has now arrived and while it's been a while since Kurosawa last delivered something truly at the top of his game this one does look quite promising. Take a look below.
Tweet Post Submit