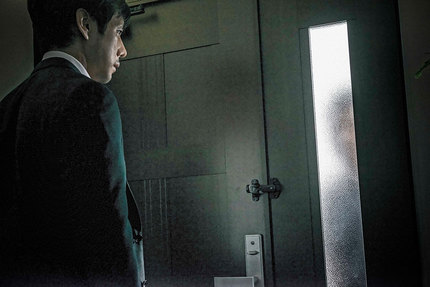 Creepy has been touted as Kiyoshi Kurosawa's "return" to horror, but it feels, in its own right, like a new departure for the director. Where vintage Kurosawa fare was vague, mysterious, and mournful, Creepy is bracing, black-humored, and overt. A serial killer yarn instead of a ghost story, Creepy is thinly reminiscent of Kurosawa's early masterpiece Cure, but without that film's opaque existentialism or impenetrable puzzles.

The film lays out its plot and choreographs its path toward the climax as if setting up chess pieces for a routine match. Former detective Takakura (Hidetoshi Nishijima) has just relocated to a new neighborhood with his wife, Yasuko (Yuko Takeuchi), and is working as a criminology professor. In classic cinematic fashion, he is pulled back into the fold to solve his one-last-crime -- regarding a family of three who disappeared, leaving behind their teenaged daughter. Takakura, though, approaches this news casually and Yasuko skews worried-wife tropes by hardly seeming to care much about this development. She is more concerned with their creepy neighbor, Nishino (Tokyo Sonata's Teruyuki Kagawa), who lacks a deft mastery of Japanese social niceties and norms.

It's no spoiler to say that Nishino is obviously the prime suspect in Takakura's re-opened case, given that he is off-putting, clearly embodies the titular adjective, and there's no other character that could conceivably fill the shoes without requiring the film to pull an ill-conceived twist. Some reviews have claimed that this outcome can be predicted a mile away, but I think that's missing the point. The identity of the killer isn't supposed to be a mystery. Not unlike in BBC's series The Fall, wherein the killer is revealed immediately, the suspense comes from waiting for our protagonists to realize what the audience already knows. Anyone who's seen Creepy's trailer should already have a handle on the film's mechanics. Borrowing pages from the villains of Cape Fear or Korea's I Saw the Devil, Nishino's guilt is never supposed to be in question.

This is not to say that Kurosawa's latest has no surprises up its sleeve. Nishino's inner sanctum houses several unexpected horrors, and there is real suspense in the responses of, and reactions by, Takakura and Yasuko. In lieu of ghosts or traditional folklore, Nishino's story relies on a conceit more (seemingly) sci-fi but no less mysterious. As with all of Kurosawa's offerings, Creepy is pristinely shot and scored. Kagawa's performance as Nishino is often charmingly neurotic, its unsettling nature far more human than most filmic monsters. He is frighteningly similar to those neighbors and acquaintances we've all had, and might like to forget.

Kurosawa's 'return to horror' ultimately is not a return to horror as he's defined it; rather it's an example of a master attempting a new direction -- in the form of a good, old-fashioned, bloody, spirited thriller. While I may still always prefer the haunted hallways and desolate Tokyo rooftops aching with visceral loneliness that mark classic Kurosawa, I won't deny that it feels good to see him having a bit of nasty fun.

Do you feel this content is inappropriate or infringes upon your rights? Click here to report it, or see our DMCA policy.
2016creepyHidetoshi Nishijimahorrorkiyoshi kurosawanyaffTeruyuki KagawaYuko Takeuchi