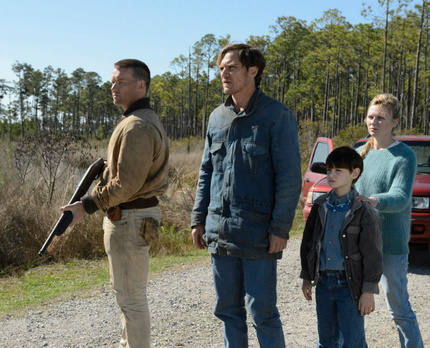 If there's one thing you've got to give to the American film and TV industry, it's that they're damn good at opening sequences, and Jeff Nichols' latest sci-fi thriller Midnight Special is no exception. Reuniting once again with frequent collaborator Michael Shannon, this writer-director's film features a cut-throat sharpness, and goes from 0-60 like a classic American muscle car.

Somewhat appropriately, Midnight Special opens darkly and with a certain elusiveness. Before we see anything, we hear a Texan home insurance infomercial playing over the opening credits, and with a remarkable succinctness this slips you into a sort of thigh-slapping, gun-touting Southern spirit of autonomy that floods the film and lingers there right up until the end. Moments later we enter a world of grubby motel chic, as we see two smouldering men bearing shotguns apparently preparing for some kind messy, epic show down.
The feeling of threatened secrecy they create is unmissable right from the get go, and our eyes helplessly fall on a peep hole cautiously covered up with repugnantly sticky gaffer tape. All the windows seem boarded up too, and you begin to assume the worse as the film slowly reveals that the two men have with them a small, frail-looking hostage. The channel changes, and a news announcement declares that two men have abducted a small boy who the authorities are as of yet refusing to name. Things begin to look bleak.
But doubts soon emerge as Shannon's character Roy starts to show an unexpected paternalism towards the sickly captive. Played by the remarkably talented Jaeden Lieberher, this boy is by no means what you might expect either. He bares those prominent, bright blue goggles that stand out so strikingly in the film's kooky poster; and having first been introduced as an avid reader of comics, it is almost as if the he has opted to don his very own kind of superhero costume in the face of the present adversity. 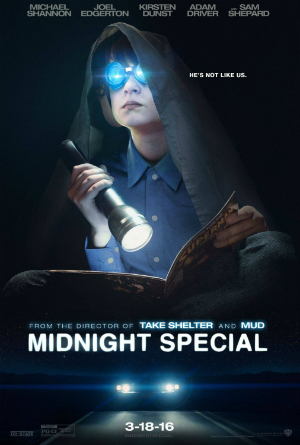 Almost atmospherically you assume the worst, but before you have any chance to confirm your fears, the men set off, bundling the boy into a beat-down Chevrolet. Moments later they barrel down an iconic American highway with nothing but vast, harsh Texan plains before them.
These remorseless car scenes, in which the film abounds, are very much Nichols' strongest, and Midnight Special is very much a petrol-soaked chase movie at its heart. That's because the sounds of heavily revved engines are never far from your ears and the film has this wonderful throbbing soundtrack, which would be not unlike that of Sicario if it weren't for the delicate looping piano hooks which regularly shifts the tone.
This shift in tone is important too, as the film actually turns out to be about the story of two men who are hell-bent on protecting their very special captive called Alton. Actually being Roy's son, this kid is a real sci-fi mix of the distutbing knowingness of Dakota Fanning in Steven Spielberg's Taken with the destructive force of Cyclops in X-Men. Only Alton's raging eyes are almost healing rather than destructive (a sort of in-built contradiction which the film carries with it throughout), and he almost manages to confer a healing spiritual experience to those who fall under his terrifying blue gaze.
This unusual spiritualism very much marks out the first layer of American values to undergo Jeff Nichols' alchemist touch in Midnight Special: Unmistakably Alton is part comic book hero, part second coming of Christ, and he is frequently greeted as such in the film. What's more, this layer of Christian allegory then folds out and draws under its umbrella this whole kind of unhinged, End-of-Days vibe that the film has, as we're introduced to a seemingly slightly Amish, isolationist cult who has adopted Alton as their cypher sent from God.
Except Alton isn't really interpreting messages from God. In fact, he's mostly picking up a combination of encrypted binary code and random radio waves that float through the air, unfortunately bringing the red-hot attention of everyone from the FBI to the NSA baring down on him and his father. Determined to escape both the government and this stifling cult, the boy and his two protectors break away in search of an the unknown End-of-Days type scenario to heal his ailing body.
And here we arrive at the second layer of American culture to fall under Nichols' scalpel: patriarchy. That's because Roy, and his bristling accomplice Lucas (Joel Edgerton) are very much manly men, and they very much do what men do, namely going around shooting sh*t with shotguns to save other stuff. And if that wasn't irksomely familiar enough, Nichols even gives us a few ham-fisted scenes where an unconventional family made up of Shannon, Lieberher and Kirsten Dunst huddle round to form a few suggestively iconic family circles/huddles whilst Edgerton gaumlessly gawps at them from the distance like a kind of imbecilic third wheel.
Though, as with all the hard-wired Texan cultural norms in this film, Nichols does also give Shannon's uneasy paternalism some pretty interesting twists, because Roy's sort of raging masculine crisis is frequently turned on its head by a number of role reversals with his seemingly omniscient son. And even if Dunst is sadly relegated to an almost meaningless supporting role in this film, Midnight Special's central family trio plus the odd Edgerton third wheel is pretty sturdy, consistently carrying this compelling film over the finishing line.
Adam Driver also delivers a commendable performance as the sort of oddball NSA operative who plays the pursuing Tom Hanks in this sci-fi Catch Me If You Can. What is unmistakably strange, however, is how consistently shocking the supporting actors and extras are in this film. They all seem to affect this sort of menacing swagger - which is called for by the script - but is unfortunately delivered in ways that are often ridiculous. So it probably has to be nul points for casting on this front.
Nevertheless, the parts of the film which are actually meant to be funny are frequently a success, and Nichols does somehow manage to scatter shards of laughter through his boisterous script in some pretty excellent ways. Ultimately, too, the film does deliver an interesting twist on Texan culture and it becomes quite a deep piece about being different (or rather the smartest person in the room) and also about being able to have have devout faith in something.
Also incredible it the film's frequent twilight cinematography which symbolically stretches throughout the film. Like a sort of metaphor for the plot's transcendentalism, the screen is quite often literally split in two across a horizontal axis. This creates a dark silhouetted world to which Roy, Lucas and Dunst are firmly confined and then suggests a bright, dawning realm to which only Alton can aspire. So Midnight Special is undeniably an interesting projection of the bright light that emanates from the uneasy American spirit, and it should be enjoyed by fans of sci-fi.

Review originally published during the Berlinale in February 2016. The film opens in select theaters in the U.S. on Friday, March 18, before rolling out across the country in the following weeks.

Do you feel this content is inappropriate or infringes upon your rights? Click here to report it, or see our DMCA policy.
Adam DriverJaeden LieberherJeff NicholsJoel Edgerton Kristen DunstMichael ShannonMidnight SpecialSam Shepherd