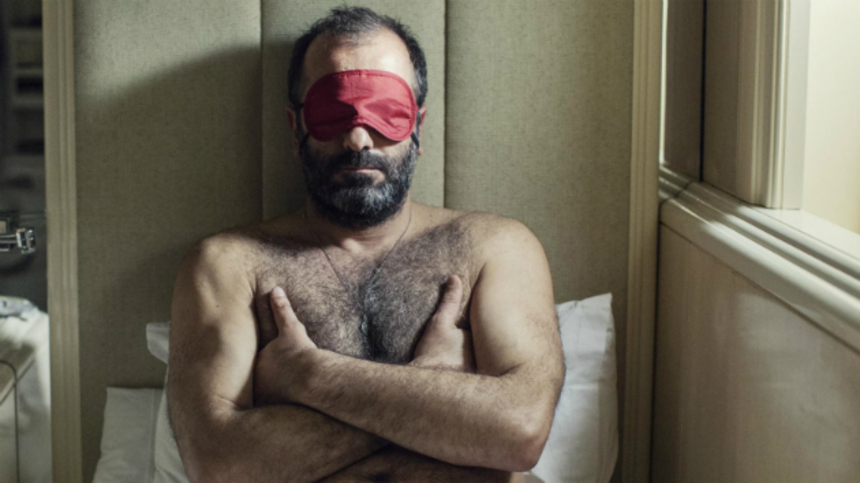 Greek director Athina Rachel Tsangari is seen as an important part of the current Greek "Weird Wave" of cinema. She produced several of Yorgos Lanthimos' films like Dogtooth, and he helped produce (and acted in) her previous film Attenberg. But there's something worth noting about that film: while Attenberg was unusual, it wasn't exactly "weird". It worked fine as a straight-faced drama, and though it contained some wry humor, it wasn't even all that absurd.

The holiday is a guys-only affair and takes place on the yacht of an old physician. On board are the man himself, some of his business partners, his son-in-law with a tag-along brother, his assistant who used to be a candidate for becoming a son-in-law...

It's a colorful, diverse group (though everybody is white and male), and they spend a few days roaming the sea between the islands, scuba diving... and because they're men, they compete in... well, everything, basically.

"Everything", however, gets used a lot more literally after a slight argument one evening, in which the point is contested that you cannot be the best in "everything". To put this to the test, the group starts a competition in "everything". Every member needs to device a test, and these will be the main events, but all other aspects are compared as well: how you sleep, how you snore, how you eat, how (and when) you talk. Everyone constantly keeps notes on everyone, about everything.

Like she did in Attenberg, Athina Rachel Tsangari puts enough normalcy between the silly shenanigans to keep events impressively rooted in reality. For all its male posturing, Chevalier also doesn't fall into the trap of becoming a mysandrist pamphlet, squaring off stupid men against cleverer women. She uses the male-only environment to emphasize the dynamics in a group where everybody is increasingly obsessed with The Game they're playing, and where there are no romantic developments or partners to mess up everyone's focus.

Chevalier doesn't really offer an epiphany, or show something you didn't already know. It is very well-acted, and often chuckle-worthy, and it does pose an amusingly distant view at how we all constantly compete with one another anyway, whether we're using a rulebook or not. But in itself, the film doesn't seem to be competing for anything, which adds a bit of a weird meta-flavor to it.

Review originally published during the Rotterdam International Film Festival in February 2016. The film will open in select New York theaters on Friday, May 27, and in Los Angeles on Friday, June 3, via Strand Releasing.
Tweet Post Submit