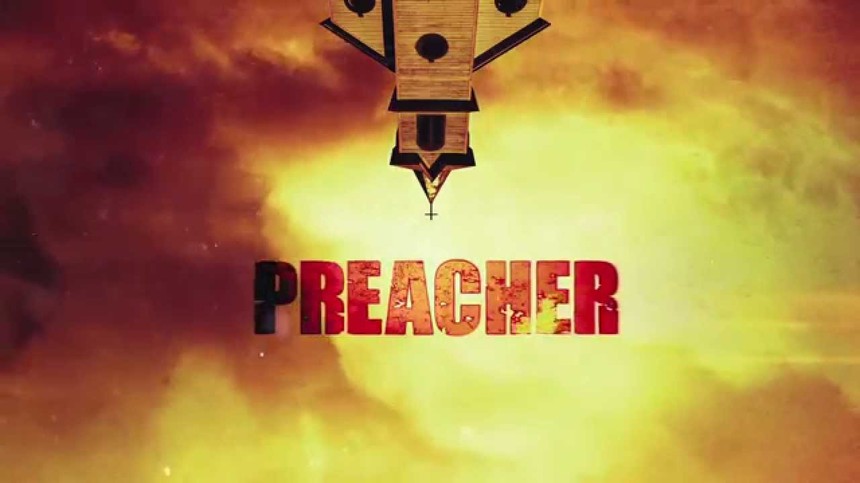 Superhero comics are no longer the only material from the realm of sequential art suitable for big or small screen adaption.

Terry Zwigoff shared that opinion back in the early aughts. In the latest fad, the small screen is becoming the new home for graphic novels. Shows like Lucifer or iZombie clearly demonstrated the hazards and limitations of page-to-screen transfer in an orthodox following of textbook TV series rules. Heavily diverging from the original structure and concept, the television adaptation of both titles resulted in formulaic crime serializations being stripped of their primary charm.

On the other hand, the AMC channel took a bolder stance to the graphic novel that paid off in The Walking Dead becoming a major pop culture phenomenon. After Robert Kirkman´s zombie soap opera, AMC dared to make an even more adventurous step in greenlighting the adaptation of a Vertigo property, a zany road trip saga about an attempt to hunt down God, Preacher.

A subject rich in outrageousness, Garth Ennis and Steve Dillon's cult classics for mature audiences drew upon the pandemonium of political incorrectness, sadomasochism, and blasphemous and cynical fun. To find and punish God is a madcap premise driving the roller-coaster of bizarre encounters and run-ins.

Another surprise AMC pulled out its sleeve were the names of the gentlemen trusted to develop the comics into a live-action adaptation: Seth Rogen, Evan Goldberg and Sam Catlin of Breaking Bad. Goldberg and Rogen demonstrated their potential and abilities on projects like Pineapple Express, This Is the End and The Interview outgrowing some of their previous labels and moving into new territories, of which Preacher is another testimony.

The story of a fairly insignificant Texas preacher questioning his faith takes a different shape under Sam Catlin's showrunning rule compared to its paper original. The time was ripe for the lead character -- chain-smoking, small-town, violent and hellbent preacher Jesse Custer -- to look his maker in the eye, in the wake of crazy carnage and perverted conspiracies.

The valiant and heroic protagonist in shining armor has gone extinct and the vacated spot has been seized a new type of protagonist. Certainly less valiant and no longer in shining armour, modern-day leading characters are flawed and morally or otherwise ambivalent, based on a prevailing duality, from the lot of Frank Miller's Sin City, through forensic technician by day and sadistic serial killer by night Dexter Morgan in Dexter, to meth-cooking Walter White in Breaking Bad, to the dark lord assisting in crime solving in Lucifer, to a brain-devouring zombie coroner's aide masquerading her unliving status in iZombie.

The embracing of contradictions within one character is even more vocal in Preacher, where the protagonist's crusade starts after he acquires a power known as “the Word of God,” which compelss a person to follow the commands of the preacher unconditionally. The reason why Custer holds the terrifying weapon is because he has become a host for the supernatural being called Genesis, a threatening product of a sexual union between devil and angel forcing the Almighty to leave his throne. Though Genesis is defined as something beyond good and bad moralilty, the main character is sketched through his duality and inner contradiction, even more explicitly in the television show, which makes Jesse Custer an unlikely and unorthodox Messiah.

Garth Ennis built his reputation on ultra-violent and cynical offerings as the tools of his satire, full of over-the-top hyperbolization and nihilistic and perverted ideas. AMC's version has not ventured in this direction yet and at this point, it is questionable which memorable moments or characters will ultimately make it on screen.

Showrunner Sam Catlin navigates the series in the course of realism, avoiding any sickening high jinks and depraved ideas. Preacher's saga uncoils as a grandiose road trip through America, although the first season seems to be based solely in small Texas town of Annville.

Jesse Custer, a criminal turn preacher stricken by a crisis of faith, is portrayed by doe-eyed Dominic Cooper. Wearing exquisitely upswept hair, he is trying to get his head around the secret power of his voice, while the dynamics between his two wingmen, badass ex-girlfriend Tulip O'Hare, played by Ruth Negga, and Irish vampire Cassidy, a role bestowed upon British actor Joe Gilgun, who received enough space in E4's Misfits series to be a bit of surprising casting choice for the show (except for his nationality).

The showrunner has explained that the first season is the most contained one and they intend to expand the story's universe over the course of next season beyond the small town. Serving as an introductory lesson into the television world of Preacher, the season's driving plotline is a conflict between Custer and Odin Quincannon, an Annville businessman running a meat-processing factory, whose unhealthy fixation to the sound of cattle slaughter is well depicted by Jackie Earle Haley.

Quincannon defected from the faith after an accident involving his family, which is probably the cause of his unpleasant state of mind. The main narrative arc seems to be the one lifted from the graphic novels, although at this point the protagonist tries to lead the inhabitants to God and make good deeds, albeit in a fairly unconventional manner. But as season one nears its end, the tipping point becomes Custer's disdain for God.

That seems to be imminent, and brings closer a grand American voyage to make Him take responsibility for his acts. The writers managed to introduce enigmatically even Preacher's main antagonist, known as the Saint of Killers, the Patron Saint of Murderers and Assassination, who chases Custer incessantly on God's command. However, they are stalling to conjure up Custer's imaginary friend or, maybe, it is just artistic license.

Compared to Ennis and Dillon´s nihilistic romp, AMC's Preacher remains tame compared to the comics. Yet the spiritual cord of dark humor and crazy ideas persists. The writers will more likely pursue different dramaturgy following the comics' central arc of Custer's hunt of the Almighty, the same modus applied on Walking Dead´s adaptation.

Even though Ennis employed and/or exploited overblown transgressive poetics for more than just reckless and demented, and occasionally cathartic, fun, after all, it is a satire. It would not click into the 'realistic' concept Preacher is currently unspooling in. The boundaries have not yet been clearly set, so it will be interesting to see how far the series will venture into the godless territory, bad taste, and blasphemous subversions of Christian dogmas found in the source material.

Rogen and Goldberg have already locked another Ennis property for Cinemax, Boys, where a rag-tag CIA group known as "the boys" watches the watchmen, so to speak, ensuring safety from corrupted superheroes. The duo will develop the material for the small screen along with Supernatural creator Eric Kripke. Needless to say, Boys is as decadent and cynical as Preacher. That leaves Ennis' very specific, meaning deranged, take on the zombie genre, Crossed, still free.

Do you feel this content is inappropriate or infringes upon your rights? Click here to report it, or see our DMCA policy.
AMCEvan GoldbergGarth EnnisPreacherSeth RogenTV