Critical Distance: The SHAMELESS Age Of Binging MAKING A MURDERER 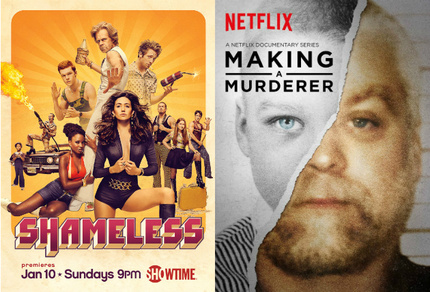 The first bare breasts appear early in the new season of Shameless. The first few episodes of Making a Murderer feature little more than a tease of possible dramatic impact to come.

With its bounty of breasts, buttocks and broken bones, Shameless is a show that was clearly designed in the post-Sopranos episodic era of premium cable television. In contrast, the slowly-developing, drawn-out documentary series Making a Murderer is a show that feels custom-fit for the Age of Binging.

For all intents and purposes, House of Cards kicked off a new era with its debut nearly three years ago. Even though the first 13 episodes were not initially designed to be made available all at once, the series became a compelling watch on its own merits, encouraging the biggest sea change for television since Hill Street Blues in 1981, when the idea of a continuing narrative, played out over multiple episodes or even an entire season, first took hold.

Nowadays, it's become the norm to expect multiple episodes of a streaming series to debut all at once, to the point that the recent documentary series Making a Murderer has gained far more notice that it might have as a weekly show. The cumulative effect is far greater, in that instance, than it would be if it were consumed individually.

Like House of Cards, also made for Netflix, Making a Murderer was not designed specifically for binging multiple episodes in a single sitting. But the expectation of greater suspense or a bigger pay-off drives compulsive viewing. Or maybe that was just me; it reminded me of days spent watching a case on the cable channel Court TV, waiting and waiting and waiting for something dramatic or unexpected to happen. Making a Murderer exposes its point of view early -- 'hey, it looks like an injustice is being committed' -- and then settles into a depressing, dispiriting treatise on the U.S. judicial system. It's film noir performed by amateurs who don't realize, or refuse to accept, that powerful forces are working against them. Taken as a whole, it's bitter and extremely frustrating, captured in excruciating detail by filmmakers Laura Ricciardi and Moira Demos over a period of years.

It's very tempting to suggest that the series would have worked better if it was condensed to feature length. Indeed, entire episodes pass by that made me wonder why they were included; the series quickly begins to feel repetitive. But what initially feels like a weakness becomes the show's greatest strength; it's anti-dramatic nature forces one to confront the difficulty of finding true justice in real life, even for a crime as heinous as murder. And if the accused are not, in the end, guilty, then what of the truly guilty killer(s), walking free for years and years?

Since House of Cards, Netflix has been eager to replicate its success, yet like other streaming services it remains more conservative in content than its premium cable competitors. Oh, shows on Netflix, Amazon, Hulu and the like still feature profanity and sexual situations, but they don't appear to revel in it to the same extent as those on HBO, Showtime, Cinemax, Starz and others.

Set to debut its sixth season on Sunday, January 10, Shameless is a good example of a show that distinguishes itself from its broadcast television cousins almost entirely because of its profanity and sexual situations. Adapted from a British show that aired on Channel 4 from 2004 to 2013, Shameless stars William H. Macy as Frank Gallagher, the alcoholic father of a brood of children in Chicago. Unlike the original, which soon veered beyond the family, the American show has resolutely explored the Gallaghers and their friends and lovers.

John Wells developed the show and continues to be involved as executive producer; he also usually writes the initial and concluding episodes for each season, thereby setting the tone and wrapping things up. The focus is on the characters, without much more than occasional disregard for race, religion, or politics. Everyone is so busy with surviving day to day that there's little time for thinking about long-term plans or consequences of any kind.

Parents Frank and Monica never should have become parents; Frank has no regard or interest in anyone but himself, and Monica refused treatment for her bi-polar condition and split long ago. Frank remains on the scene, and is an ugly, despicable, and obnoxious person; it's only Macy's improbably generous spirit that makes him watchable, though I can't figure out how an alcoholic of long standing still finds time to go to the gym and remain physically fit. Responsible daughter Fiona (Emmy Rossum) also remains physically fit, which is understandable in her case because she has run the household since the age of 15 and is currently working as a waitress. Her current romantic beau is her coffee shop boss, Sean (Dermot Mulroney, dependably charming as usual), who offers her the job of assistant manager. Fiona began the series entangled with a serious boyfriend for several seasons before moving on to a relationship with another boss, which did not work out, and eventually married a musician on the spur of the moment, which didn't work out last season.

So, yes, the sixth season is already showing signs that it's treading old ground. Oldest son Lip (Jeremy Allen White), the highly intelligent family member, is in college and spending serious bed time with one of his professors; another professor suggests yet another new career path for him. Next oldest son Ian (Cameron Monaghan), who is gay and now suffers from bi-polar, is once again struggling and suffering; he's broken up, probably with his boyfriend Mickey (Noel Fisher), who is now in prison. Debbie (Emma Kenney), in her early teens, is happily pregnant. Similar-aged Carl (Ethan Cutkosky), who was sent away to juvenile detention, is back home and happily ensconced in a life of crime. Friends of the family Kevin (Steve Howey) and Veronica (Shanola Hampton) are sure to get involved in shady business that is (mostly) comic relief.

After not watching the show for years, I caught up recently in reverse order with Season 5, then Season 4, then Season 3. It's a typical family drama, rarely as smart or perceptive as it thinks it is, and its refusal to engage with social issues on anything more than a surface level keeps it from being an essential watch. I binged on 36 episodes, though, and that's far more than I intended, which speaks mostly to the power of the performances.

I may not wish to binge on it anymore, yet Shameless remains entertaining. I'll keep watching for the continual pas de deux that is performed by Macy and Rossum, the former an unapologetic wreck, the latter an improbably smiling bulwark against all that is dark in the world, at least for 60 minutes at a time.

Shameless airs on Showtime. The first episode of season 6 is available to watch for free for a limited time, ahead of its official debut on January 10. Making a Murderer is available via Netflix. Critical Distance is a bi-weekly column, written by managing editor Peter Martin.

Shameless is an awesome show. I like how it never loses pace. There's always craziness of some kind in the Gallagher house.

Agree. They definitely keep juggling all the characters well.