Critical Distance: Michael Bay's Military Might Is Not So Strong After All 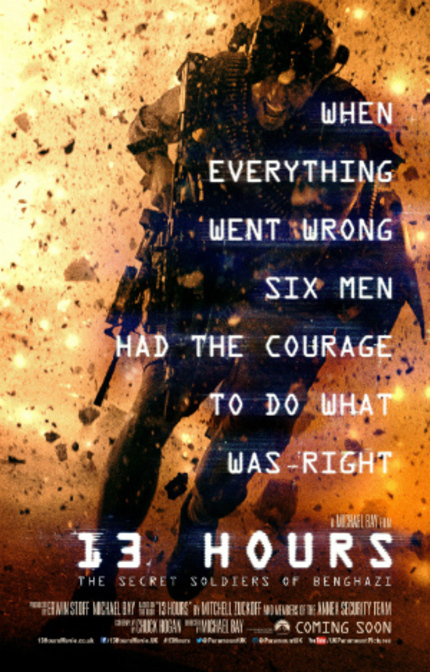 Sooner or later, Michael Bay will die. How will he be remembered?

The filmmaker, soon to turn 51 years of age, will undoubtedly be honored as one of the greatest moneymakers in modern Hollywood history. The 12 movies he has directed so far have earned more than $5.7 billion at the box office worldwide. Much of that income is tied directly to the Transformers series; he is already working on the fifth installment.

Bay will not likely be remembered for his newest effort, 13 Hours: The Secret Soldiers of Benghazi, which is something of an embarrassment because it plays like an honest tribute to the military contractors who defended civilian CIA personnel at the secret base in Benghazi, Libya where whey were stationed and also sought to rescue the U.S. Ambassador and others at a compound nearby.

To be fair, the screenplay was adapted by Chuck Hogan from a nonfiction book by Mitchell Zuckoff, who collaborated with the contractors. Those contractors, who prefer to be known as operators, were all military veterans who were paid good money to protect the CIA personnel, yet went beyond the call of duty when the attacks rained down without warning.

The movie sets up the attack with a lengthy series of scenes that establish the attitude of the contractors. As they acknowledge, they are solely concerned with doing their job; they are not interested in the politics of the volatile situation nor in getting to know the locals. That would distract them from what they have been hired to do: protect and serve, nothing more and nothing less.

Their attitude allows Bay to keep his focus relentlessly narrow. Obviously, taking into account the politics or the local citizens would be a distraction from the eventual boom! and bang! and bam! and wow! that Bay enjoys depicting on screen. There may not be giant robots rampaging through cities, but there are dozens of anonymous Libyans to be killed in the name of freedom and liberty.

The military contractors are, of course, above reproach throughout, while the civilian CIA personnel rudely tolerate their presence until, of course, they realize they will need those guys after all. Now it may be that the military contractors were the only six men in Benghazi who were truly brave and that they never spoke an ill word toward anyone, and that the CIA personnel were pretty much spitting on them until their lives were on the line, and that all the Libyan men were pretty much all untrustworthy, except maybe one.

Maybe that's all true, or maybe Bay found another vehicle he could drive at full speed without having to slow down and think about the questions he was raising.

This was all very amusing when Bay burst upon the film scene in 1995 from the world of music videos and commercials. Bad Boys was an entertaining, energetic cop drama that teamed up Martin Lawrence with rising star Will Smith. It was refreshing to see a 'buddy cop' movie with two African-Americans in the lead roles and off its relatively modest budget it performed quite well at the box office.

Bay moved on to The Rock, still the best movie he's made, a terrific thriller that benefited from its furious pace and the presence of Sean Connery opposite Nicolas Cage. The deep supporting cast, including Ed Harris as the leader of a rogue military outfit, definitely enhanced the often ridiculously overblown action.

From there, however, Bay's thematic reach stretched far beyond his narrative abilities. Armageddon and Pearl Harbor aimed for grandiosity but instead sank into pomposity, a fate that Bad Boys II managed to avoid with a self-aware, self-mocking sense of humor. The Island had a decent premise and featured terrific production design for its futuristic world, but wound things up with no satisfying destination in mind.

From there, Bay plunged into one Transformers movie after another, the kind of experiences that should awe, inspire and delight, but instead bore and punish. Bay's sensibilities are well-tuned to that sort of cinema, so that even when he tried to go small-scale with Pain and Gain, he couldn't avoid hammering the eyeballs with a relentless flurry of activity and nonsense.

When I saw 13 Hours this past Friday afternoon, I was quite surprised that there were only 10-12 other people at the screening. But it seems likely that the subject matter kept audiences away, as the film only made a relatively small amount of money at the box office over the weekend. That may keep Bay making Transformers movies for the remainder of his career. After all, if even Michael Bay can't get people to see brutalizing military movies, where else can he apply his skills?

13 Hours is now playing in theaters throughout North America. Critical Distance is a column by managing editor Peter Martin.

More about Pain And Gain

More about Transformers: Age of Extinction