Destroy All Monsters: The Power Of THE FORCE AWAKENS 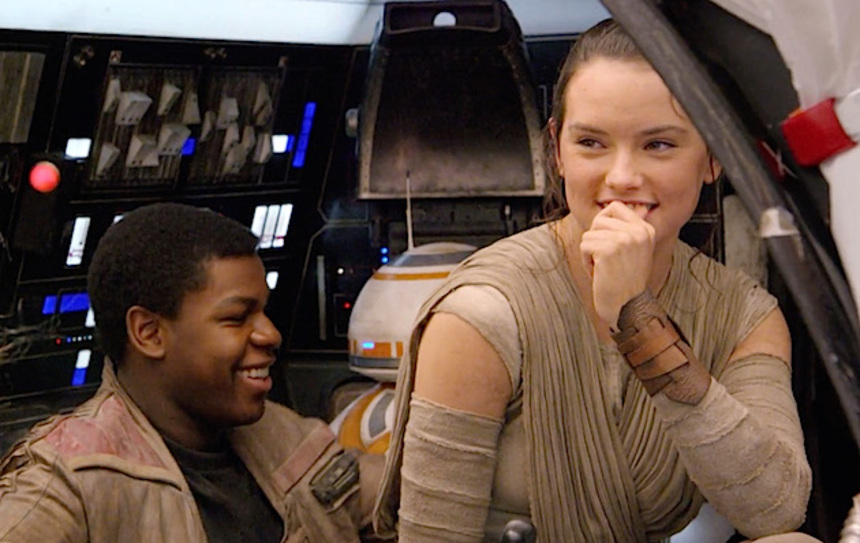 Sure, within moments of the wider pop cultural world becoming aware of the fact that Rey (Daisy Ridley) wasn't just the main character of Star Wars: The Force Awakens, but was indeed that kind of main character - the Luke, for lack of a better word - the pundits began weighing in on whether or not Rey's status as the best thing to happen to the Star Wars franchise since... uh... ever?... was appropriate.

The reaction - is Rey a Mary Sue, and if she is, does that make her invalid as this film's particular slice of awesome? - was dully, ploddingly predictable. As my friend Sasha James so elegantly put it, when a Gary Stu shows up, we hardly bat an eyelash.

Harry Potter's the biggest Mary Sue to ever Mary Sue, and we don't give him shit. Gifts fucking drop out of the sky while he's at breakfast.

It's easy, particularly in a week when a whole bunch of other bigots lost their collective shit because a woman of colour was cast as Hermione Granger in a Harry Potter stage production in London, to ascribe the problem to simple sexism. And certainly, Sasha's point is entirely accurate: if Rey were Ray, we wouldn't be having this conversation, except perhaps as a tangential swipe against J.J. Abrams for being too much of a geek, or six months down the line as an example of how The Force Awakens' script was a bit over-the-top.

(He is, and it is; and I gotta tell you, this week? I don't give a single fuck. The Force Awakens is terrific, in ways I never could have expected. Rey's one of them.)

But because Rey's a girl, and a deft mechanic, and a great pilot, and strong enough in the Force that she sorts out how to do the Jedi Mind Trick all on her own, we must question whether she's too much of a convenient good thing.

A Mary Sue is an audience-identification character taken to an unlikely extreme, wherein she/he emerges from obscurity with world-saving extraordinary abilities that put the rest of the cosmology - the established heroes, like Han Solo and Chewbacca - squarely in her/his debt. This is where the wish fulfillment aspect comes from: what if you were thrown into the Star Wars universe... and you turned out to not just be adequate, but crucially, enviably special?

Rey ticks all the boxes. But I would suggest that it's because she's supposed to.

Many people have responded to The Force Awakens by noting its structural similarities to the original Star Wars. This isn't accidental, of course; even on the most pragmatic level, Abrams and his team had to deliver a roundly nostalgic reboot of the Star Wars universe (if not the actual narrative continuity) by providing something that reminded as many people as possible of not just Star Wars in general, but Star Wars (the movie, which no, I will never refer to as "A New Hope") specifically.

But this structural mirroring has allowed The Force Awakens to be something that none of these episodes since the original Star Wars has been: a power fantasy for young people.

People will line up for weeks to tell me what's wrong with the prequel trilogy, but on this rarely-discussed aspect I think we can all agree: did anyone ever want to be Anakin? Did Anakin's journey ever seem like something we'd want to happen to us? (The Force Awakens even takes a subtle jab at Jedi indoctrination. The First Order's stormtroopers, like the prequel trilogy's Jedi, are taken from their families at a young age and raised to do exactly one thing. Fascist cult much?)

Anakin doesn't entirely count anyway, thanks to the order in which Lucas made these films; we already know he's different/special/The Chosen One, and that he's going to become Darth Vader, so any tension on that point is moot before the story begins. Empire and Jedi weren't particularly allowed to be power fantasies either, except as extensions of the first film. Luke goes through his growing pains in Empire and his maturation stage in Jedi.

But Star Wars, and now The Force Awakens, are the only two movies in the canon where the lead character is plucked from obscurity by coincidence and circumstance, and goes on to win the day by an equal combination of their talents, willingness to learn, and a keen interest in finding out who they are.

Only this time - and this is really, truly, I swear to you, very important - it's a girl.

It's a girl and, in support of her, a man of colour, and they are the ones who, this time, find that magic combination of pluck and skill that gets you from one end of a Star Wars adventure to the other.

They aren't princesses, knights, or politicians; they aren't even smugglers or officers. They're nobodies from nowhere, and the Force (within the story), and the Star Wars franchise (out here in the real world), reaches out a hand to them, and by extension, everyone like them, and says, you have that power too.

It's no coincidence that that particular piece of Luke's dialogue from Return of the Jedi was repurposed (slightly) to serve as the narration for the second trailer for The Force Awakens. It's no coincidence, either, that not once but twice in this movie, our young heroes get to fly a "classic" Star Wars spaceship - the TIE Fighter and then, even better, the Millennium Falcon, just like all of us have dreamed of doing since we were embarrassingly young.

It's no coincidence that both Rey and Finn survive the climax by brandishing the same lightsabre that Obi-Wan handed Luke in the original Star Wars; and it is very, very, very important that when the moment of truth comes and all seems lost, it's that girl, who is very ordinary and very special at the same time, who Force-pulls the lightsabre into her hand to finish the fight with Kylo Ren.

Power fantasies are not about plausibility. They are about that line - very ordinary and very special at the same time - and, by extension, the incredibly important idea that anyone, anywhere, might have the magic inside them that lets them be the hero.

And if you truly insist that your power fantasy character fit into those classic, person-with-a-penis-and-white-skin tropes? Hey! The Force Awakens has you covered, and uses that character to underline its point: Kylo Ren is a delirious caricature of fanboy entitlement run amuck, a super-powered (he can stop laser bolts with his mind!!), pasty-faced brat who's so out of touch with reality that he's built himself a Home Depot Darth Vader mask that he doesn't actually need, so that he can wear it to feel like a badass whenever he's not busy talking to the charred remains of Darth Vader's actual mask.

To take it back to Harry Potter for a sec, Kylo and his DIY mask are like the out-of-touch Slytherin fans who have the Dark Mark tattooed on themselves, because I dunno, getting a swastika tattoo was the wrong colour or something. Kylo Ren is everything that's gone wrong with the universe in the 30 years since Return of the Jedi - and the fact that he so closely resembles the exact sort of sod who seems have a problem with Rey today isn't, I think, much of a coincidence.

Rey and Finn are what make this movie fun, and what they say to the young people who will follow in their swashbuckling footsteps is what makes this movie great.

And if Rey turns out to be Luke's daughter, or Chewbacca's cousin, or a robot built by those four other robots from Ody Mandrell's pit droid crew, it won't really matter. The generative power of the story will remain the same: it could be you, girl. You already have more power than you know.