Learning From The Masters Of Cinema: Cornel Wilde's THE NAKED PREY 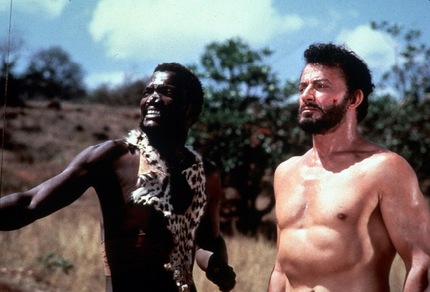 Celebrating its 50th anniversary this year, The Naked Prey remains the only film directed by Cornel Wilde to be widely available, a situation that based on this example, is a lamentable state of affairs indeed.
An incredibly physical actor, who was at least as proficient an athlete, Wilde found himself regularly typecast in classically heroic roles after moving to Hollywood. He had been offered a place on the US Olympic fencing team in 1936, but turned it down to pursue his acting career. In 1940, Wilde played Tybalt in Laurence Olivier's New York stage production of Romeo & Juliet, for which he also choreographed the sword fights.
Then in 1945 he was cast as composer Frederic Chopin opposite his acting hero Paul Muni in Charles Vidor's A Song to Remember. While Muni treated Wilde appallingly, his industry peers were more receptive, and his performance was honoured with an Academy Award nomination for Best Actor. (He lost out to Ray Milland in The Lost Weekend - also available from Masters of Cinema). Wilde's other Hollywood career highlight was as trapeze artist The Great Sebastian in Cecil B DeMille's Oscar winning The Greatest Show on Earth, for which he performed a number of his own aerial stunts.
However, when substantial or challenging roles dried up, Wilde set out to produce and direct his own feature films, creating roles for himself that he felt were better suited to his more versatile talents.
After a clutch of films including heist thriller Storm Fear (1955), racing drama The Devil's Hairpin (1957) and medieval adventure Lancelot and Guinevere (1963), Wilde set his sights on adapting Addison Irwin Sheldon's story, John Colter's Escape. Colter was an accomplished trapper in Wyoming in the early 1800s, whose party was attacked and slaughtered by ferocious Blackfoot Indians. Colter, however, was set free, in order for the Blackfoots to track and kill him for sport.
The Naked Prey transplants Colter's story to the plains of South Africa, with the hero reimagined as a hunter and ivory trader who is forced to flee from local tribesmen after another member of his party offends them. Shot largely on location in Rhodesia (now Zimbabwe), the film has virtually no dialogue whatsoever, with Wilde's character credited only as "Man".
The majority of the film's run-time pits our protagonist against the elements of the African plains, as he must contest with the heat, barren conditions and a foreign land teeming with hostile creatures, all while fleeing from the hunters tracking his every step. Wilde was 52 years old at the time of filming, but still looks every bit a prize human specimen in a physical condition that would put many men half his age to shame. That said, Wilde became ill a number of times during filming, which compromised many of the film's more ambitious sequences. Wilde intended to share the frame with as many indigenous creatures as possible, but his failing health meant they were unable to get a number of crucial shots. As a result, The Naked Prey is a curious melange of location photography, pick-ups shot back in the US and stock footage of elephants, lions, snakes and other such creatures. Nevertheless, Wilde uses every opportunity to juxtapose his tale of human savagery with the dog eat dog nature of God's creatures.
The Naked Prey's simple story of survival, and specifically of humans hunting humans, has been addressed in cinema many times, from Sam Fuller's Run of the Arrow and John Woo's Hard Target to Mel Gibson's Apocalypto. The most striking comparison, however, is to Irving Pichel and Ernest Shoedsack's classic The Most Dangerous Game. There is also some similarity to Shoedsack's next film, King Kong, which itself aped the documentary-style jungle adventures popular at the time, which edited actors and a narrative into nature footage shot in just this kind of exotic location.
Beyond its stunning photography, wonderful tribal score and committed central performance, The Naked Prey ruffled plenty of feathers when first released for some shockingly violent imagery in its opening minutes. After offending the tribe, the entire hunting party is caught and massacred in a number of horrific ways. While the man who insulted the tribe leader is tied down and set upon by poisonous snakes, another is smothered in clay and baked over an open fire. While perhaps Wilde hoped to shed light on fascinating methods of execution he had heard about, there is an undeniable air of exploitation to these scenes, foreshadowing the barbaric slaughter seen in such films as Ruggero Deodato's Cannibal Holocaust 15 years later.
What is most surprising perhaps, is that The Naked Prey never feels racist or ill-judged in its portrayal of Africa and its inhabitants. Wilde's "Man" is clearly shown to be sympathetic and understanding of the local tribes, even able to speak the language, while his companions are vulgar and disrespectful, even expressing a desire to capitalise on the slave trade just moments before being massacred.
The hunting party that pursues Wilde, rather than being a mob of faceless savages, is given plenty of screen time to establish their individuality and display a wide range of emotions. They grieve the deaths of their members, appear bored and tired of their mission, while at other times goof off and enjoy themselves as anyone else would on a long cross-country journey. While the rest of the narrative is stripped down to its barest of essentials - to the extent that scenes of Man and his wife were excised completely - perhaps it is for these balanced representations that earned The Naked Prey an Academy Award nomination for Best Screenplay.
While never quite reaching the heights of actors-turned-auteurs like Orson Welles or John Cassavetes, Cornel Wilde nevertheless had a vision to create something for himself and his audience that he felt the studio system was failing to produce. Those who did work for Wilde speak of him as a ferociously hardworking filmmaker who set an almost unattainable example that he insisted his collaborators strive for. The results of those labours are immediately evident in The Naked Prey - an exhilarating, unusual and unashamedly entertaining film that shoots for something more profound that perhaps it never quite achieves, but succeeds in being much more than simply another Man Against Nature adventure.
Arriving on dual format Blu-ray and DVD courtesy of Eureka! Entertainment's Masters of Cinema series, The Naked Prey looks quite astounding in a new 1080p presentation. While there is some fluctuation in image quality, between that shot by cinematographer H.A.R. Thomson and the integrated wildlife footage, every effort has been made to minimise any disparity between the two. In addition to the film's original theatrical trailer, the release also includes a fascinating video essay from film historian Sheldon Hall, author of Zulu: With Some Guts Behind It, which provides a potted biography of Cornel Wilde, his career and struggles to get the film made. The enclosed booklet features an archival interview with Wilde as well as Addison Irwin Sheldon's short story, upon which the film is based.
Sign-In to Vote
Tweet 0 Submit

I love this movie. My father showed it to me as a young child and it always stayed with me, so I tracked it down on dvd several years ago. I'm excited to see it on bluray.

Thank you I had forgotten this film as I was very young when I saw it.
Hope I'm in half as good shape as Cornell Wilde when I get to 52.