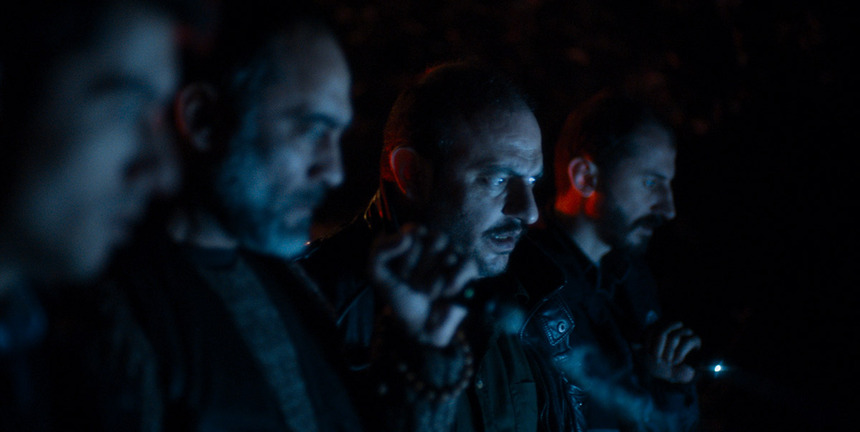 Turkish helmer Can Evrenol feels very much like one of our own here at ScreenAnarchy. We've been covering his work since back in 2009 when he first came to our attention with his sophomore short film The Chest, and we've kept a close eye on him ever since. Evrenol's work has a primal intensity to it, something deeply visceral and unsettling, and it's about to be exposed to the world at large with his debut feature film Baskin - an expansion of his recent short of the same name - about to premiere in the Midnight Madness section of the Toronto International Film Festival.

What should be a routine night on patrol becomes a trip into the darkness of the mind and soul for a squad of unsuspecting cops in this tour-de-force feature debut from the ferociously talented director Can Evrenol. Based on Evrenol's terrifying 2013 short of the same name, and drawing upon a diverse range of inspirations -- not only such films as Quest for Fire, Apocalypse Now, and Hellraiser but also the paintings of Caravaggio, Bosch, and Giger -- Baskin offers up a nightmarish compendium of imaginative frights that will leave even seasoned horror-movie fans reeling.

Responding to an emergency call for backup, the squad arrives at an old building to find an abandoned patrol car and no sign of their comrades. Entering the building and making their way to the basement, the officers catch glimpses of grotesque and unnerving images in the shadows. Soon it becomes apparent that they have stumbled into the middle of a ritual celebrating the black arts -- a celebration where they may be the unwitting guests of honour. What began as a detour into the Twilight Zone becomes a shortcut to Hell.

Tense and terrifying, Baskin will invade your dream space with its unforgettable images and the unimaginable monstrosities lurking just outside your range of vision.

That up there is how TIFF describes the film but why take their word for it when you can experience it for yourself? The first trailer for the film arrived online yesterday and, yeah, it's everything we've come to expect from Evrenol plus a whole lot more. Check it out below.

[Full disclosure: I'm also an EP on Baskin and have been involved with it from the early days. So, yes, I'm biased as all hell.]