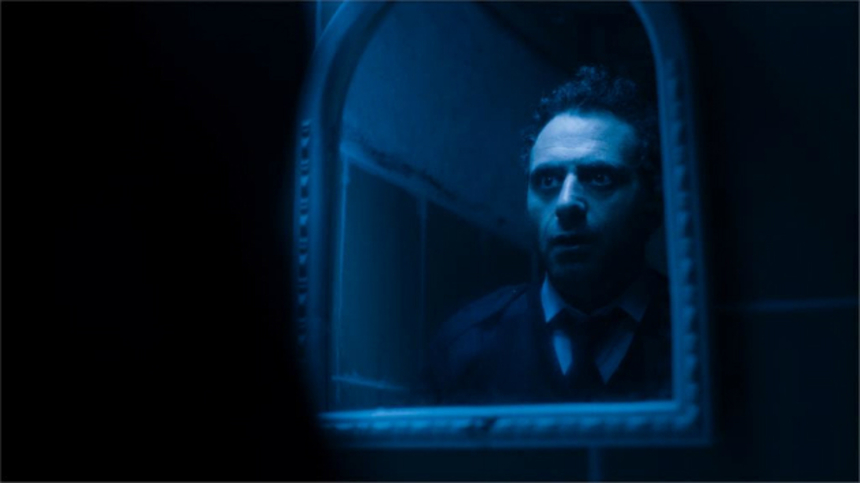 When many people think of contemporary Turkish cinema, the first thing that comes to mind is the Palme d'Or-bait that is the films of Nuri Bilge Ceylan. Methodical (ahem, slow) dramas like Once Upon a Time in Anatolia and Winter's Sleep evoke feelings of contemplation. There is an existential artistry at play that whispers to the audience with a deeply subtle grace.

In his debut feature, Turkish director Can Evrenol grabs subtlety by the throat -- and once his fingernails are in, proceeds to kick it in the balls. Baskin is a weird and wonderful and very bloody. Prepare for a whole new vision of Turkish cinema.

Generally speaking, Baskin is the story of a not-so-elite squad of relatively rural policemen. The guys spend most of their time regaling each other with oft-heard off color tales. When not doing that, they entertain themselves with some light intimidation of locals or a quick impromptu pop ballad sing along. It's just another normal night for the guys, until something really weird and potentially rather evil comes a-knocking.

At the center of all the drama is the rookie cop Arda, played with panache by first-time feature actor Gorkem Kasal. Arda has a mysterious and troubled past which seems to be linked to the strange goings on. But the true nature of how he's involved and what it all means is enigmatic, to say the least.

For all the narrative questions that Evrenol asks of the audience, there is no mystery to his filmmaking prowess on display. This is an assured directorial debut; a polished product that is fitting of a genre director with numerous features under his belt.

Baskin is through and through a midnight movie and when the blood flows, it gushes. There is no shortage of practical gore effects and they are impressive. One scene in particular will have arachnaphobes clawing out their eyeballs (that happens too, by the way).

For all its creepiness and weirdness, Baskin is most defined by its confidence. Can Evrenol is making his voice heard with no use for subtleties or whispers. Welcome to the rebirth of Turkish genre cinema. Are you ready to get bloody?

[Full disclosure: ScreenAnarchy founder and editor Todd Brown served as an executive producer of the film. He was not involved in the writing or editing of this article.]