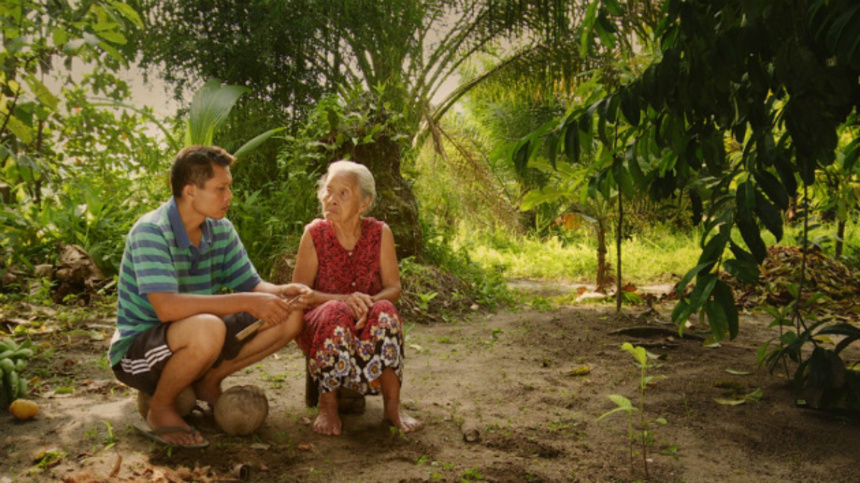 Since I saw it back at the 2012 Toronto International Film Festival, Joshua Oppenheimer's The Act Of Killing has lived up to my early impression, namely, that it is truly one of the great films of all time, documentary or no, providing a startling insight into the banality of evil, the stories we tell one another to make sense of horror, and the way that history, film, and narrative can all collide in ways that are, quite simply, astonishing.

The Look of Silence, a companion piece to the original, plays a very important role in expanding the canvas that Oppenheimer and his collaborators depicted in the first film. Part sequel, part prequel, this is in many ways a far more subtle film than the first, at times somber and contemplative. If the first film's collision of the absurd and the awful provided a kind of cinematic intensity, this film is of a much more subdued character.

When first working on this project, Oppenheimer captured footage from the killers, giving details about their actions against one man in particular. The Look of Silence sees the brother of this one victim, now a traveling optician, quietly and patiently confronting some members of his community that played a role in the death of his family member.

These riveting conversations are intercut with images of his domestic life, with his infirm elderly father cared for by his doting yet delightfully caustic mother. The poetry of the film allows for scenes where water caresses the wrinkles of the father, the tan skin's crevices evocative of decades of a life lived, a son lost, a country ripped apart and rebuilt. The man has survived, but time has left its mark, and as he silently looks back at us, we piece together the stories that are implied by those wrinkles.

In lesser hands these scenes would be superfluous, but here they make the viewer confront the story from a specific, individualized perspective. The numbers are staggering - more than a million killed, many more affected - but out of this sea of horror we're granted access into a single, almost accessible narrative. The universal is made specific, and the thoughts of being led to a waterside for a theatrical, barbaric death are lived though on all sides of the events.

The perpetrators who bragged of the events were those in the proverbial trenches. While The Act of Killing showed the leaders of the regime that carried out the acts, perpetrators that still maintain significant political power in Indonesia, this is much more of a bottom-up approach. As such the magnitude of horror is more focused, the details less about the sheer monstrosity of the event as a whole and instead in some ways forming a more comprehensible articulation of the events documented.

The poetry of the title is as evocative as with the first film; The Act of Killing spoke of both the action of killing itself, how the killing was itself an act, something theatrical and influenced by Gangster films, and how the killers would help act out their own versions of the events.

Similarly multifaceted are the implications of this title - we see Adi looking in silence at the witness testimony (just as we as an audience do), but we see what silence looks like for those that wish to ignore the past, how silence as a pervasive, active, ideological goal has been used to conceal the harm in favour of other, more positive narratives. We also witness Adi help others see, both literally and metaphorically, as he helps killers with the prescription for their glasses, and through a polite yet focused interlocution that gently asks them to open up about the specifics of his brother's death.

Despite being more specific, the film remains universal in its scope. While this is Indonesia's story, there's is nothing unique to the breed of violence that developed there, nothing indigenous to its looks of silence or acts of killing. This remains the most unsettling aspect of both projects, how it would be far more comforting to consider this simply the domain of an island nation on the other side of the world.

Some of this footage proceeds the elements used in The Act of Killing, while others were shot after that film's elements were captured but before the film's release. With some of the confrontations, Joshua becomes part of the story, evoked explicitly from some of those that he's revisiting several years later. We see in a different way than even the meta-textual The Act of Killing the role of the role of the camera in the capturing of these moments, how some of the most astonishing elements occur when those feel free to speak despite the capturing of the moment, while at other times these same people are highly reticent, well aware that what they say will be subject to a different kind of interrogation when captured for posterity.

I don't believe that The Look Of Silence should be discussed as a standalone work. Much of its power is from incredibly subtle interactions, treading on ground firmly laid by The Act of Killing. This doesn't in the slightest make the film redundant, or some sort of academic exercise assembled from trims of the first project.

Quite the opposite, this film in some ways makes the previous film even better, providing richness with the specificity of the story that makes some of the stories in The Act of Killing take on even more relevance, giving names and faces to those people counted by the statistics. The two films in many ways talk to one another, providing a kind of moral and aesthetic back-and-forth that's extraordinary from both a cinematic and historical perspective.

It's possible that this film will be overshadowed by the first work; The Act of Killing was an instant classic, bold brash and unforgettable. The Look of Silence, as per its title, is quieter, a work of more introspection and contemplation. It's a film that requires patience, revelling in the moments of dignity captured on screen. This is a testament to quiet reconciliation, to finding shared humanity despite a history of conflagration.

Victim and victimizer become in some ways inexorably linked as intimately as any family member, forming a shared history that is both insular and impossible to fully understand for those outside this circle. The fact that this film in its own, concise way lets us into this relationship, documenting with exquisite precision this most unique discourse, makes it on its own merits one of the great documentaries of this age.

Combined with its sister film, The Look of Silence is one facet of perhaps the most important documentary project of the 21st century. Oppenheimer and his collaborators have managed to rewrite the rules of this kind of filmmaking, mixing journalism, art, and sophisticated storytelling to lay bare both the strategies that we use to construct our shared narratives and the simple poetry of an elderly man crawling around near the end of his life. Moving, sublime, and astonishing, The Look of Silence is a film for the ages and one not to be missed.

Review originally published during the Toronto International Film Festival in September 2014. The film opens at Landmark Sunshine in New York on Friday, July 17, and will roll out to select cities in the coming weeks. Visit Drafthouse Films for more information.

THE LOOK OF SILENCE [Theatrical trailer] - In theaters July 17th from Drafthouse Films on Vimeo.