Ard Vijn
Editor, Europe; Rotterdam, The Netherlands (@ardvark23)
Tweet Post Submit
(Arrow Video have not been mucking about with this one...)

That Arrow Video has become one of the finest labels in Europe will be no longer a surprise: its ascent to that position actually happened about two years ago already. What is surprising is just HOW good they can be exactly, when they really roll up their sleeves. Several times already, they have taken niche titles and elevated them to must-haves, by including extras which give necessary historical context, and packaging which manages to up the "coolness" factor. Last year's release of Nekromantik comes to mind, for example.
In short: when Arrow Video announces a Special Limited Edition, you prick up your ears and take notice.

And now they've flexed their muscles on Brian Yuzna's infamous satirical horror Society, and I'm very, very happy. After a lengthy wait (an earlier planned release by another company ended up being cancelled), fans of the film can now prepare to be spoiled rotten. It's a stellar package which also happens to look great. Earlier this week, J. Hurtado covered this releases' contents in his Blu-ray review, and he was very, very happy as well.

In this article, however, I will focus on the release's looks. Here is a gallery detailing the packaging this title got. Click on the edge of the images to go to the next slide, or in the center to get a bigger version.
Do note that this release is limited to just 3,000 copies, so if you like what you see here, you'd better hurry... 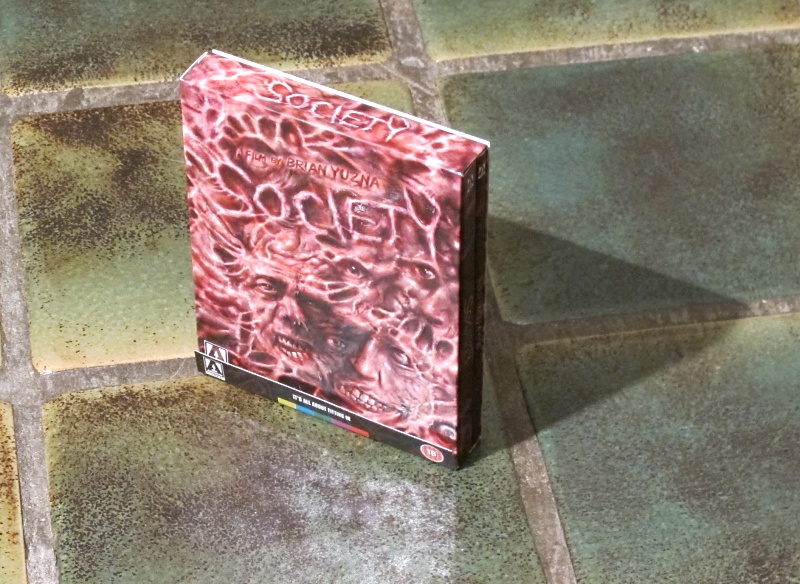 And here it is: a gruesomely beautiful box, made of embossed thin cardboard. 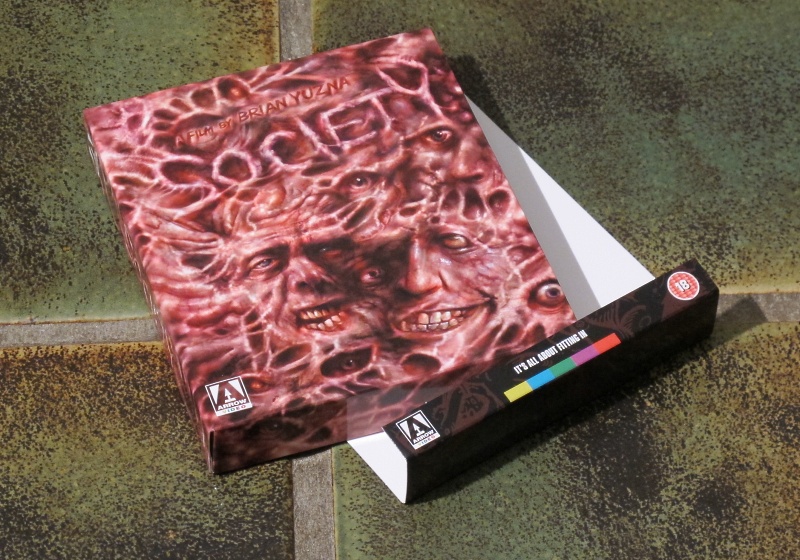 Thankfully, the BBFC rating and the Arrow rainbow are only to be found on the wrap-around, and taking it off reveals the full ugly beauty of Nick Percival's artwork on the set (I will not begrudge Arrow Video one small logo on the front). 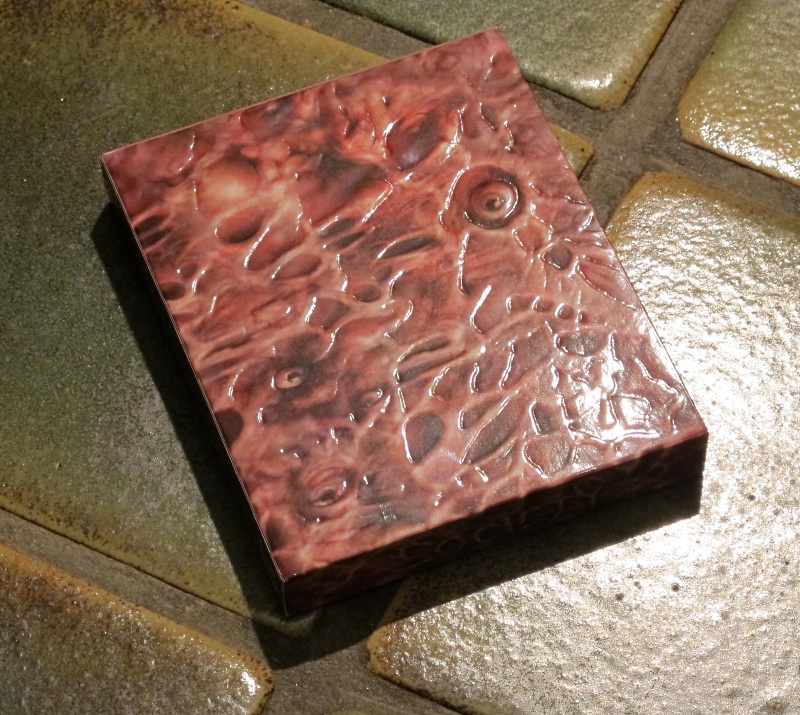 Impressively, the entire box is embossed and glistening: top, sides, front and back. Only the bottom (when stood upright) has remained flat, which makes sense.

It looks awful in the best sense of the word, awesomely so even! 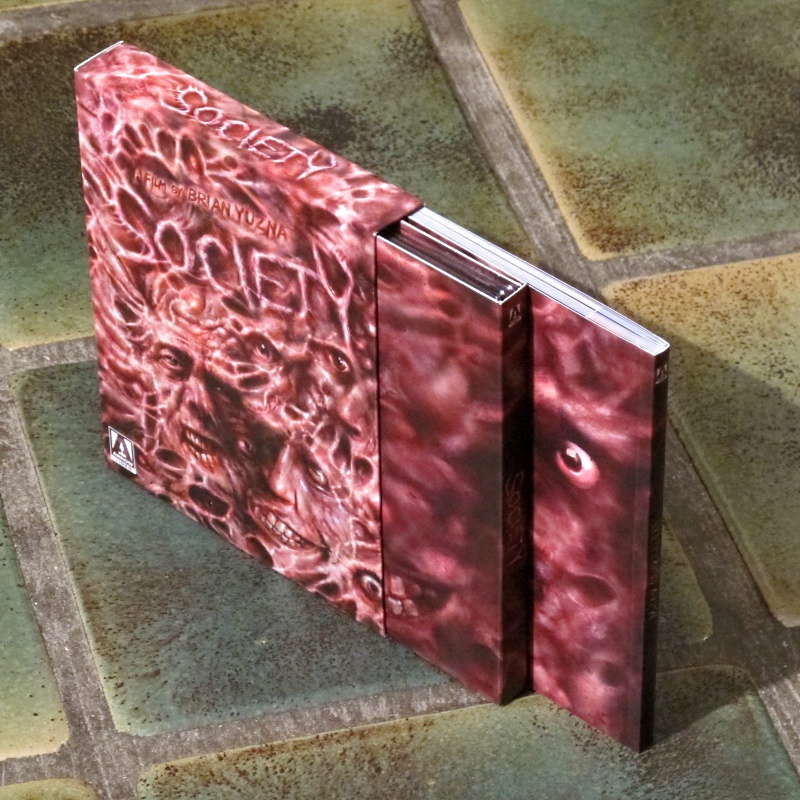 The contents: A digi-pack with the Blu-ray and DVD, and a small graphic novel. 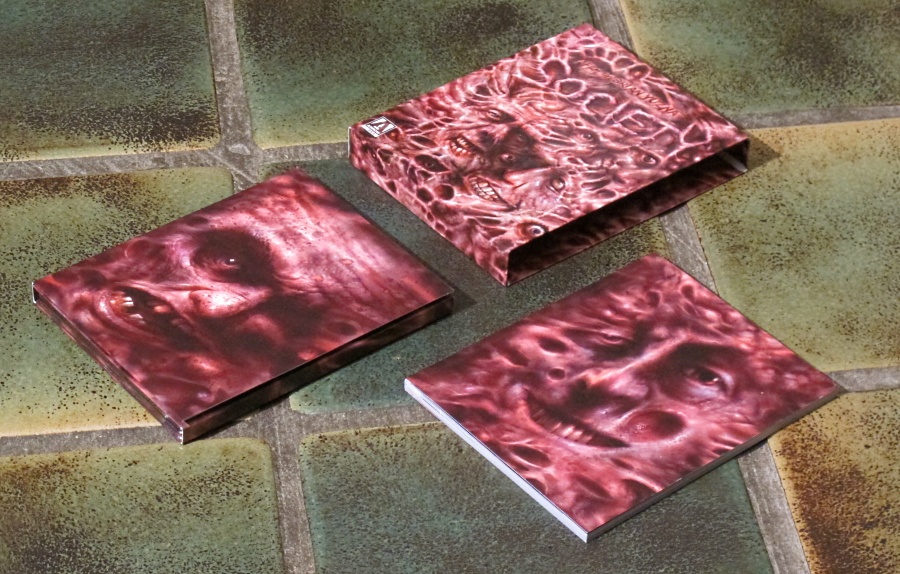 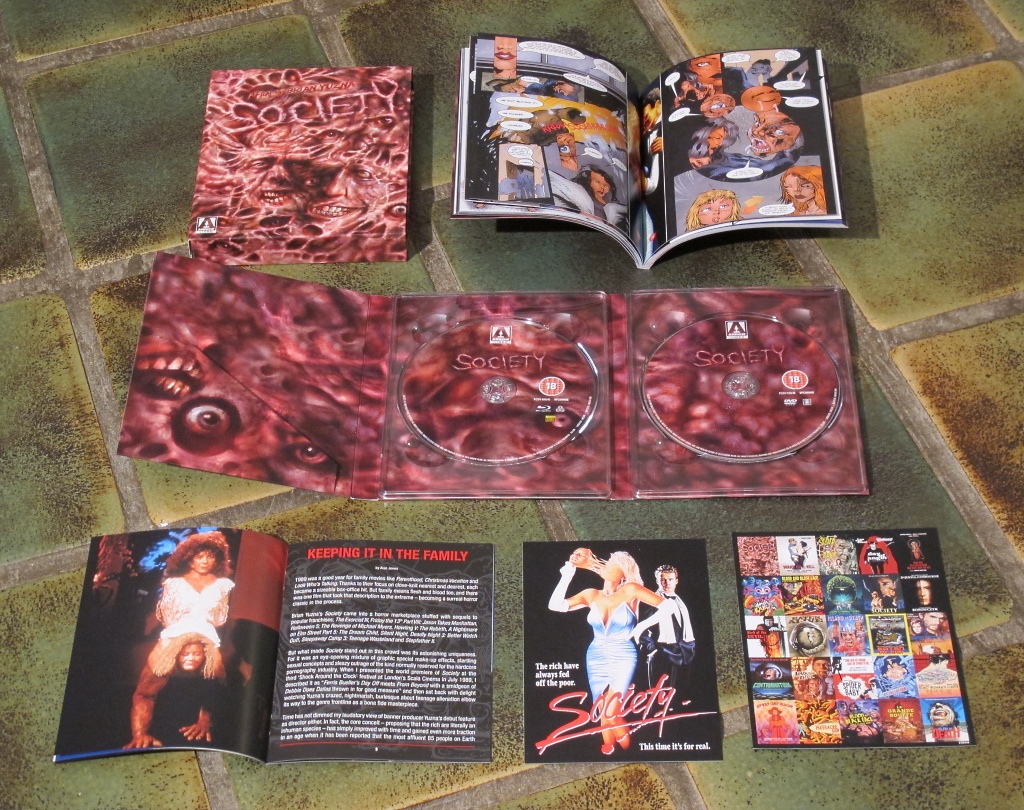 All contents opened: apart from the film and the graphic novel, there is also a production booklet, and a card of one of the original posters, which doubles as the certificate of authenticity. 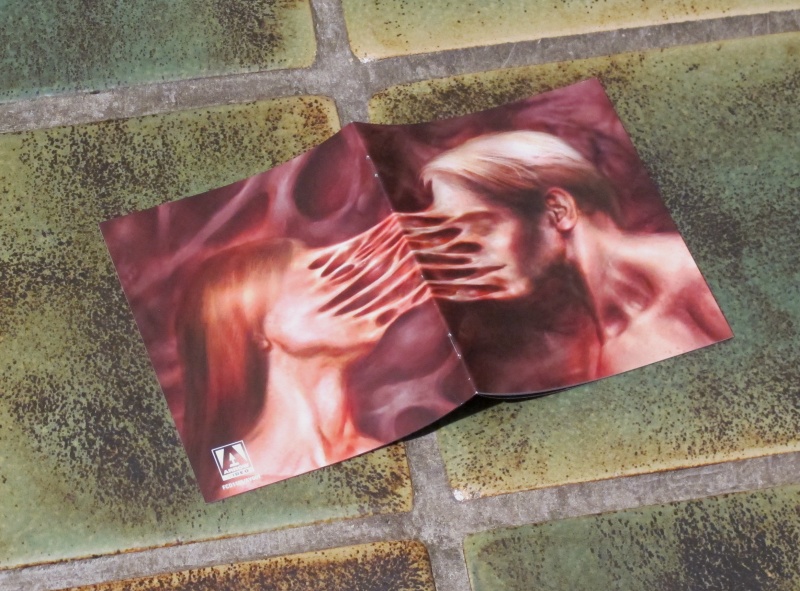 A closer look at the production booklet, again adorned with Nick Percival's art. 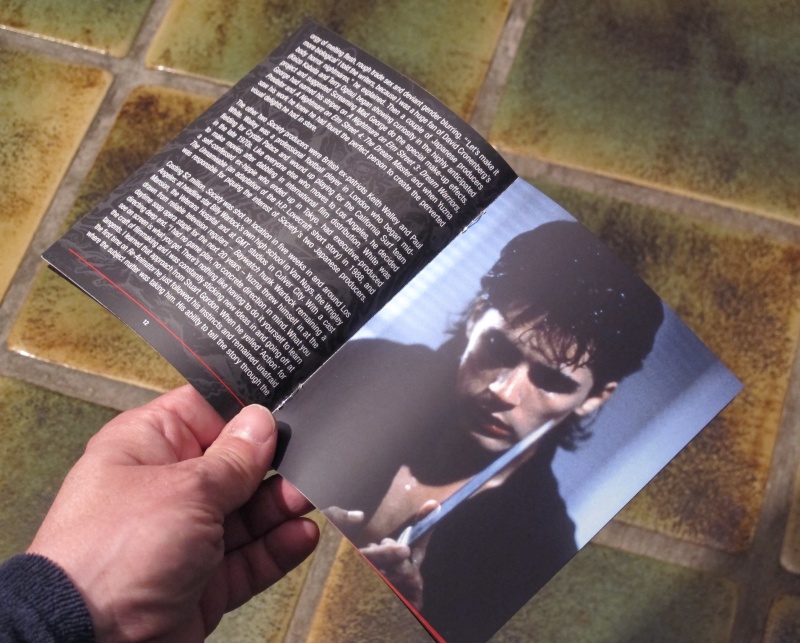 At 24 pages, the booklet contains an essay about the film written by critic Alan Jones. There are plenty of interesting nuggets to be found within, covering the financing, production and reception of the film. 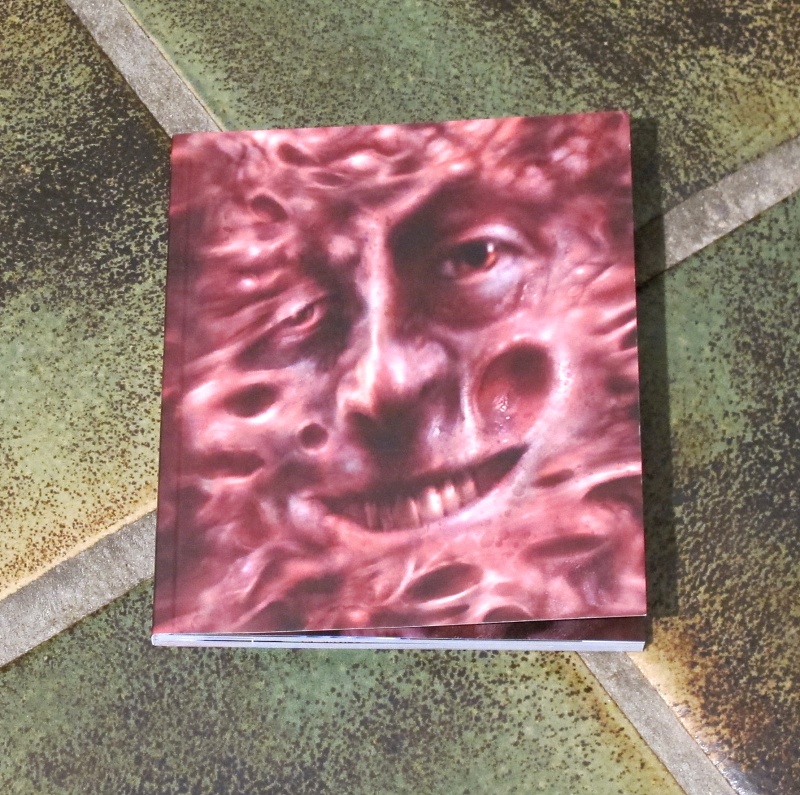 A closer look at the Society: Party Animal graphic novel, a stand-alone 56-page story taking place ten years after the events in the movie. 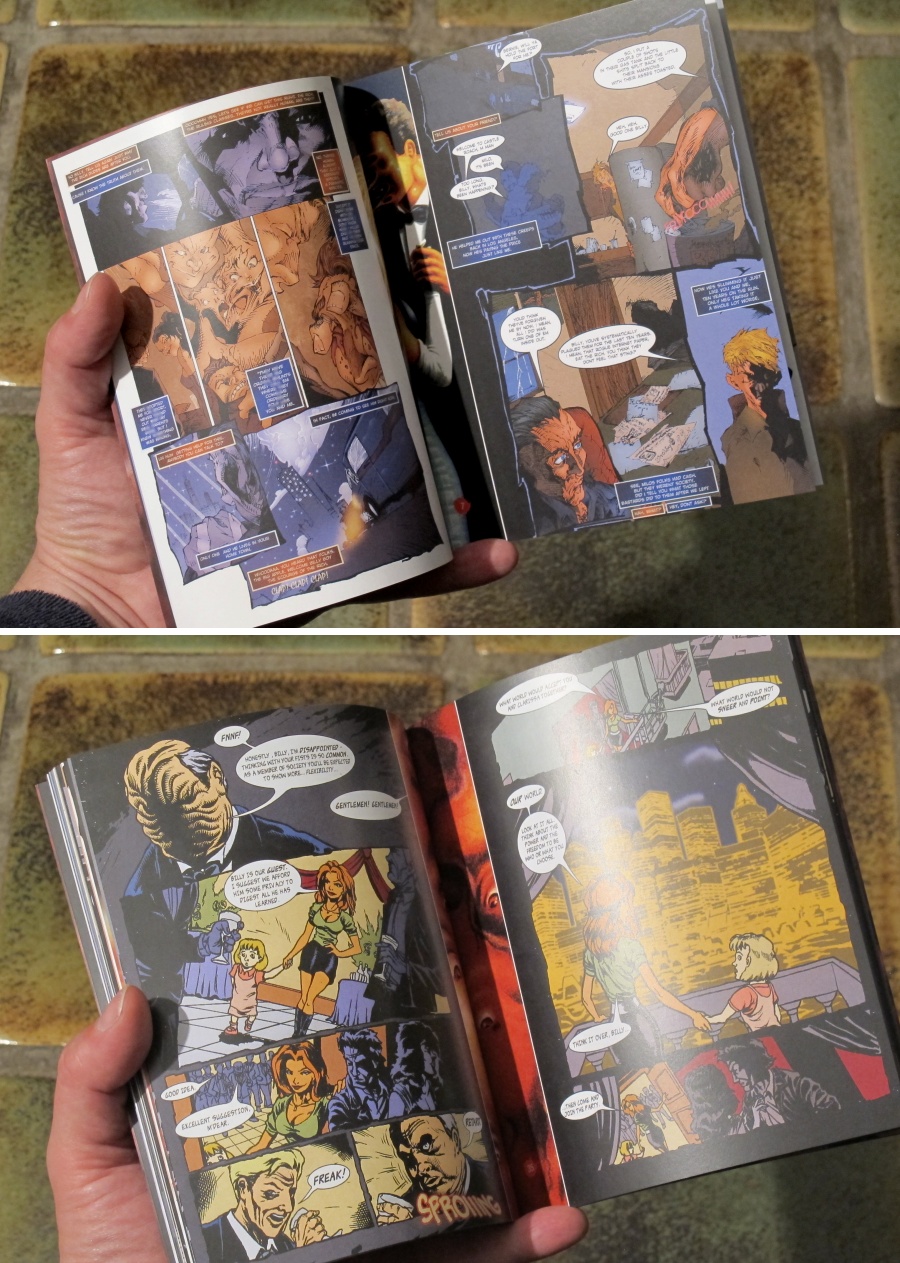 Finally, a look within the Society: Party Animal graphic novel. Originally released as two 28-page comic books, you can clearly see the different art-styles being used between part one and two.

All in all a nice addition to an already excellent set!