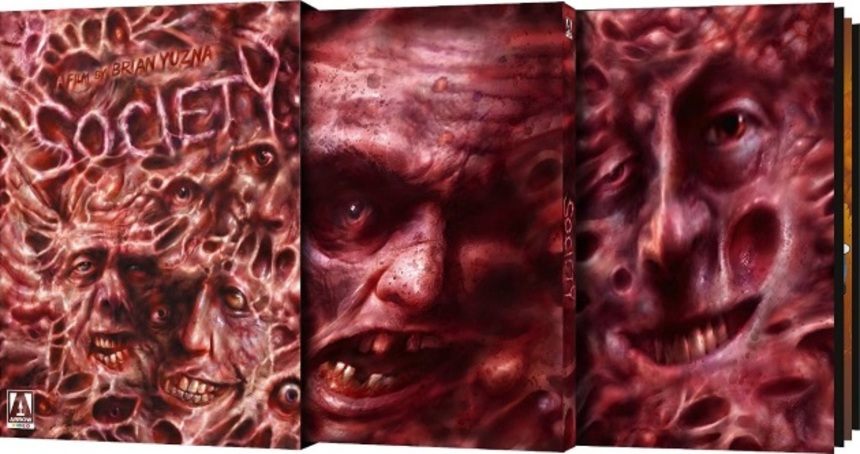 Before Society, Brian Yuzna was known mostly, if at all, as the producer of Stuart Gordon's iconic Re-Animator. Yuzna initially had no interest in directing, his initial interest was in being the big shot, and to him that meant producing. However, the horror heavens are eternally grateful that he changed his mind, because Society deserves a place in the '80s horror pantheon of greats.

The film has long been out of print in most territories for many years, following long running rights disputes. Arrow Video in the US and UK, however, have more than made up for lost time with their release. First, a little about the film.

Society is a story of the little people being suffocated and subjugated by the big people, literally. Bill Whitney is a high school kid who just wants to fit in, though he never quite feels as though he does. His family is very wealthy, as is everyone around him, but they all seem a little off. When Bill hears an audio tape that appears to have captured his family describing an incestuous orgy of sex and violence, he's determined to get to the bottom of it, but he is beset by roadblocks at every turn. When he finally does learn the ugly, gooey truth, he may wish that he hadn't.

This is the kind of film that it's best to view as blindly as possible. This was one of those hard to find films that I'd read a lot about in my years as a horror geek, but never quite managed to track down. It's not that it was impossible to find, it's more that no description in words can accurately describe the experience of the film, and as a result I always put it on the back burner. That was a huge mistake on my part.

Yuzna and Gordon's Re-Animator was at the forefront of a brand new style of horror in the '80s. This was a post-Cronenberg, pre-torture-porn era, in which horror features with middling budgets could still be made and look wonderful on screen. Today, a film like Society would've been made primarily for the direct-to-video market, and while that market existed even in the late '80s (perhaps especially in the late '80s), Society never bows to its limitations, instead it celebrates them and each set piece in the film feels like a centerpiece.

Mixing Cronenbergian body horror with Heathers-style teenaged politics, Society places a premium on gooey practical theatrics and the splatstick comedic timing of someone like Sam Raimi. While Yuzna's film is certainly less goofy than Evil Dead 2, the sense of humor isn't all that different. Japanese effects-madman Screaming Mad George worked up some insane designs for Society, all of which are completely unforgettable, and which will burn themselves into your retinas days after you've taken the disc from the player. "The Shunting", Society's grand finale, is a madly hedonistic, cannibalistic, incestuous, orgiastic bizarro fantasy that is both completely over the top and right in line with Yuzna's thesis on class warfare in the post-Reagan late '80s. You've just got to see it to believe it.

Society had been scheduled to be released by another UK-based boutique distributor for quite a while, but when that distributor announced that it had canceled the release, speculation that Arrow would get/had gotten their hands on the film ran rampant. Thankfully, that talk turned out to be true, because this is an amazing package for a film that was close to being forgotten just for lack of availability. Arrow Video's Blu-ray presentation of Society is beyond my wildest dreams.

Society is presented in beautiful high definition that belies it's age after the first few minutes. Society opens with such an outdoor shot that had me worried for the overall image quality of the film, however, once the action started and the cameras moved indoors, I was blown away by the remarkable detail and color reproduction on the disc. The film itself has a very light color palette, with much of the action taking place inside white walled buildings or during bright daylight, which this disc handles both beautifully. Close-up detail is remarkable, which does Screaming Mad George's work justice, as you can see just how slimy the set must've been for some of the wetter FX. The audio is also quite good, and Arrow have left the original stereo track alone, but it has no distracting pops or hisses, just clear dialogue and sound effects, disgustingly clear in come cases.

Where the disc really excels is in the expansive printed and video extras. I would've been quite happy with the film looking as good as it does and a 20 minute making of documentary, thankfully, Arrow Video went the extra mile and made this disc something very special. The disc features hours of interviews with Yuzna and several of the stars of the film including Billy Warlock, Devin DeVasquez, Ben Meyerson, Tim Bartell. The interviews are incredible because of the fondness that everyone involved holds toward the feature. They all knew they were doing something original, and it shows in their inextinguishable enthusiasm for the film, every 25 years later. Another amazing segment is an extended piece on the building of the FX for Society with Screaming Mad George, David Grasso, and Nick Benson, all of whom share a similar fondness for the film and the lengths to which they were allowed to go to make Yuzna's film as insane as they could. Those interview fantastic, but they are supplemented by a Yuzna audio commentary which is as fun and informative as the interviews, a Yuzna Q & A from 2014, footage of an archival interview with Yuzna before the film's 1989 world premiere, and a Screaming Mad George music video, just for fun!

Last, but certainly not least, there is the amazing embossed limited edition digipack packaging with comic. Society may never have spawned a movie sequel, but in 2002, Rough Cut Comics created Society: Party Animal, which is reproduced here in its entirety and disgustingly captures the essence of the film perfectly. This is a disc to own, well worth the price.