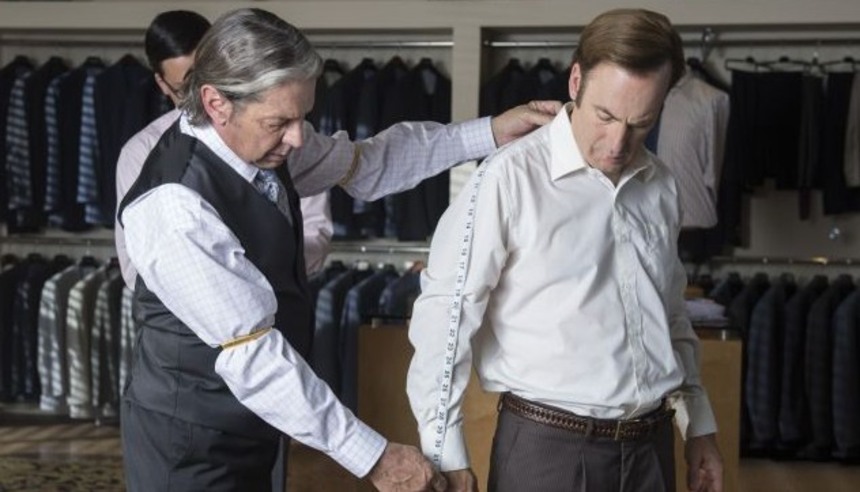 With its fourth impressive episode so far, we can now confidently say that Better Call Saul knows what its doing and is doing it well. It's a worthy successor to Breaking Bad, not because it slavishly mimics what that show does but because it is able to use its familiar style and atmosphere to tell a new story, and it's able to establish a different set of stakes that make it unusual and special among prequels.

Picking up from Jimmy's line in last week's episode that he's "no hero", this instalment continues to explore his relationship with what is right and what's wrong. It opens with an intriguing flashback that shows us what might come or what has already happened, establishing Jimmy (or Saul, in this instance) as somebody you can't play easily. He's a smooth operator, and while he appears frantic he tends to always have some notion of a plan.

The episode then continues with the aftermath of last week's conclusion, showing the Kettlemans trying to convince Jimmy that they've done something that might be illegal but that they think isn't necessarily wrong (basically, they think they deserve the stolen money), before declining his services and calling him "the kind of lawyer guilty people hire". This distinction between what is right and what is lawful is something Jimmy should be struggling with here, but he resolves to take the fight to Hamlin, Hamlin and McGill (HHM) because he knows he's the underdog but he also knows what he can achieve even with just a small amount of money.

"Hero" does its best to convince you Jimmy's setting himself up for failure. Not only is he wading into a fight against a huge law firm, he seems to be doing so aimlessly. It almost appears hilarious that he'd even try, and that his attempts are weak and poorly thought out. In reality, he's using simplicity to both make Hamlin see him as a threat and underestimate his intelligence. His eventual "heroics" also have the consequence of making him seem more like a man of the people than the big law firm can ever hope to.

Kim warns him that it's a fight he can't win, but he's no idiot and the fact that his sob story media coverage also turns out to be a way to mount some pre-planned positive publicity for his tiny one-man law firm is rather ingenious. Kim's probably right that he can't win, but that doesn't mean he can't fight in the first place. It's rather thrilling and exciting to realise we've been duped too, and that we are also underestimating the nuance of a plan from Jimmy McGill.

Viewers of Better Call Saul have been wondering what would set the man on the path towards becoming Saul Goodman. There was never going to be any deep-seated anger, resentment and desire to be a criminal within Jimmy (unlike Walter White), so it's something much more familiar that starts him on this journey: desperation.

It's a despondence and a need for the easy way out that sees him take that money, just like what drove him to team up with those skateboarding kids back in the first episode. His financial struggle is what sends him on a darker path. It's that and a sense of danger established by Nacho. Jimmy needs the publicity for a number of reasons, and his desperation is what's causing him to find new, quicker ways to get the name recognition and clients he'll need.