Review: BETTER CALL SAUL S1E09, PIMENTO (Or, You're Not A Real Lawyer) 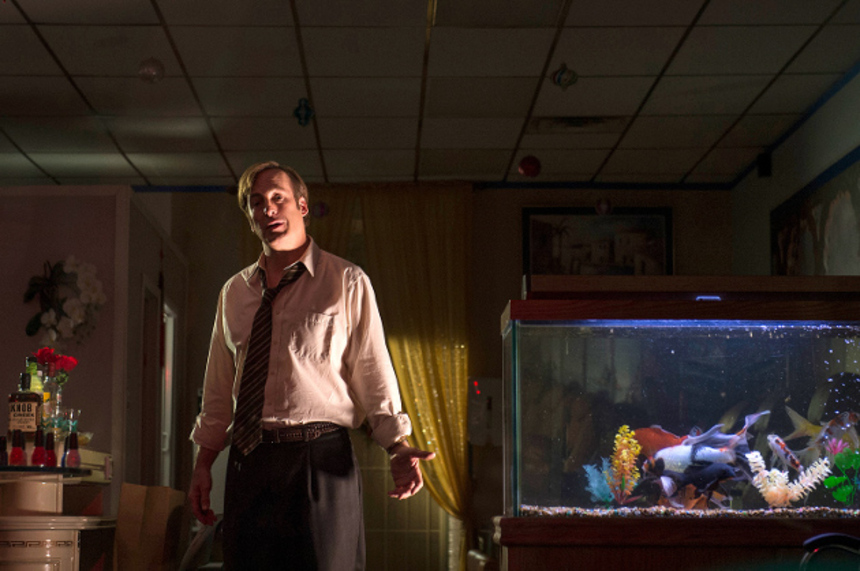 And, suddenly, it all makes sense. In one devastating conversation, Better Call Saul tells us everything we need to know about why Jimmy McGill becomes Saul Goodman, and in doing so it has revealed what I was so uncertain of last week, the underlying structure of the season.

See, we all entered this thinking exactly what Chuck said, that Jimmy's not a real lawyer. The Breaking Bad audience knows Saul's skilled, but do we think of him as someone who sees the law as sacred? Probably not. But that's what this show has been about. It has constantly thrown obstacles and moral dilemmas at Jimmy only for him to reveal his ambition, his propensity for hard work and his relatively firm moral compass. These weren't the things we necessarily expected from him, and it's only now that we realise just why Jimmy would turn from his family name.

As much as Howard Hamlin is a jerk, Chuck McGill might just be worse. The level of deception and lack of feeling required for him to so completely ruin Jimmy's chances of progressing as a lawyer within such a reputable firm (even if Hamlin isn't kind to Jimmy, I don't believe he'd have had any choice not to hire him if Chuck hadn't made it happen - and it wouldn't have been a wise business decision) is remarkable, and it makes him rather despicable. He takes so much from Jimmy in terms of help, and he views what he gives back by sharing his legal knowledge as charitable when he's never prepared to give him respect, which is the thing he wants most. It's no understatement to say that Jimmy's realisation of Chuck's rejection of him is the key moment of the show so far.

When your brother has turned you away so definitively, why wouldn't you take the deal and go become your own man? Jimmy always wanted the chance to make things work out, but with his brother's support. Once he knows he's never had that anyway, what's stopping him from doing it his own way? In so many ways, this show has revealed how much it knows about the usual weaknesses of prequels and it has found a way to use what we know about Saul Goodman to shape Jimmy into him. It has worked marvellously.

But that's not all, there's still one episode of Better Call Saul's first season left and we are still yet to fully see where Mike fits into the picture. He takes on a protection job this week and ends up uttering what may be one of the most important lines of the show, telling the nervous client, "I didn't say you're a bad guy, I said you're a criminal". The distinction between a bad person and a criminal is vague, but it's one that Breaking Bad explored and Saul is exploring. It might be a bit too much to expect Jimmy and Mike to work together in the finale, but it'll definitely be something for next season if we don't see them back together sooner.

As it is, "Pimento" is one of the best episodes in what has turned out to be a season full of great episodes. This is one of the strongest televised prequels in recent memory, and possibly ever. The way it uses our expectations against us and is able to build effective and shocking moments into a narrative that we think we know is exceptional, and it's great that we can have some idea what might happen but still be gripped by the "why" and the "how" of it all.