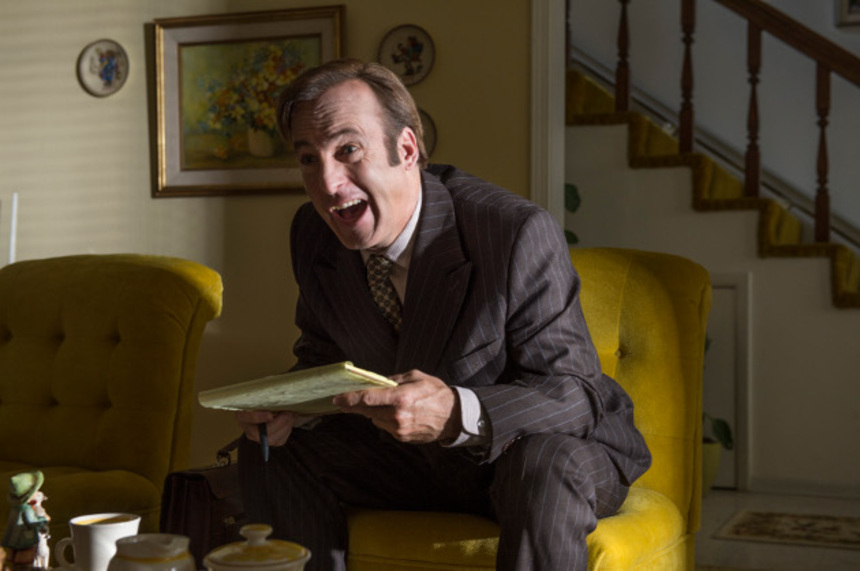 More than any episode of Better Call Saul so far, "Alpine Shepherd Boy" questions whether Chuck's condition is something physical that he's really suffering from, or more of a psychological affliction. It's to the show's credit that this has been presented so frankly that we have been unlikely to question it too much until now. We mostly see how it affects Jimmy to see his brother suffer, and we occasionally get point-of-view shots showing the extent of Chuck's pain.

But, when a doctor - at the hospital he's been taken to after being arrested for stealing a newspaper in last week's "Hero" - is able to surreptitiously switch on an electrical device without him noticing, it punctures the illusion of realism Better Call Saul has created around his condition. And, getting to this point all can be traced directly back to Jimmy's actions in withholding the local newspaper from Chuck in the first place. As ever, the writers love a sense of causality to be maintained.

For the most part, this is an episode that is more relaxed and slow-paced than the previous ones. It's a patient instalment, one that is happy to let a scene where Jimmy waits for an elderly woman to come down the stairs painfully slowly play out in full. It's all about the lengths he'll go to for cash, and you can see that eagerness when he snatches at his payment just ever so slightly too quickly. He's been through a lot to get on a path towards setting up his own firm, and the first two potential clients he visits in this episode are clearly worthless to him.

While it's taken Jimmy a lot to get this far, though, we do see now how he can't resist the shortcut when it's right there in front of him. Sure, Kim gives him some advice about why being a lawyer for the elderly could be important but it's plain to see that Jimmy's in this for the easy money. And it's clear to us in the audience that his comfort with exploiting those desperate for help or representation is what'll set him on the course towards being a lawyer for crooks in the future.

Previous episodes have ended on cliffhangers, reveals and dramatic payoff, but here we see Better Call Saul begin to play with mystery. For Breaking Bad fans, Mike's past is something that has been questioned and theorised over, and now it looks like it's something that is going to be addressed here. After doing little of much consequence with Mike for the first few episodes, the show leaves Jimmy behind as he exits the parking lot, choosing to follow Mike back home and consider what secrets he might be hiding.

We see flashes of the man we know from Breaking Bad in his response to realising someone's outside his house, and he opens his door to see numerous cops, clearly from his past. He remarks that they've come a long way to find him, but why? Both expectedly and tantalisingly, the episode ends just as it looks like something really momentous might be about to happen.