Review: BETTER CALL SAUL S1E10, MARCO (Or, Could Be Worth A Couple Of Bucks) 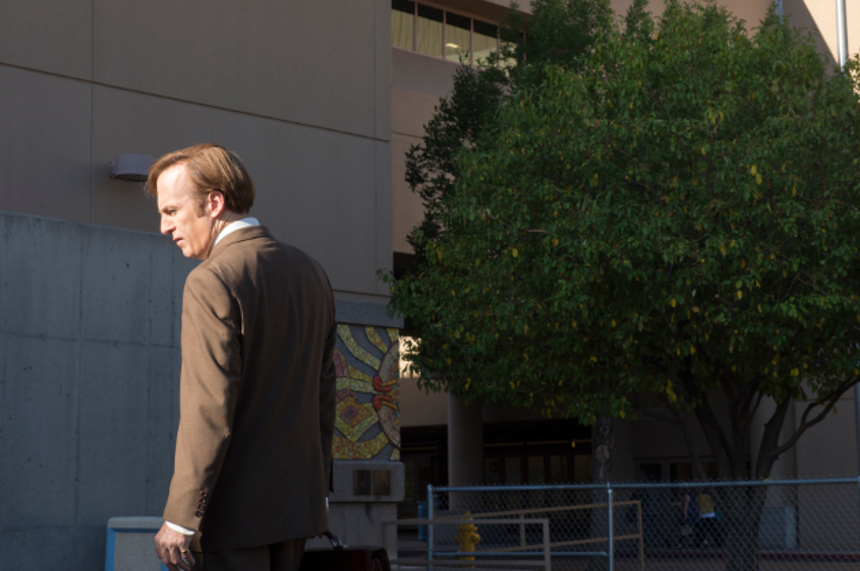 The most obvious similarity between Breaking Bad and Better Call Saul is that they're both tragedies, just in very different ways.

Bad was about seeing Walter White revealed as the criminal he's always been inside and how his actions doom him, Saul is about seeing Jimmy McGill turned into a criminal by the world around him being so convinced that he's bad that he's left with few other choices. But, to make it work, it has to be a choice. And by ending the season with him moments away from the offer of a real career in law only to turn his back on it, we see the real beginnings of a man who will later be the lawyer to the notorious drug kingpin.

"Marco" is a rather less eventful finale than some might have expected. It doesn't rush the journey of Jimmy to Saul, and it doesn't necessarily tell us much that we don't already know about the character. But, by circling back to his days as 'Slippin' Jimmy', it fills in some of the blanks about the severity of his arrest and the conviction of his belief in leaving a life of small cons behind to be somebody respectable.

It feels like we now have a really clear picture of who Jimmy is, and it's no surprise to see that a week of thievery ends with his accomplice Marco having a heart attack. That sense of karma is always baked right into this world.

It's funny to think about the kind of things Better Call Saul has the ability to answer. It can tell us how exactly Saul and Mike came to know each other and work together, but it can also fill in much smaller details, such as why Saul dresses the way he does. In the finale, we discover that the ring he wears comes from Marco and probably serves as a reminder for him not only of his friend but of the scams they successfully pulled off together. This series does a great job showing how it's just the right mix of friendship and peer pressure that pulls Jimmy back into the criminal world.

We've already seen how his relationship with Chuck has been ruined, and we're beginning to see how he might destroy other relationships too. His dynamic with Kim has been one of the things that has been most enjoyable about this season, but how many times will she stick her neck out for him if he's not willing to take the help any more. How will she respond to the kind of clients he will look to take on if he pursues the path it looks like he's just started on?

This is the path Jimmy has chosen, and the season is very decisive in its ending. We had to learn just how deeply held Jimmy's sense of morality is to understand how his brother's betrayal would set him on the road to being Saul Goodman. He goes back home looking for something that he'll find hard to discover because he both has and has not changed by becoming a lawyer.

He's no longer just a con artist, but the setbacks he's endured have stopped him from becoming the successful lawyer he's capable of being. And so he decides to throw morality out of the window, and soon he'll reinvent himself. We know where this is going, and part of the beauty of what Better Call Saul has done is that it's made us care more, so much so that the knowledge of where it's going doesn't harm the drama at all. Season 2 can't get here soon enough.