Ard Vijn
Editor, Europe; Rotterdam, The Netherlands (@ardvark23)
Tweet Post Submit
(Throw as much stuff against a wall as you can find, and then see what sticks... hey, it worked for the films!)

We can discuss all we like about whether the Expendables films are good, bad or awful, and get nowhere. I like them, or at least they manage to make me smile for the idea behind them: a bunch of people in the film industry, banding together to do what they used to be famous for, and to hell with reality. Interestingly, the way the films were made meant they did not share a single distributor worldwide, but were sold to many different parties in many different regions. Which means there are many different editions. Be still my collector's heart!

By now I've stopped trying to predict why a property gets dumped in one country and put on a pedestal in another. I mean, who would have thought that Germany, of all places, would have the best releases for Seventh Curse, Battle Royale (well, for a while at least) and the The Raid films?

So guess where the three Expendables films got royally pimped? My home country of The Netherlands. I kid you not.
And now that the third in the series has got its own daft Dutch release, I thought it was time to make a gallery of them all.

Feast your eyes (or shake your heads) at these images...
Remember, this is a slide show: you can click the sides of the pictures to switch slides, or click in the center for a larger version! 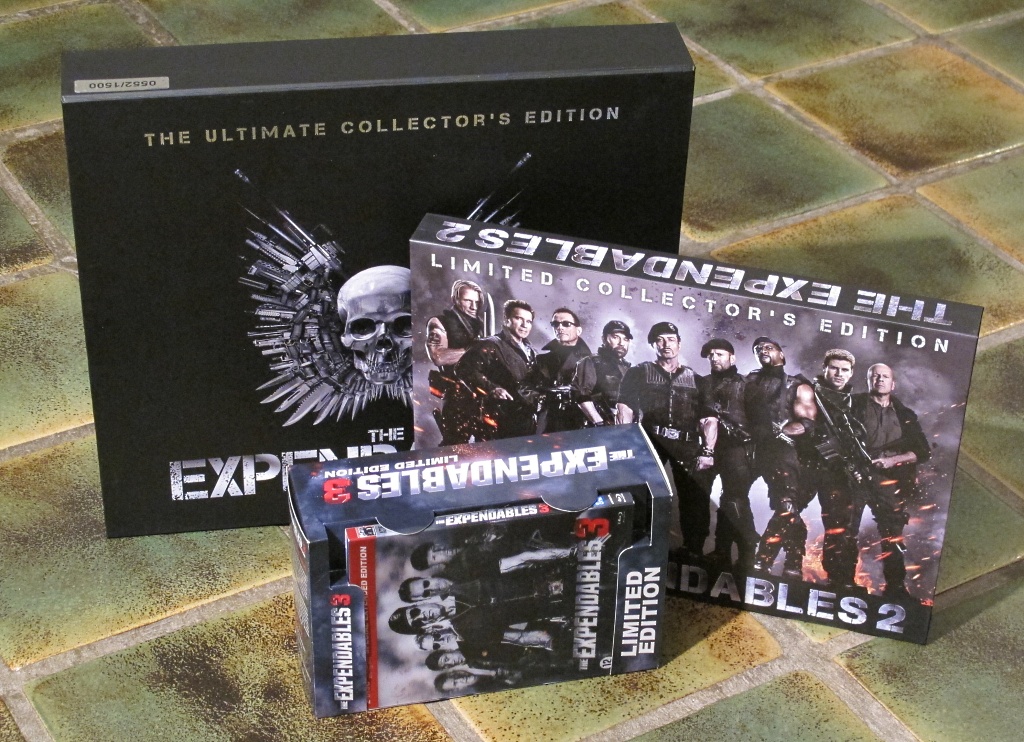 And here they are! Just look at this pile of sheer preposterousness...
Interestingly, the sizes of these boxes seem to reflect the box office returns. 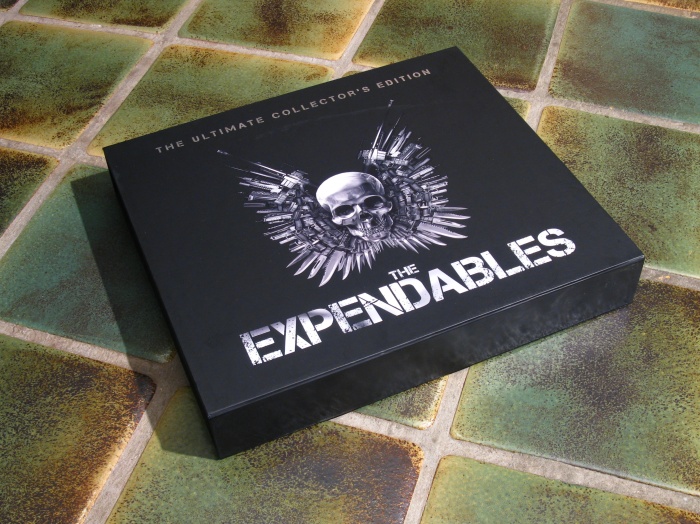 The box for the Ultimate Collector's Edition of The Expendables. It's black, with that great logo glistening embossed on top of it. But mostly, it stands out for its size. It's huge. 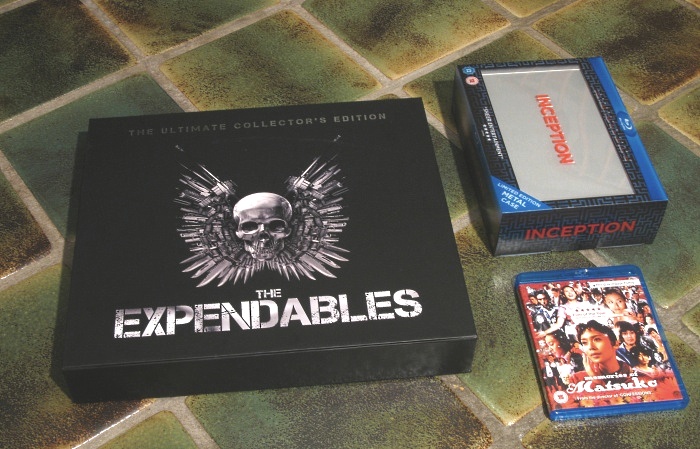 Just how big is this edition? Well, it's the single largest in my entire collection. Here is a size comparison with a regular Blu-ray, and the Limited Edition Suitcase of Inception (itself no baby in this respect).

It dwarfs them both... 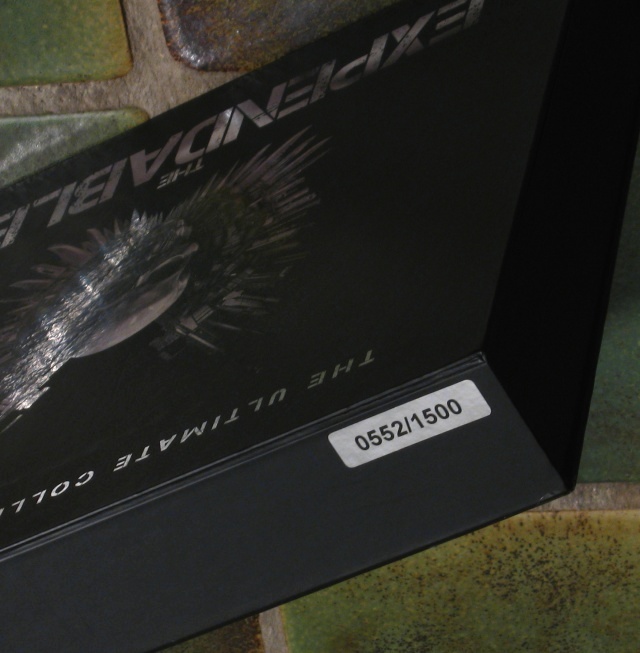 And it's nicely limited and numbered to just 1500 pieces. 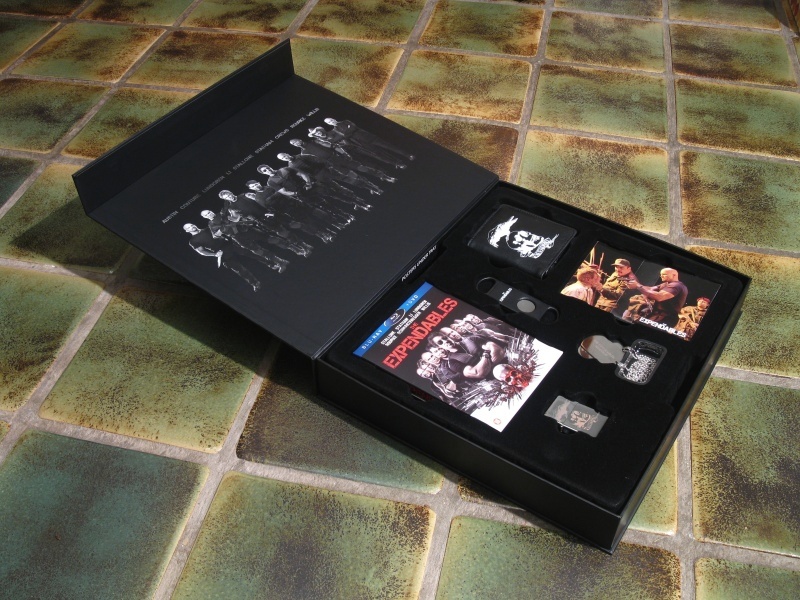 The huge box opened. There are cards, trinkets, the film, posters... 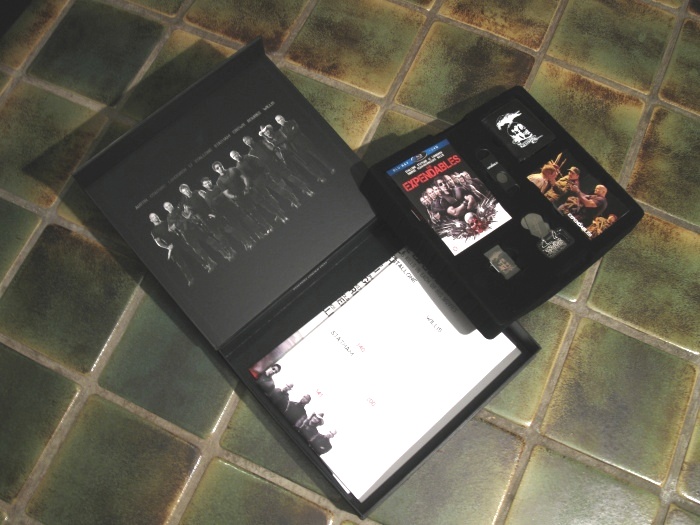 The inside is actually a large tray, which you need to take out to get to the second layer of goodies! 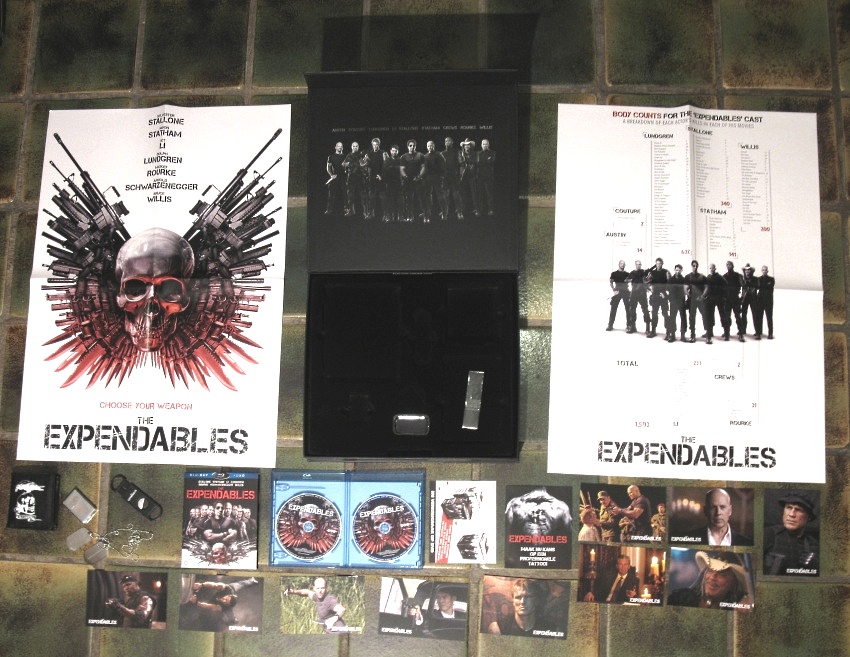 And here are all contents. I had to stand on a ladder to take this picture. There are two reversible posters, one of which shows the body-count by actor from each movie they were in. There are loads of cards. There is a wallet, a Zippo lighter, dog tags, and a cigar cutter. 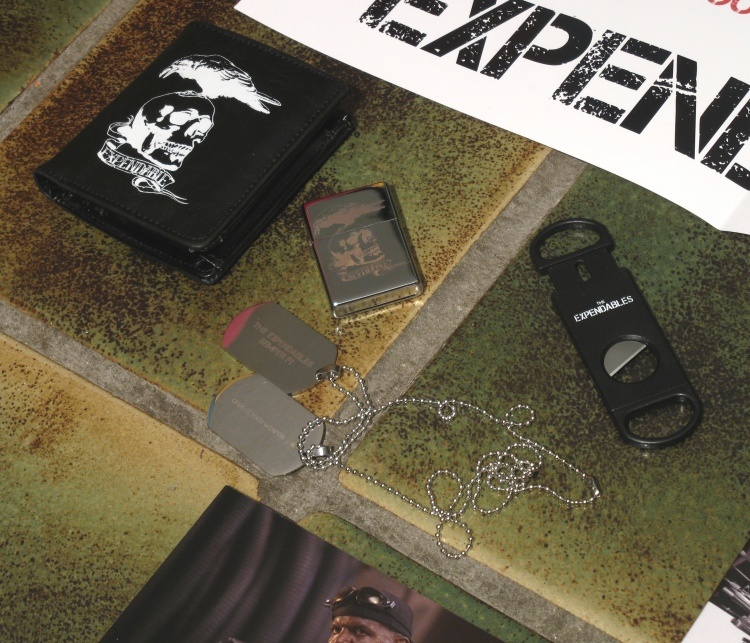 A closer look at the wallet, the Zippo lighter, dog tags, and a cigar cutter. 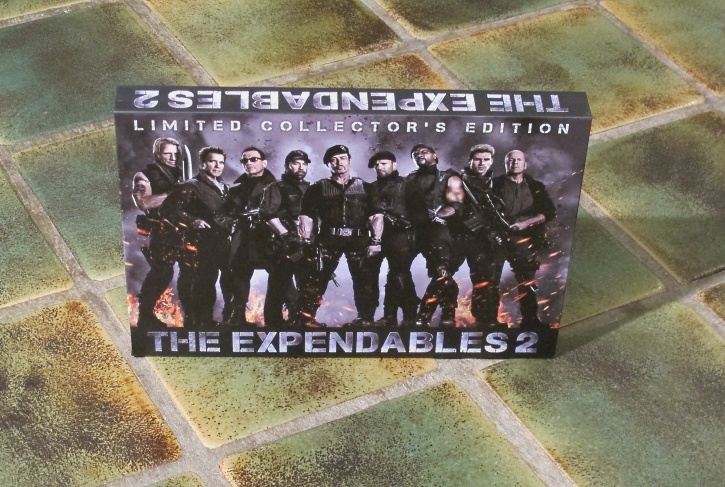 Moving on the Limited Collector's Edition of Expendables 2.
Again a big box, but not as huge as the first one though. Maybe that's why they dropped the "Ultimate" moniker this time? 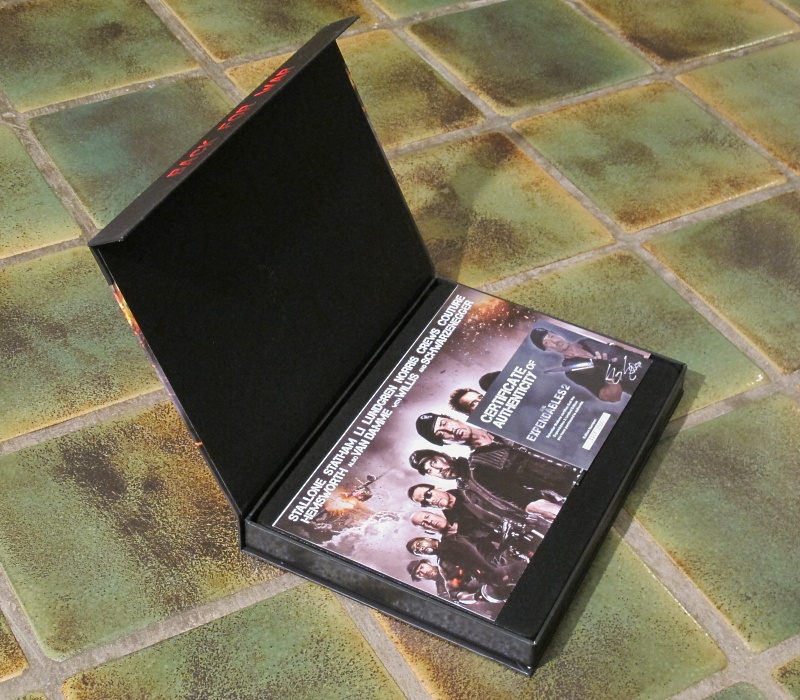 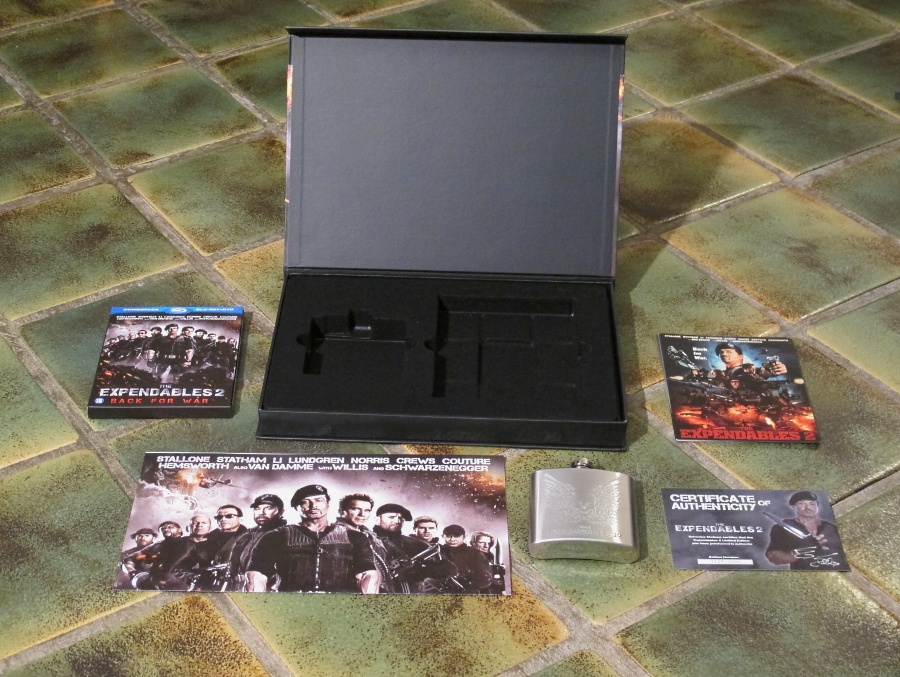 The contents: a certificate of authenticity (this set is Limited and numbered to 2500), a poster, cards, and a flask. 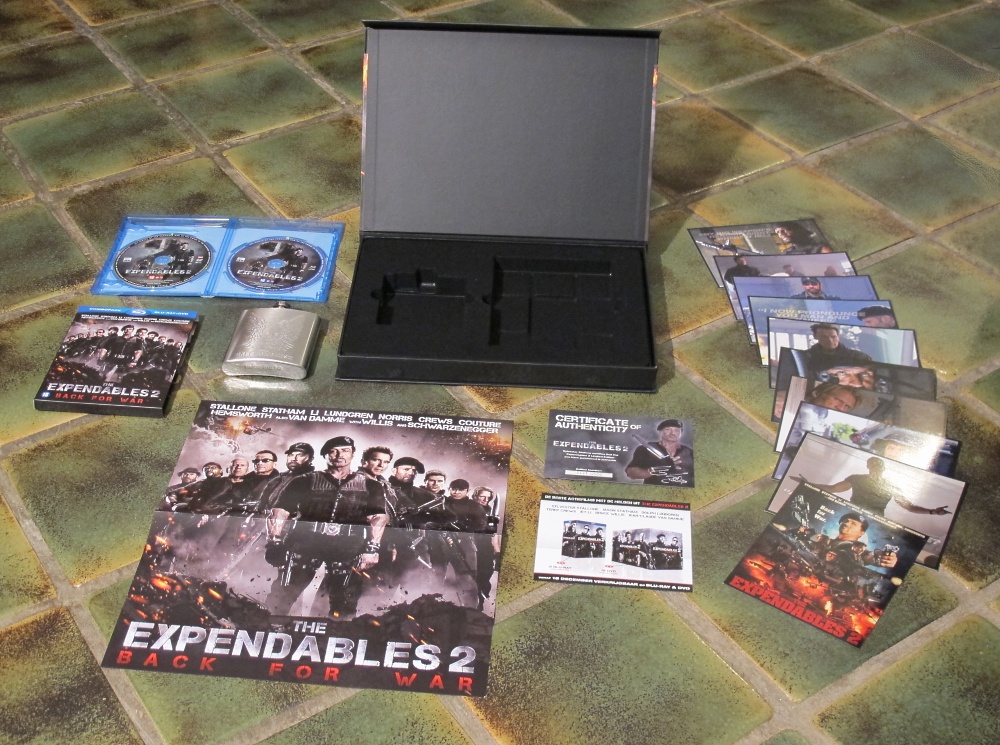 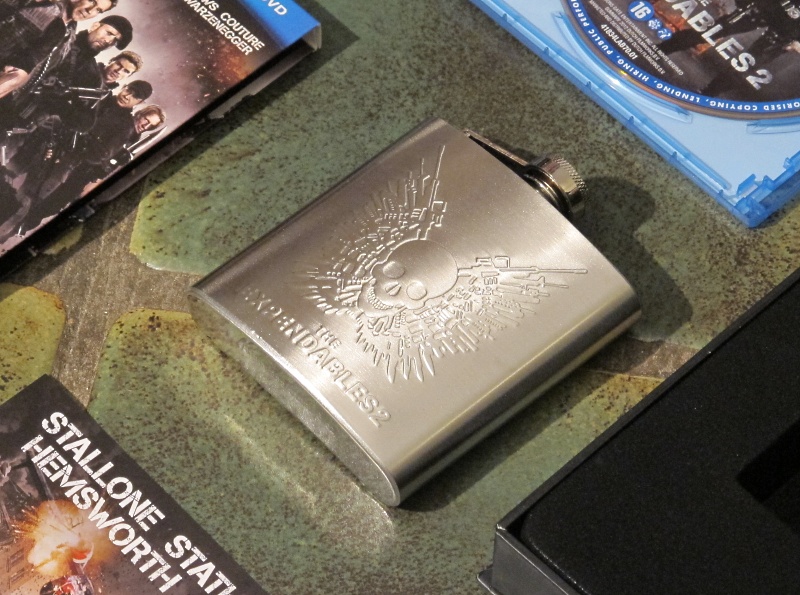 Here is a close-up of that flask. Cool, I love that logo... 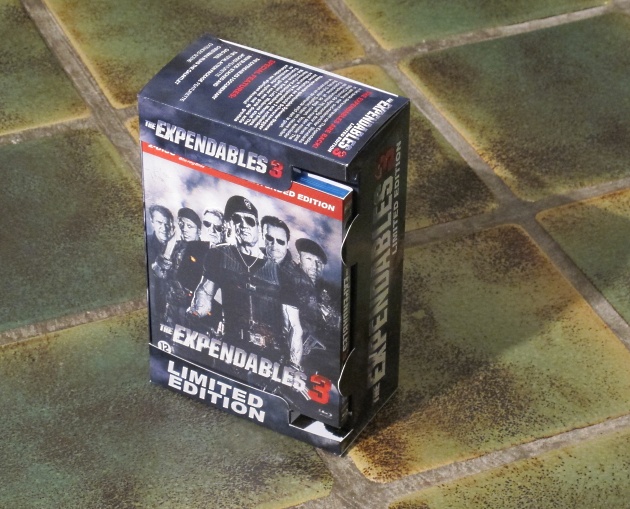 Moving on to the Limited Edition of Expendables 3.
This one is significantly smaller than its two predecessors, but hey, why not call it a Collector's Edition? There are collectibles! 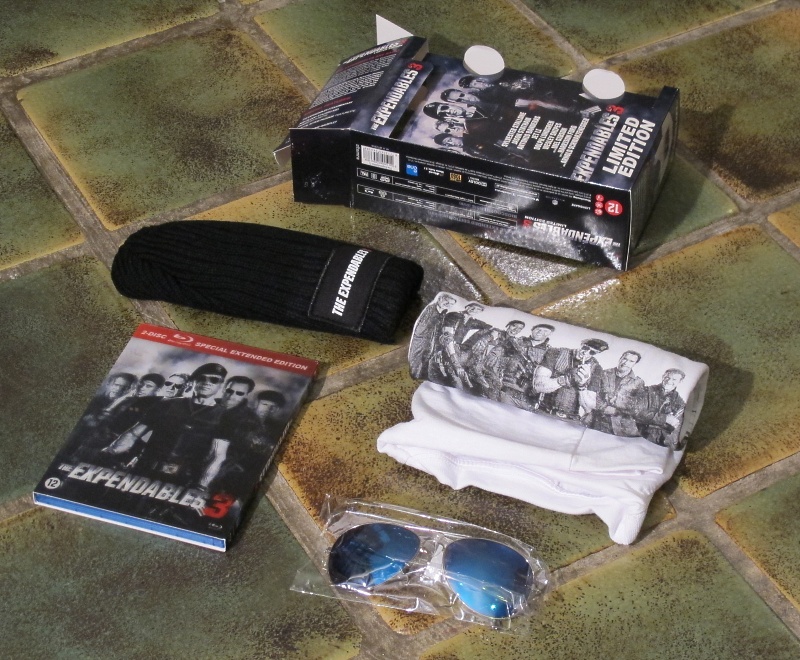 The contents taken out. Technically, the films themselves weren't even "in" the box, as they were stuck on the front.

Still, the slipcase has a 3D lenticular cover, and you get a T-shirt, a woollen cap, and a replica of Sylvester Stallone's sunglasses. 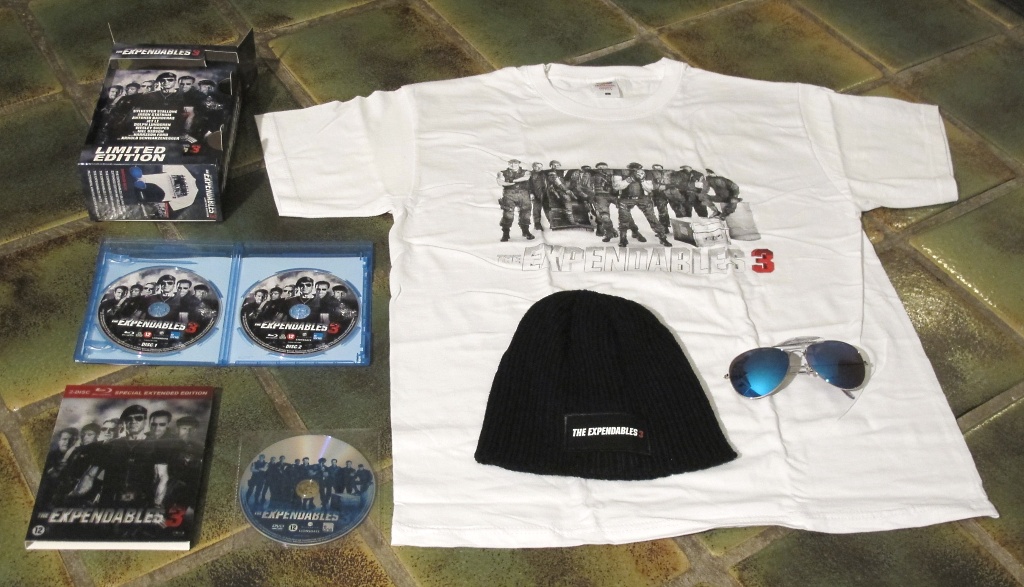 All contents opened and unfolded. Bar weapons, everything you need for a bank robbery is in here. My friends can testify that I look absolutely unrecognizable in this gear!

More about The Expendables

More about The Expendables 2