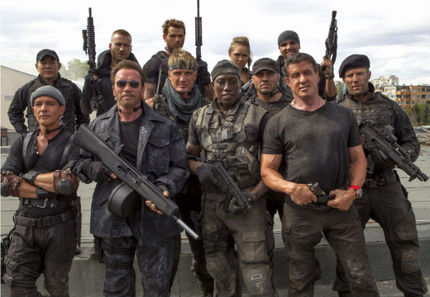 "It's better than the last one!" Faint praise, perhaps, but given that Expendables films don't aim very high, it's probably praise that will be graciously accepted for The Expendables 3.

It's fair to say the entire Expendables franchise is a "what if" proposition - if the scope of action movies has moved into CGI fests, comic book capers and Young Adult ennui, the way to make space for "old school" brawlers is to do a package deal. We're long past the point where simply seeing Sly and Arnie on screen at the same time holds any weight, so it's come down now to just what if any story can be wrung from having a mass of testosterone on screen at any one time.

Story-wise the shtick is as predictable as ever - after a brisk train sequence as gratuitous as any action sequence need be, the guys rescue a new addition to the team (an alumnus played by Wesley Snipes), who brings the right brand of crazy and menace to his role. Tax evasion jokes aside, his addition is genuinely welcome, and makes the by-the-numbers grunts from the likes of Dolph Lundgren or Randy Couture seem even more out of place beside a guy that can actually inhabit the part.

Statham seems to have woken from his stupor in The Expendables 2 (and he was the only good part in the first flick), but there's still not enough for him to do. Naturally, when the teams get bigger and bigger, there's a law of diminishing returns, and even the most menacing of stares can't make up for the emptiness of it all.

One way of letting things breathe is when the film retires the old guys in favour of a new, brash team. The impetus is when a kidnapping goes wrong and the bad guy (the seemingly undead Mel Gibson) puts one of the team into the hospital so he can go spend more time on a network television comedy. These new guys, they know computers and stuff!

There's a boxer (Victor Ortiz), an MMA fighter (Ronda Rousey), and, um, a Great Debater (Glen Powell) and a Twilight guy (Kellan Lutz). With suit-up montages and a thumping score, their inclusion seems even more vacuous, and when the obvious happens, and the old guys come back to make things right, it's like one of those contests where they try to cram people into a phone booth (except, naturally, it's an attack helicopter).

Still, I'm getting ahead of things. The story (such as it is) is again by Stallone, who, it must always be pointed out, has an Oscar nomination for screenwriting. I'm not sure if it's the even lowered expectations, but Gibson's return is played with the right level of mania. He seems to get this film this time 'round a bit better, and while the comings and going are telegraphed miles away, it's still a decent us-vs-them battle, complete with the suicidal actions involving the armed forces of some random "-stan" suffixed country.

One of those other new guys is Antonio Banderas, written as a scene stealing weirdo, and he plays being fucking annoying with aplomb. Kelsey Grammer seems at home as a recruiter, while CIA guy Harrison Ford pulls out his angry face to make things go the way they should. 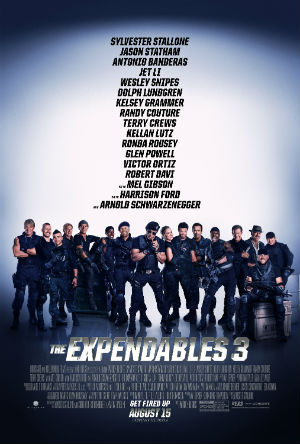 Things go boom, bodies pile up, and it all comes crashing down to its inevitable end. Directed by Patrick Hughes, it's hard to see what visual flourish he's going to bring to the English-language remake of The Raid, but we'll have to reserve judgement for that one. As it stands, this is a pretty anonymous film despite the almost ludicrous cast list, and it's fair to say that as a director he gets the hell out of the way and lets things work out the way they're supposed to.

Much has been made about the lower rating ("only" PG-13), but I found the lack of redundant CGI blood misting a welcome change. There's certainly no shortage of body count - the sheer mauling of dozens is just done as a mass of motion blur and off-screen innuendo, allowing these sociopaths a kind of clean conscience as they power-wash the brain matter off the helicopter footpads, presumably during the film's dissolves to black.

As per a sentiment I'll credit to Jurassic Park, amassing these guys all on screen asks the cinematic question "could we?", but never the follow up "should we?" In fairness to all involved, The Expendables 3 is less execrable than its predecessor, and comes almost close to being enjoyable. More a showcase of back-catalogue fun than a hoary rehash of greatest hits like number two, you've got a pretty good end-of-summer action film, if you've already exhausted all the other, better films currently playing in theatres.

And that, for many, will be more than enough to recommend this film to them.