Destroy All Monsters: I Don't Want To See A Movie Called SUICIDE SQUAD 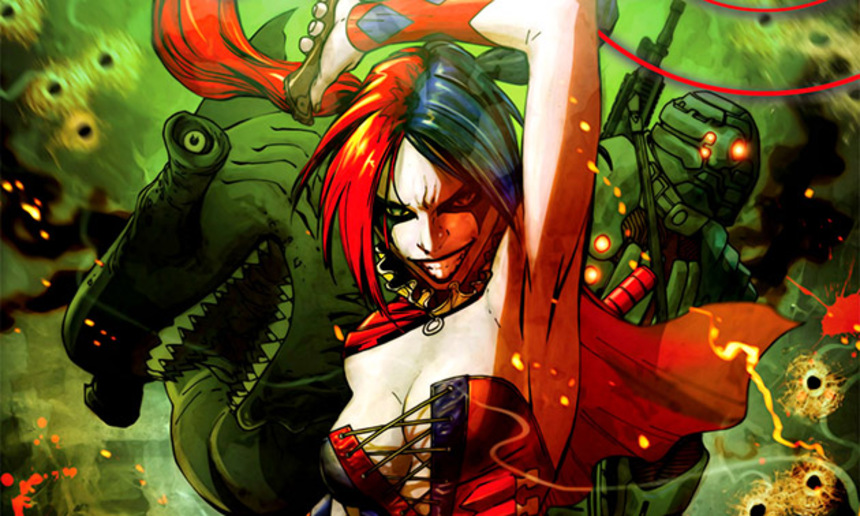 It's the title of an existing comic book, and I understand that; and given DC's track record, at least since Watchmen, it's likely to be a hit-and-fade barrage of generic marketing bolstering a bafflingly undercooked Guardians of the Galaxy knockoff that will come and go and be forgotten. The Suicide Squad movie probably won't amount to much, and yet it already skeeves me out.

Something about that title. Something about the idea of a hundred thousand cherry-bright movie posters with the word "SUICIDE" in a ragged font, all over America, hawking a movie about a gang of lovable anti-heroes who would normally be society's villains, but are here corralled to go on impossible missions and maybe get killed - but that's okay, because see above re: villains. They're disposable.

My colleagues hasten to point out that the suicide-mission team movie is not a new idea. No, it isn't. But what's been done before is not a justification for what's being done now; cultural context changes over time, and we've rarely had a better year to examine that phenomenon - on a variety of battlefronts - than 2014.

And it isn't really the idea of a DC version of The Dirty Dozen that has me concerned, anyway. My concern extends from the top down, not the concept up. It's the marketing: the front-and-centre appropriation of a key mental health discussion to brand, glamourize, and eventually fetishize a group of fictional patients of Arkham Asylum, itself a troublesome holdover from a different era of the conversation about mental health.

Marketing is built to glamourize; and comic book movie fanbases are built to fetishize. Comic Con will go nuts for this thing. There will be people walking around major cities in broad daylight in costumes of the Suicide Squad in the summer of 2016. There will be a special-edition blu-ray of the movie that comes in the Joker's head, or something, sitting on peoples' mantles the following year. There will be a lot of young people (and not so young people) who will enter the world of the suicide-mission team movie for the first time, via Suicide Squad.

Do you think there will also be a robust and contextual conversation about suicide, addiction, mental health, and the consequences of self-harm to go along with the bus-shelter posters of Harley Quinn and the Joker?

Does there need to be? Am I taking this too far, pinning too much on one word, one movie, one brand? Certainly. Suicide Squad is just one example of all of those things. And the property is wholly unseen at this point, save for a bit of casting in the past few weeks. I know next to nothing about who this movie is being designed to serve, and my fears about its content and presentation are based on DC's (and, let's face it, Hollywood's) track record to date, and the more recent run of the Suicide Squad comics, which are the only ones I've read.

For all I know, it will be the most sensitive comic-book blockbuster ever made, and will shatter stereotypes about mental health left and right, while Will Smooth shoots people or something. I can hope.

But I look at that lineup - Harley Quinn, Deadshot, Boomerang, the Enchantress - and I can't help but align it to the vacuum of moral responsibility that creates blockbuster events like Man of Steel, for example, and then wonders why people had a problem with that film's ending. I see all the furor around Jared Leto getting cast as the Joker and I can't help but cast my mind back to the other Joker, and the mushroom cloud of imagery - some intentional, and quite a bit not - he represents.

This will be the first movie to tackle the pop cultural problem of the post-Heath Ledger Joker. The horrific circumstances surrounding Ledger's version of the character - from Ledger's death by drug overdose to his posthumous Oscar to the shootings in Aurora four years later - catalyzed what would already have been an iconic performance in the history of genre movies. They layered freight and meaning onto a characterization already deftly, and frustratingly, suggestive in its intent: a whirling soup of provocative text and meta-text on subjects from terrorism to fair-market economics. And, of course, insanity.

The Joker is too potent (read: lucrative) an icon for DC to ever consider leaving him on the shelf, but his emergence in a post-Ledger, post-Aurora world is loaded with complexity regardless. Just in this past year, the public conversation around gun violence, suicide, addiction, mental health and celebrity culture has been crucially, brutally advanced. Robin Williams and Philip Seymour Hoffman have both died in 2014 (both, coincidentally, have been linked to rumoured roles playing Batman villains over the course of their career). Both have died by their own hand, in public, in front of us, just like Ledger did six months before The Dark Knight was released. These men are all lodestones in the conspiracy of silence around the issues that took their lives.

Do I want to see a movie called Suicide Squad? No, not particularly. Not if it's part of the ongoing effort to slough off the real, complex, and dangerous meaning of the word suicide and transform it further into yet another brand for enviable badassery. I don't find it enviable. I don't find it badass.

See the thing is, as horrible as this year has been on at least three major cultural and socio-political fronts, I believe we are moving the needle on all of them. Mental health issues are one of those fronts. It may be a war of inches at this point, but they're inches I believe in. This would be a great time for more responsible dialogue. Suicide Squad, I fear, isn't it.

Do you feel this content is inappropriate or infringes upon your rights? Click here to report it, or see our DMCA policy.
David AyerDC ComicsJared LetoSuicide Squad