Review: SUICIDE SQUAD, Not So Painless 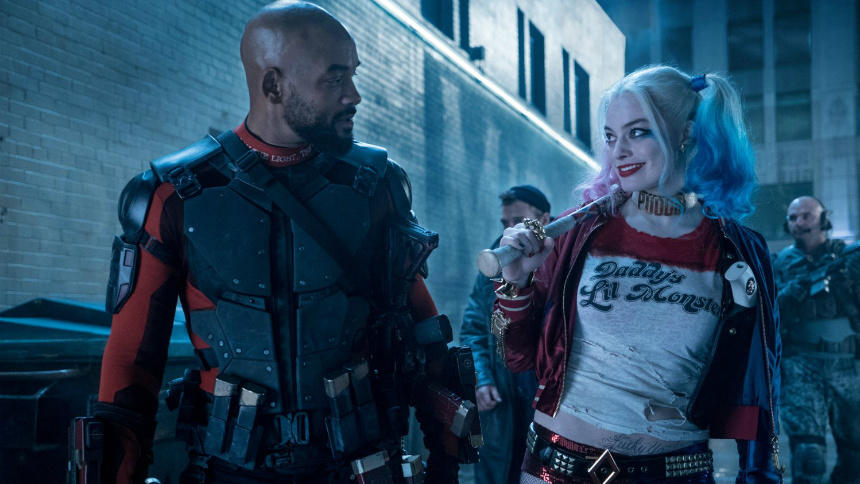 Warner Brothers has aggressively set out to course-correct its still-fledgling DC Comics Cinematic Universe with Suicide Squad - a villain-fueled movie that wants you to believe it's off the hook, man!

It's no lie that director David Ayer's (Fury, the tank movie) packed-to-the-hilt comic book adaptation about incarcerated super villains being manipulated into working together for the great good is an easy improvement over the previous DC film, March's Batman v Superman: Dawn of Justice. That movie is a misfire so dark, so boorish that it makes this film's murky palate seem downright lively. For a while.

From the first moments of the green and pink tinted industrial steel Warner Brothers logo, Suicide Squad serves up a punchy, extended meet n' greet with its stable of oh-so-rascally comic book villain protagonists. The movie may be as duplicitous as its own anti-heroes, in that it doesn't actually have an original bone in its body. Taking creative cues from all over the map, the film manages to get by in hiding this fact under an abrasively hip lair of of gaudy color, wild freeze-frame graphics, and amoral (so we're told) anti heroes. Again, for a while.

Unable to maintain its supercharged barrage of fury (not the tank movie), sound and yet more would-be fury (still not the tank movie), Suicide Squad is a movie almost as full of piss and vinegar as it is full of crap. Ayer has a desire to achieve maximum charisma with these characters; this is aided tremendously by having scored an excellent cast.

Suicide Squad's first half hour is the movie at its best, frenetically copping Scott Pilgrim as we meet character after character, learn their world, and what's what in that world. And there are a lot of characters.

Viola Davis is the perfect Amanda Waller, a U.S. intelligence officer who would require the describer of “no-nonsense” to be multiplied by six. Waller pitches the Pentagon top brass on her plan to collectively force super-powered baddies into her service with the reasoning of “What will we do if the next Superman isn't so benevolent?” (What super hero universe is she living in??)

She gets her way, and the Suicide Squad is formed: Will Smith is the mercenary killer Deadshot, a single father who really misses his cute little daughter. Jai Courtney is Captain Boomerang, a not-so-well-armed villain who previously got rounded up by The Flash. Adewake Akinnuoye-Agbaje is Killer Croc, a sewer dwelling reptilian man who looks really cool but doesn't ever do anything. Jay Hernandez is the tattooed and self-tortured Diablo, a fire-controlling softie who likes to cry over a little flaming pole-dancer that he repeatedly whips up in his hand. Weird…

And of course, there's Harley Quinn, played by the currently omni-present and talented Margot Robbie. Once a criminal psychiatrist who lost her heart and then her mind to the worst inmate at Arkham Asylum, The Joker. In multiple flashbacks we see the ways he's coerced and abused her with his messed-up attraction. She, of course, can't resist, and is always waiting for him in “someday my prince will come” fashion. 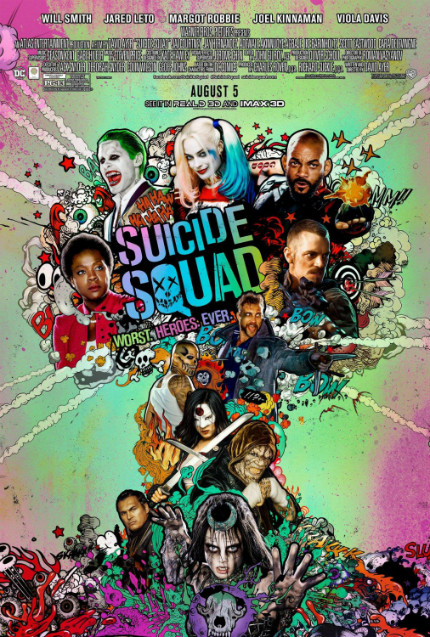 Theirs is a joke-tastic love, brimming with co-dependent romance and twisted affection. While this incarnation of Harley Quinn and "Mistah J" are true to what's always been implied about their sick relationship from its beginning with Batman: The Animated Series, it is nonetheless disconcerting to note the number of cosplay girls taking up her character.

Will guys fall in line similarly with Jared Leto's slick, lusty Joker? In any case, not far beneath her sassy "girls kick ass" veneer, this Harley is nothing short of a contemporary feminist's nightmare. Her traditional domestic fantasy of her life with this Joker flies in the face of his own likely monogamy. Then again, her many charms do keep him coming back...

Anyhow, the team gets pressed into service when an all-powerful evil entity known as the Enchantress breaks free of Waller's control. Miss the old school lady Zuel in this summer's Ghostbusters? You're in luck, she's here to fight the Suicide Squad, in an updated Power Rangers-worthy guise! The final showdown of the film consists of one teammate after another taking turns striking at her while she stands there shooting off lightning and proclaiming how boringly powerful she is.

Holding the leash of the Squad in the field is military man Rick Flag (Joel Kinnaman). Coincidentally, Flag loves the girl that the Enchantress has possessed (Cara Delevingne). He's brought the humorless mystical swords-woman Katana along (Karen Fukuhara), bearing a great likeness to her comic book inspiration.

But sadly, as solid as the cast is, the initial rock n' roll enthusiasm Ayer set out to “wow” with stems from a place of male adolescent tall-can energy drinks and Axe Body Spray. (Tough guys! Cool gear! Hot girls! Loud music!) And like those energy drinks and body sprays, it all wears off after a while. The film can only posture, primp, pose, and pop off lousy one liners for so long before going limp.

Worse still, the screenplay really doesn't know what to do with its movie full of bad guys. So, it makes them into good guys. (Snore.) There are a lot of interesting characters and seemingly interesting characters running around, and even a few nifty cameos. But most viewers would be hard pressed to name any who experience an arc beyond "fall in line with the team/"family".

Visually, it appears that the producers shifted expenses in the lighting department into securing music royalties. The sheer number of classic rock needle drops is staggering - the hits DO keep on coming. But simply being able to write a big fat check for all your favorite tunes and actually needing them are two different things.

Opening one's movie about psychologically unhinged villains with The Rolling Stones "Sympathy for the Devil" is as brazen as it is tired. And “Sympathy for the Devil” is in no way a song that should be considered tired. Its use in a film must be earned. For a moment, Suicide Squad seems as though it might be earning it.

But no. It becomes quickly apparent that the external needle-drops in Suicide Squad are not of of the fun (and motivated) Guardians of the Galaxy mold, but of the early Zack Snyder mold (think of his sparky song picks for Dawn of the Dead), but worse. The sheer power of the songs themselves makes Ayer's willy-nilly appropriations all the more frustrating, casting major, personal hits of the past in the most literal of ways:

Fade up to a secret facility in New Orleans. Cue "House of the Rising Sun". There is... A house... In New Orleans...

Later in the run time, cut to Amanda Waller's armed assembly of the villains on a tarmac. Cue "Seven Nation Army" by the White Stripes.

Instance after instance of this, we have meaningful pop culture being reduced and wasted in the service of a wannabe punk film that can't be bothered to source any newer, non-established music. Or at least deeper cuts. One wonders if David Ayer has heard any new music since 2003.

While watching Suicide Squad, one may sit back and imagine a near-future full of more DC Comics-based properties that play just like this. “Yeah, okay. At least it's not horrifically unwatchable and offensively dull.” But once this glo-stick viagra milk shake has run its course, the realization sets in: It's a total con. And not even a very good one.

Do you feel this content is inappropriate or infringes upon your rights? Click here to report it, or see our DMCA policy.
David AyerDC ComicsJared LetoMargot RobbieSuicide SquadWill Smith