Get Eaten By A Dinosaur In IRON SKY 2! 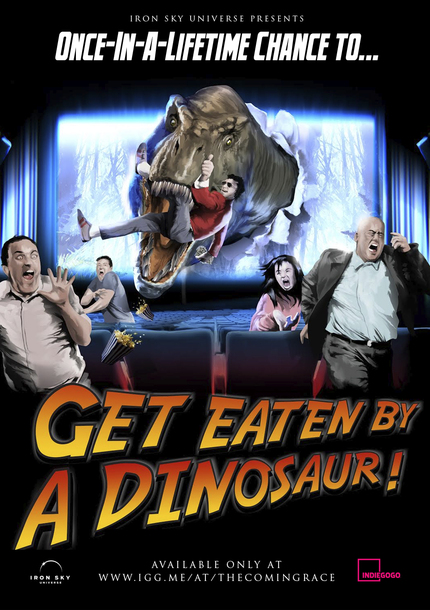 Now here's an opportunity that doesn't come around every day: The Iron Sky team have themselves a very hungry dinosaur that needs feeding and you could be lunch. Yup, they're throwing down with another crowd funding effort and the big reward on offer is one hell of a fantastic death.

FANS TO GET EATEN BY A DINOSAUR IN IRON SKY 2

Iron Sky The Coming Race filmmakers have launched today a new perk to the fans and fan funders - to get eaten on the big screen by a dinosaur. Pioneering a new level of fan involvement, the director Timo Vuorensola and Iron Sky team offers fans a possibility to support the film and choose a way a dinosaur consumes them in the film.

Three different levels are introduced - on the lowest level, fans get to be a part of a mass scene of fleeing humans being killed by a bewildered dinosaur. The second level, fan funders are given a possibility to have a close-up scene of their demise. On the highest level, one lucky fan gets chomped to pieces by a T-Rex in great detail and multiple camera angles. Fans are also offered a role as a Bad Ass Vril and become a lizard people.

"A flashy death scene can be one of the most vivid moments in a film", director Timo Vuorensola states. "Instead of tossing a great death to random extras, I want to offer this opportunity to the people I'm doing this film together with - our fans."

Producer Tero Kaukomaa sees this also as a great way for the most enthusiastic fans to show their support on the production and be a visible part of it. "Fans has always been the needed nutrition to keep us going. Its great to get that on the screens." Kaukomaa says.

Although getting eaten by a dinosaur sounds violent, there's no real danger involved.
"Our dinosaurs are well-trained, and we assure no fan gets hurt in making the film", Vuorensola adds.

The new "Get Eaten By A Dinosaur" -perks have just been launched at the crowd funding platform IndieGoGo: http://igg.me/at/thecomingrace

This is crazy, but definitely has some vision, especially where the lizards are involved.