Morelia 2014 Review: MATRIA, A Documentary That Offers Little Beyond The Anecdote 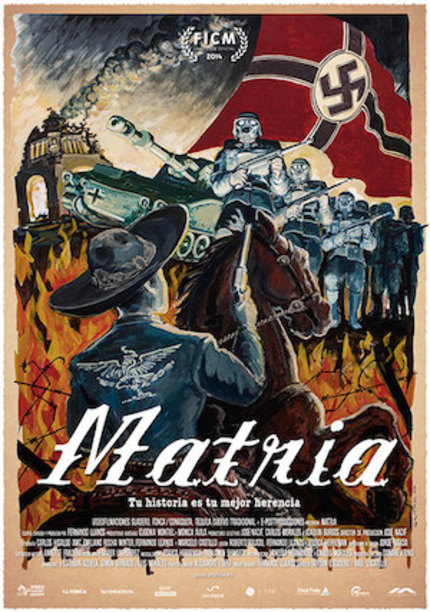 It's not strange that if a documentary begins as a very personal journey, the audience wonders why they should care for it. I wondered that myself while watching Matria, a doc in which its director Fernando Llanos is trying to find out who his own grandfather was.

Llanos serves as the narrator too, firstly explaining that his grandpa Antolín Jímenez passed away just months after he was born, hence he didn't know him at all. Naturally, he is interested in learning about his own blood, and the fact that his family seems to be hiding a story about Antolín fuels this work. But the first task of Jímenez is certainly to engage the audience as well.

Actually, with a story like Antolín's, it is kind of easy to make the audience understand why a documentary about him exists. This doesn't necessarily mean there's going to be a great discovery, but the fact that the director's grandfather fought in the Mexican Revolution, knew Pancho Villa, and had a long political career, among other activities, has at least social relevance. While Matria has an attractive aesthetic, with a glimpse of vintage photographs and in general of the past of Mexico, the film never manages to explode through its engaging premises (the several things Antolín did).

Matria works best as a simple resume of the period that followed the Mexican Revolution. A man who enjoyed the post-revolution politics, Antolín secured power, important friends, and all the other benefits. But the main thing about him, at least the anecdote that is selling this documentary, is how he led an army of charros who were ready to fight the Nazis if a German invasion happened. This is a curious fact that you learn with Matria; the doc proves that while the army of charros was documented at the time by the press, nobody knows about them, not even the surviving members of the Escuadrón 201, the only Mexican squad that actively participated during World War II.

Matria makes you learn about the charros, and that's fine, but this anecdote has no profundity. In the end, the doc is more about the personal side of Antolín and his family. Like I said, some members of the director's family are hiding something from him about Antolín, so the documentary's final part is mostly about finding out this (dark) side of the story.

What's really frustrating, aside from the pretty weak narration by Jimenez himself, is how the eventual discovery doesn't even impress the director. He does his work as a documentarian and exposes the two sides of the argument. However, as he learns the truth, he strangely acts as if nothing is actually relevant. "I think those people are exaggerating with their accusation to my grandfather, and I don't believe those people have affected my own family either," is more or less - without the details/spoilers - his final conclusion, confirming the film has not much to say to a wide audience.

Do you feel this content is inappropriate or infringes upon your rights? Click here to report it, or see our DMCA policy.
MatriaMexican CinemaMorelia 2014Morelia International Film FestivalFernando LlanosDocumentaryBiographyFamily